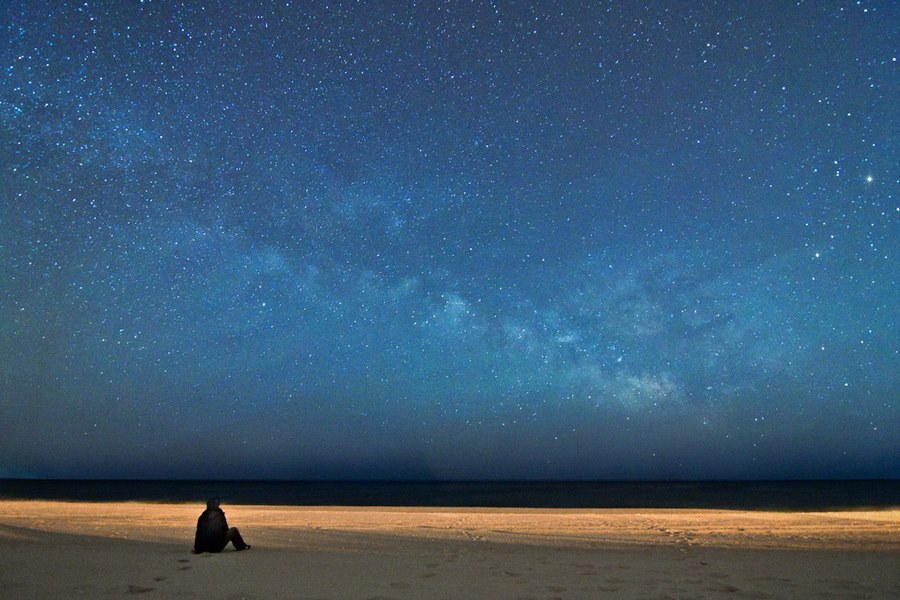 Q: What is the function of seeking?

Q: What is truth?

A: Actually, again, it would be a limitation to try to say “What is truth?”, “What is consciousness?”, “What is silence?”, because you and I are going to agree that it is this. But we agree on two words, which have different meanings for us according to culture, to mind; we will understand the words in different ways. “Oh yes, we agree.” We don’t agree, we just pretend.

So truth is a word used to describe the fact that even if you have three wives and three husbands and three cars, something is not totally satisfied and you want something else—and whatever you want, when you get it, very soon you want something else. So, this longing for what seems to be something, for a long time, can be called truth or consciousness, but the word does not reveal what it is. The word makes it more objective. That’s why in Sanskrit we use the word anaman: what has no name. So whatever name we give it is a pedagogical tool. It’s what you cannot question. You can give up everything; but this longing, at some point, you cannot give it up, because it is what we want in every action, in every thought, every perception. You can never give up this fore-feeling.

Q: Is truth empty of meaning?

A: To think there is no truth, or to think there is truth, are both thoughts, and they’re both respectful, but they refer to the same thing—according to my brain, to my culture. If I’m a communist I will say,“There is no truth; that’s the truth.”If I’m a Buddhist I will say,“The truth is the trikaya, the truth is Buddhahood.” Why not? We’re talking about the same thing in different clothes. So at some point you stop focusing on the clothes, and you feel, in a way, what it means, without making it an objective meaning. But it always remains a fore-feeling.

Q: How has your yoga practice evolved?

When you see your pretension, it is what is called humility…but there’s no room to be humble—only in pretense. So, the seeing gets more and more intense. It’s endless because perception is endless—but it’s not endless in time, because time is what comes and goes. Little by little the focus shifts from time to the intensity in which time appears. So there’s really no evolving—nothing changes, but you don’t focus on things anymore.

A: Jean Klein had two teachings—he was teaching advaita vedanta for the very bright people, and tantra for the very stupid ones. So, advaita is an elitist teaching which is only proper for people with the highest level of mental discrimination, who are immensely purified. That means, who have no link with emotional life. When you read Shankara, when you read the commentaries of the Mandukya Upanishads of Gaudapada, you see that they don’t talk about your wife and children. That’s for the exceptions. And you need the presence of somebody really grounded in his own absence. You cannot inhabit this openness on your own, according to the tradition.

Tantra is for the stupid. For tantra, you do not need anything but to be more and more open to the fact that we are constantly in reaction, we are constantly in pretense, we are constantly in thinking, in defending, in trying. So, this teaching is very stimulating, and it doesn’t require any teacher. The teacher is life and there is no room to achieve anything there. So according to the level of his student, Jean would use one or the other teaching. Of course they were not black and white; but still, there was a kind of strong line.

Nondualistic teaching excludes everything to concentrate on the intensity. The tantric teaching includes everything, because there’s nothing other than truth. So there’s nothing to exclude. One is democratic, the other is elitist—that’s the tantric point of view. From the vedantic point of view—they see it in a different way. And there’s no contradiction, because the Indian traditions are multi-fold. It may seem to be in opposition, but it is not.

Q: How does the tantric tradition compliment advaita?

A: Advaist tradition is considered for the elite. The Upanishads don’t give you advice on how to live your life, they don’t tell you what to eat, they don’t tell you how to make love—they tell you to concentrate on the self. It is beautiful for the people who have this ability… but most people can concentrate on the self when everything goes well, but when their wife sleeps with the neighbor, when their child gets killed, when they have cancer, their concentration is weakened. Then the tantric tradition has a role to play.

Q: How can the body be used as a tool of exploration?

A: There’s no such thing as a body—the body is a thought. Trying to find oneself in the body is like trying to find oneself in a car or in a relationship: it’s a fantasy. The body is only there when it is thought. In deep sleep there is no body. Every time you go to sleep at nigh,t you are so happy to go to sleep, and to pretend “I am nowhere, I am everywhere”—it’s very sweet. But the facts of life challenge this evidence; it is not real evidence.

You could be real evidence—Ramana Maharshi never practiced any yoga, Maharaj didn't either—none of the the great sages have done yoga. Meister Eckhart, Ibn Arabi never stood on their heads and they weren’t missing anything. And I know so many people who do yoga all day long, and, well, we wonder why! So it’s not there—it’s not a question of for it or against it, it’s just... it’s a question of intensity. The body is feeling and whatever we call life is our body. We don’t meet life, we only meet our body. So it’s a kind of respect, in a way, to listen—not to listen to the body, because the body is a concept, but to listen to what we imagine is a body. And with listening, the preconceptions we have as a body will change, and as the preconceptions we have as a body change, the way we feel the world changes, because the way we create the world is just a projection of the way we feel our body.

So tantra, in a way, is just acknowledging this fact, and inquiring for the sake of it, because life is inquiring. There’s no goal, you don’t become anything, you’re never going to change anything, you’re never going to achieve anything. But the beauty of life, the intensity of life is asking without asking. Asking without expecting an answer. If you expect an answer you live in projection, you cannot be present.

My teacher used to say: “Waiting without waiting.” There’s waiting which means detachment, which means openness—but “without waiting” would be a direction away from detachment. So, myself, I use the word intensity. It’s a word, it has no meaning, but it is the same thing. So there is no contradiction. For some people bodywork would be a distraction, because they could not approach it without an intention. For them it would be a dispersion. For some people, not to do bodywork would be a dispersion, because it’s too easy to read the Upanishads when your husband is faithful, when you’re in good health, when you have money, when your country is at peace—so you must see things in a more creative way.

And it’s not that we have a choice. Things unravel the way they need to. So there’s no contradiction.

Q: What was the role of the bhajan in the advaita tradition?

A: There is story of Maharaj doing bhajan—pictures of Krishnamurti and Vivekananda and Ramakrishna and his guru—and there was a picture of a very fat man, with a big belly like me, but with a big moustache, incredible eyes and a big sword. So he was putting the kumkum on and they asked him “Maharaj, who was this man?” And he said,“Oh, this man is the man who killed all the English in my village!” So that’s what people see, here in a fantasy world, but Maharaj was very creative. Nonduality is not something and bhajan something else. It’s just the intensity of life. It is our mind that wants to decide:“Is it dual, nondual, dual-nondual, nondual-dual?” And it’s not only western, because in India we have five vedantic traditions, not three: nondualist, dualistic, half-dualist half nondualistic, half nondualist half dualist, dualist nondualistic, dualist nondualistic dualistic nondualist, and so-on. So Indians are like that too.

In Kashmir Shaivism, it’s endless, the level of possibility. That’s the beauty of mind. There are so many kinds of music and birds and thoughts, same thing. But it is never a contradiction; that’s the beauty of India—nothing is considered superior. It’s only here that we want to know “what is the best,” which means nothing. The best for whom? The best for me, but this me has no meaning. There’s no best. Everything has its place.

There is no way which is better. Abhinavagupta refused to give initiation to anybody who would wear the Shaiva marks, even back in the 10th century. There’s no best anywhere. That’s the root of Indian culture.

Are we attached to preference here in the West?

So any situation will bring you back to see that you’re just pretending, “Oh, I better marry this one.” Then, “No, I better divorce this one. ”Only living in this fantasy. In India you don’t get married for you—you get married because, in a way, that’s life. I’m not saying one should follow Indian tradition, because as with all traditions, they have their beauty and their weakness. But it is not as stupid as the way we think from here, because it cuts off all your dynamism towards something.

If you were born in India you cannot become anything. So the only space available to you is intensity. Everything else is cared for. You don’t get married for love, you don’t marry for any reason—whatever you do, it’s not what you want to do. So you have to find freedom outside doing. But, of course, it has its limits too. It has its frustrations too, it has its violence too—it is what it is.

The idea that people follow here: “What is best for myself? Which tradition should I follow?” must be seen at some point as the ultimate misleading attitude. I’m not here to follow the tradition I like. The tradition for me is the one that’s going to challenge me—and this is the one I’m going to dislike. Because what I like is what gives me security. Security belongs to ego, so I must follow the tradition I dislike the most. That’s the good one for me. If I dislike it, that means I fore-feel that I am challenged by it. That’s the one I should do. What I want to do is always the wrong path. What I don’t want to do is what I should do. That’s the tantric way. If I don’t want it, it’s because I have a defense. This defense stops me from breathing life. To see the defense, I must encounter it. That’s the only way.

Generally when I have a defense, I go somewhere else, or I follow this tradition because its easy. It fits me, I like it, I feel comfortable. That’s the ego talking. One must always go where we don’t want to go. That’s the right way. That’s the tantric way.

This is the second half of an interview with Eric Baret at the 2014 SAND conference.
Read the first half or Watch the full video.