As this is a website dedicated to Science and Nonduality, it’s appropriate to define terms. What does Nonduality mean? Nonduality is derived from the Sanskrit Advaita, meaning not 2. In other words, Oneness, “one without a second”. This may well be a statement of the obvious to readers of this site, but what many have made of this does not always correspond to the original texts. 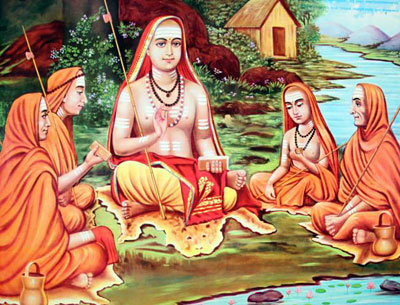 Advaita was brought forward by the famous sage Adi Shankara who revived the monastic tradition in India about 1,200 years ago and directed the establishment of the 4 seats of the Shankarcharya tradition. They are still active to this day. He was a renowned debater and wrote key commentaries on the Veda - particularly for Vedanta, the texts of Advaita. (Brahma Sutra, Upanishad, & Bhagavad Gita)

Lived
The first key understanding is that true Advaita is not a philosophical concept or something gained from learning. It is not sync or connectedness or togetherness. It is not even an experience. It is a state of being. We may debate oneness, but it must be directly lived to be known.

“Taught by an inferior man, this Self cannot be easily known, even though often reflected upon. Unless taught by one who knows him as none other than his own Self, there is no way to him, for he is subtler than subtle, beyond the range of reasoning.” (Katha Upanishad 1.2.8)

Illusion
The second key understanding is about the nature of the world. Shankara only briefly taught that the world is an illusion, until he was corrected by an experience of the Divine Mother. The poem Ananda Lahari was the result. He said that the world in itself cannot be real because it is impermanent. But since the world is experienced, it cannot be non-existent. “It can never be that what is actually perceived is non-existent.” (Brahma Sutra Bhashya (commentary) 2.2.28) Therefore the world is neither real nor unreal (sattasat). Rather the reality of the world is not in an of itself but rather is an appearance of Brahman, which is real.

This is illustrated by his famous quote:
“The world is unreal
Only Brahman is real
The world is Brahman”

“The whole world is nothing but Brahman, the supreme.” (Mundaka Upanishad 2.2.12)

Elsewhere, Shankara observed that when tamas guna (a quality of inertia) is dominant in the person, they perceive the world as real in itself, as most people do. The world is as you are. When rajas guna (fire, activity) becomes dominant, the person does see the world as illusory. When sattva (purity, clarity) becomes dominant, then the world is seen as Lila, the divine play. In other words, “world as illusion” is an effect of a stage of development. It is not reality.

Even sattva must be superseded. “The face of truth is hidden by a covering of gold.” (Isha Upanishad 15) This means even sattva obscures the truth. In the Bhagavad Gita, Krishna tells us to “be without the three gunas”.

Self Realization
A key stage of Transpersonal development is commonly known as Self Realization. This is not something a person achieves. Rather, it is described as the Self waking up to Itself here, through this apparent person. This is also known as liberation. Fully established, it is sat chit ananda (absolute bliss consciousness) or nirvana.

“He who knows this enjoyer of delight - the Self, the living soul, always near, lord of what was and what will be - no longer hides in fear.” (Katha Upanishad 2.1.5)

However, this is the awakening of the subject, the perceiver or observer. The world is still seen as separate and perhaps illusory. There is an inner sense of boundless wholeness which some confuse with nonduality. But as long as there is a distinct world, this is not it yet. In fact, this is dwaita, duality. Self + world = 2.

Some teachings discount talk of further development as illusory or misguided. Or they see talk of stages as concepts that are a barrier to living it. While I fully agree the map is not the road, a map is very useful during the journey. And then it is put aside. Plus, if science is going to come to understand this process, we’re going to have to define the stages.

Happily, the Vedic texts have done this for us. Skipping a great deal to focus on the point of this article, the next major stage is the true beginning of Nonduality.

Unity
As Self Realization matures, there is typically a refinement of perception resulting from the sattva shift in perception of the world, mentioned above. We come to recognize that underlying the appearance of the world is the same Self as within.

Shankara described 4 Mahavakya or great sayings, each drawn from an Upanishad from each of the 4 primary Veda. We might call these the core recognitions, though how they unfold in this or that journey varies. They are well known:

I am That, Thou art That, All this (Self) is That, That alone is. (That, in this case, is Brahman)

With the initial Unity realization, there is no longer an “inside” and an “outside”. Rather, all experiences and the world are contained within mySelf. Where the subject awoke in Self Realization, now we awaken in the objects of perception and all is recognized as mySelf. Subject and object merge, leaving only experiencing. This is the dawning of true nonduality.

Simply from living life, we experience and become everything that arises. All the layers of experience are progressively united. This is the actual message of the Brahma Sutra: the progressive realizations of oneness into an “aggregate” whole. This goes progressively deeper, including memory and past experiences. It also progresses into the world to “the farthest reaches of the universe beyond perception.”

Over time, it comes right out into the surface of experience. When we touch something, we feel the object. But because we are also the object, we feel being touched simultaneously. This is very literal. As you might imagine, it is a profoundly intimate process.

Near the end of this unfolding, even the physical body is recognized to be the one Cosmic body. There is only one person here (Narayana or Virat), appearing as many, much as Krishna describes in chapter 11 of the Bhagavad Gita.

At the higher end of Unity, consciousness (Atman) is recognized to be both globally aware and aware at every point within itself. Where in Self Realization, it was the point value that woke up to itself (called Kaivalya (singularity) in the Yoga Sutra), now it is the whole waking up everywhere. With Atman fully awake to itself, it can turn from ever-looking in on itself to observe what is greater still.

Brahman
What next occurs is known in the Vedic texts as the Great Awakening. This is when Atman recognizes it’s origins in Brahman. We look beyond consciousness, beyond even the subtle duality of existing or not existing into the height of nonduality.

“Using the nature of his own Self (Atman), like a lamp to illumine the true nature of Brahman.” (Shvetaashvatara Upanishad 2.15)

During my talk at SAND15 US this fall, I’ll be going over this underlying process in more detail. While the experience of this varies widely by person, the same basic process is underway. This is much like we all experience puberty but how it unfolds varies by person. And it’s very helpful to understand what is unfolding.

As individuals and as a culture, we have deeply disconnected from the realm of the body

Where do Mathematics Live? - SAND19 US

Francis Lucille's dialogue with the audience at SAND19 US

The Soul of Transformation

Michael Meade speaks so beautifully about the role of "descent" in any spiritual journey.

In the Sufi tradition, there is a saying, “Die before death.” For Sufis, this is an exhortation to befriend death and the process of letting go as a daily spiritual practice.

What Gives Form to Consciousness - SAND19 US

Orland Bishop has a conversation with a small group at SAND19 US.

Heart-break is Heart-Opening — The Gift of Grief

In his meetings Rupert explores the perennial non-dual understanding that lies at the heart of all the great religious and spiritual traditions.

The Direct Path to Peace and Happiness

A conversation with Rupert Spira, contemplating the Nature of Experience.

Abiding On The Threshold

SAND Archive - The Significance of This Moment

We live in a culture caught in the illusion of time