Tiny Grandeur: Awakening the Separate Self 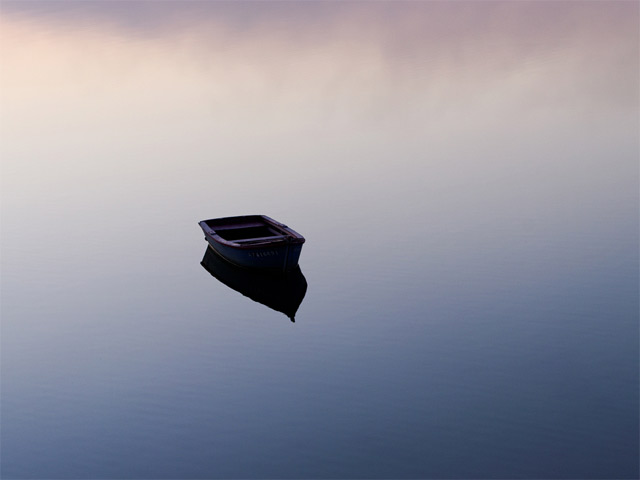 The idea of a real—and yet illusory self—is easily understood if we think of this metaphor: there is a river, broad and flowing. Near the edges of the river, nearer to the shore where the flow of the water is slower, eddies sometimes form. These little whirlpools gather into themselves the flotsam and jetsam of the river’s life: bits of twig and leaf, a whirl of foam, all slowed down enough to form by a bend in the river. The addition of this material to the small whirlpool actually helps the whirlpool maintain is twirling organization better. It becomes ballast and the energy of the river, still feeding into this small portion near the shore, helps the eddy—which, as we know is doomed to disappear—maintain its individuality a little while longer.

The individual person is like this eddy. From one perspective, it would be wrong to say it is an illusion. It is clearly there. It traps floating material. It adds its own dynamic to the river, supporting the river’s slowing its speed near the shore, where fish and turtles and frogs lay eggs, in the quieter shallows. Yet, on the other hand, it has no existence apart from the river. It is made of the river and nothing else. The water, the things that fall into the water are all part of the river and the eddy, while appearing separate for a while, is destined to return to the undifferentiated water of the river, submerged once again in the whole. Then, because of the living dynamics of the whole, the inevitability and constant potential of the All, represented by this the river, the eddy emerges, at some other place and time, collecting, whirling and finally, disappearing, only to arise again.

The wonderful thing is: when we begin to see the full picture, the interplay of the Absolute and the Relative (to now use the real concepts we are talking about), we are not trapped by the so-called bigger or Absolute view or the so-called smaller relative, view. We are free to be human beings, separate individuals, in a vast river.

The eddies form, dissolve, float and move. To say that they are separate and real is to deny what they are really made of. To say that they are only part of the river is to ignore the beauty of the small swirl and the fragments of life captured within its twirling water. Constant manifestation that comes from Nothingness. Multiplicity of Being that comes from the One. Our personal self is like this, real and unreal, changeable from one moment to the next, and all of the various guises are still part of the whole and not to be ignored.

It was through this that I understood the Who-Is and how it naturally calls out for the right nourishment as it morphs from one perspective to the next, from one view to the other. This who-is calls out for truly nondual food, nourishment that is keyed to its being-ness, through which it can grow into the that unspeakable wholeness that is the river and all it manifestations, taken as a truly Single One.

Sometimes we are small and separate. Our help then needs come from the separate. When I pray to Jesus or God, or chanted the name of Rama, or asked Ramana or Ramakrishna to help me I am calling out from my separateness to something that seems separate. That holy Separate One always answers.

Sometimes we are wide and vast. Our help then comes from this wideness and vastness. No effort, but letting go. No names but No Name. No sound but Silence.

Because all the Who-is’s are facets of a single thing, each time we correctly relate to who we are, without judgment but with care and sincere joy, we help that who-is continue on its journey of constant change. When we help the small and separate, we see it’s secret heart is really vast and open. When we help the vast and open, we see it also depends upon the small and particular. In this way, the who-we-are, changeable like the tides, leads us to the next step. And since each step is holy, we are never really apart from the whole. It is available in its tiny grandeur at every moment.