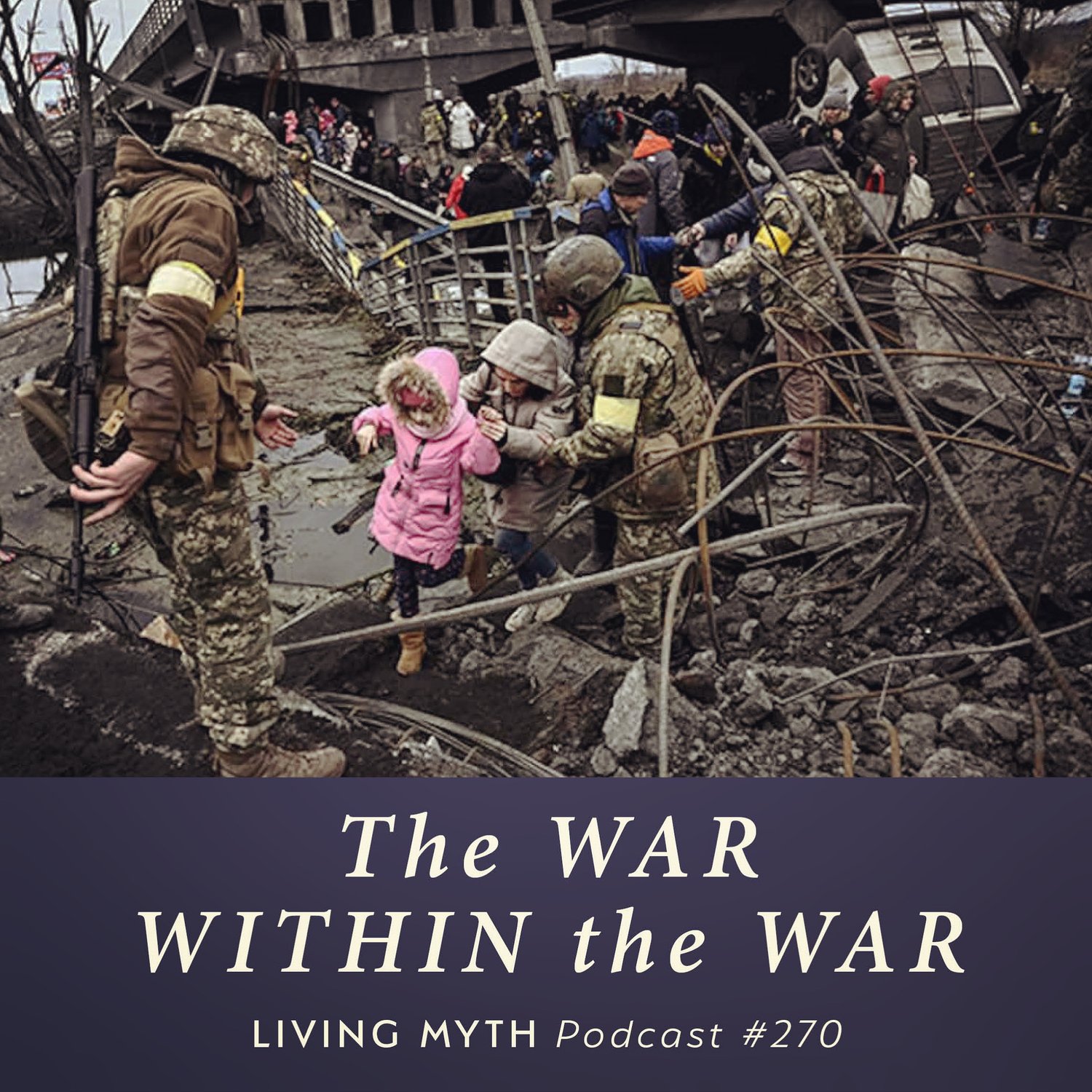 On this episode of Living Myth, Michael Meade addresses the war within the war being waged on Ukraine. In order to justify the cold-hearted attacks on civilians and mindless destruction of towns in Ukraine, Vladimir Putin has waged an insidious war on truth in the minds of the Russian people.

I feel a great sadness for all the suffering and heavy losses befalling the people of Ukraine. I also feel a deep respect for the way so many Ukrainians are standing for the ideas of freedom, facing down the engines of war with a kind of nobility of spirit that can only come from the part of the human heart that values truth, beauty and the meaningfulness of life.

As the Ukrainian people suffer from the rain of bombs and reign of terror that Vladimir Putin has unleashed upon them, it can be shown to be not just an invasion of Ukraine, but also an attack on democracy, on the ideals of freedom and on the soul of humanity. For, there is another war, a war within the war, an insidious war that came before the invasion began and that will continue after the current battles are over.

As millions seek safety from the mindless destruction of towns and cities, Putin is persecuting other people and prosecuting another war. The war within the war is being waged inside Russian territory and inside the minds and hearts of the Russian people. The warfare undertaken before the invasion involved a massive effort to indoctrinate an entire nation and set them against the world.

The shocking military assault could not have begun unless the blitzkrieg against truth had penetrated the psyches of a majority of the Russian population. In the parallel universe where many Russians now reside, Putin's propaganda machine grinds night and day to convince the Russian people that Ukraine and NATO provoked the invasion, that his “special military operation” is actually a liberation campaign to purge Ukraine of Nazis. Truth has always been the first casualty in a war; now wars against truth are waged long before any battles begin.

As safety has become ever harder to find throughout Ukraine, truth has become ever more scarce inside Russia. Recently, Putin issued a draconian law that criminalizes any speech that contradicts the official Kremlin line which insists that the deadly offensive against Ukraine is not a war at all. Merely referring to it as a war can put a person in prison for 15 years, making them a casualty of the war on truth.

Putin’s state has become a testament to how authoritarian leaders can stage manage false narratives and big lies as the first stage in wars against humanity. Many Ukrainians recount stories of their older relatives in Russia expressing profound disbelief about the war; saying that there is no shelling of Kyiv and that Russian forces are only in Ukraine to help people. The campaign against truth does not spare innocent children either, as those in grade schools receive sessions reinforcing the official government line that the war is not a war, but a special operation intended to save lives.

Researchers say that those creating propaganda in Russia understand the grievances and the tendencies of their audience. They know how to make their stories dramatic, but also entertaining. The sad truth that they do embrace is that when people see the same false message repeatedly, it becomes easier and easier to believe it.

Being alive at this time, we all suffer a cascade of crises that weigh heavily on our souls. The climate crisis affects the entire planet, the Covid pandemic affects everyone to some degree and the many crises of social injustice affect all of humanity at this time. Yet, the root of our troubles can be seen in the crisis of truth and meaning which can both obscure as well as deepen all other crises. In the war on Ukraine we can see the crisis of truth and meaning being coldly converted into rockets and bombs and methods of destruction that must chill the heart of humanity.

Some people talk about a post-truth world as if the repetition of big lies and misinformation can erase the longing for truth and meaning that has been an essential part of humanity from the very beginning. The core ideals of humanity are intended to serve as a light to follow, especially when the dark times come round and we become more exposed to the extremes of life and to the winds of despair. And, we are the current inheritors of the deep human longings for truth, for beauty and for the life sustaining capacity to truly transform.

An old idea states that nothing but truth can hold the truth. In other words, we can only hold to ideals like truth, beauty and justice, if we find ways to embody the truth of our own lives. Finding antidotes to the epidemic of falsity, to the onslaught of misinformation, and the weaponizing of big lies, means being willing to be open to radical changes in our lives while finding ways to live in truth.

Listen to the Podcast