The True Mirror – A Reflection of our True Nature

This article was first published in October of 2014 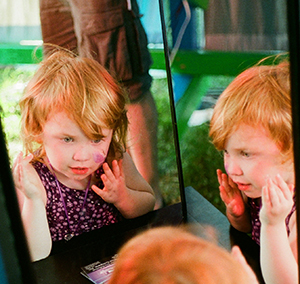 Most people know that they are backwards, reversing left and right sides, but never thought it mattered much. But many years ago, John Walter discovered something very interesting, even profound, about backwards mirrors—he realized that his backwards face was flat, unanimated, fake and highly critical. This came to him as a Eureka! moment because he saw himself by accident in a true reflection mirror, or True Mirror, when the medicine cabinet mirror joined at 90 degrees to the backwards bathroom mirror in front of him.

What he discovered was that beforehand, when he saw his big smile in the backwards mirror, the mirror image person just shot him down with an overwhelmingly critical judgment that his smile was fake, that there was something wrong with him, and that he must have been fooling all the people he was with. He believed what he saw in mirrors because as we all know, seeing is believing. This wasn’t the first time the mirror had given him such criticism, but it was very strong and very much at odds with how he thought he was doing beforehand.

He then turned sadly away from that mirror, but suddenly did a double take – he saw his true reflection in the medicine cabinet/mirror combination. What made him stop and look back was something amazing; the smile that had disappeared from his lips had not quite disappeared from his eyes. When we all have genuine smiles, there’s light in our eyes. It’s light with meaning, and in this case, the meaning was that he was happy, very happy, actually. “There you are!” he remembers saying to himself, followed by “There’s nothing wrong with you—you’re fine!” Since what he was seeing matched what was real, it was easy to smile back. In fact he started beaming at himself and his smile didn’t go away (they had to bang on the door to get him out of there!).

That moment—truly a Eureka! moment—has been followed by years of perfecting the optics (which are very difficult to get right), producing them as seamless True Mirrors, showing it to tens of thousands of people, and figuring out the science behind a true reflection. Why should it be so different? What is the value, both short and long term, and also what would it be like to have it during our formative years? Why do some people see it right away and others see no difference? Why do some like it immediately, and others run away screaming?

The idea itself isn’t new. John Walter calls himself an artist and “re-inventor” of the True Mirror. It is simple physics, there is even a mention of such a device in a Greek text around 40AD, and a Catholic priest patented the idea in 1887. But in all that time, it was just a physical invention, not a tool to seeing ourselves personally. One reason is that back then they didn’t even have concepts such as “personality”, “left brain/right brain”, “interactive continuity”, “feedback loops”, “early childhood development”, etc., all of which help describe what is going on in the True Mirror, and for why we can see it’s value now.

The science of the True Mirror
We use our faces a lot to communicate our thoughts and emotions, both projecting and reading that information very accurately. However, the information that we read on faces is very sided – left looks and feels differently than right. Overgeneralizing, and with apologies to the current research, the shorthand is that the left side is logic, the right side is feeling. While not exact, it’s a good measure of what we see in faces. When you flip your face in a mirror, you will still try to read your face using the same map as with everyone else, but the information isn’t correct. We look for logic on the left side, but in the mirror it’s on the right, and vice versa. Since we are still interacting, and the information doesn’t match, it causes our expressions to fade. Smiles in particular look rather fake with the flipped information, and one usually doesn’t respond to fake smiles very well. It is a feedback loop with distortion. There’s a pretty simple experiment you can do to prove this – click here for an example using Bruce Willis’ smile.

In contrast, when you make eye contact with yourself in a True Mirror, the information in your face matches what you are seeing, and as a result, your expression will read correctly and your response can be similar to the way others respond to you. Your face “works” because you still are in that incredibly dynamic feedback loop, but now without distortion. Smiles can be amazing – everyone has genuine smiles, with light and life in our eyes that match for why we are smiling. Not everyone sees it, mainly because we are conditioned to stare at ourselves almost immediately when we make eye contact with ourselves. Probably long ago when we were around 10, we decided unconsciously that expressions look off and just stopped doing them. Staring doesn’t necessarily look that different backwards and forwards. It turns out that you have to be yourself to see yourself.

The other reason it hasn’t been seen as anything more than a physical device is that only certain personality types will see the effect and get the concept. Usually people who are more animated naturally (i.e. vivacious), visually oriented, artistically inclined, or with higher self-awareness will see it right away. In general populations, it’s roughly 10% will get it right away and be amazed, another 10% will be intrigued and sort of see it, 30% see no difference, and 50% are highly disconcerted by what they see and don’t like it at all!

John Walter has been making and distributing these mirrors for 22 years, and in that time has proven the concept to himself and thousands of people. For him, it never gets old to show people how amazing they actually are, with life and light in their eyes. At the upcoming SAND 2014 conference, he will have a True Mirror available for viewing in one of the public areas. He welcomes people to look for him to give the “cook’s tour” of the experience. There is sometimes coaching required for people to see themselves animated versus just staring.

There is a connection the Entanglement of Life, for we can, as dynamic, living, communicating beings finally connect and stay present with ourselves. The question is, what will that engender for our future understanding of our own consciousness and development?