The Linguistic Demon of Space-Time

Time and space are one of the greatest conundrums of both science and philosophy, and have been so since we began to think about them self-reflectively. Many, especially in physics, see space-time as an objective thing, which can be bent and twisted. Others, namely in Eastern philosophy, see time and space as illusions, narratives in the mind without any objective existence. An intense dialectic goes on between these two apparently opposing views.

But when it comes to explaining and communicating these views, the playing field is anything but level. Those who espouse the notion that time and space are just illusory narratives face the apparently impossible challenge of articulating their position in language. After all, language already has time and space built right into it: we conjugate verbs according to tenses that reflect time; the linguistic separation between subject and object assumes the objective existence of space; grammar organizes the structure of language along the axes of time and space; and so on. Language assumes and reflects the notion of objective time and space in its very structure. So anyone trying to explain reality from outside time and space is immediately at a huge disadvantage the very moment they use language. How can they articulate their position then? How can they defend themselves coherently against the linguistic onslaught of the objectivists? How can they argue their case?

Because of this, Eastern philosophers have insisted that the only way to understand the illusory nature of time and space is through direct realization, not explanations. Explanations are linguistic and, as such, already assume time and space to begin with. As a result, our cultural narrative has been completely dominated by the notion that time and space really do exist objectively. After all, cultural narratives are the offspring of language; they fundamentally depend on our ability to communicate linguistically. Moreover, the direct realization of the illusory nature of time and space is extremely elusive. We are all immersed in a culture that denies and ridicules it. The result is a self-reinforcing ethos—a ‘demon’ of sorts—that imprisons the vast majority of us in the finality of objective time and the confinement of objective space. We are—or so the demon screams—limited beings lost in the vastness of the cosmos, destined to oblivion at the moment of death. We’ve been eaten by the demon and completely lost touch with our own inherent transcendence. It is critical to realize this: it is the demon of objective space-time that robs us of our felt sense of transcendence and creates all suffering.

The only way to fight back against the demon is to coherently talk about the nature of reality from outside time and space. But how to do this? How to use language to deny that which is built into language? How to use words and grammar to make sense of reality without tenses or distinction between subject and object? How to understand our felt sense of a personal past, as well as our inability to identify with the universe at large, simply by reading something, instead of having to attain enlightenment ourselves?

Notice that, up until my book Brief Peeks Beyond, my own work has indirectly granted validity to time and space. I’ve used metaphors such as swirling whirlpools in a stream, which assume space (the extension of the stream) and time (the interval along which the whirlpool can dynamically swirl). We think in terms of time and space, so my work up to that moment has simply acquiesced to this reality. My approach has been to pick my fights carefully: I’ve focused on debunking the contemporary notion that there is objective matter ‘out there,’ outside subjective experience. But in doing so I’ve left the beast of objective space-time untouched. 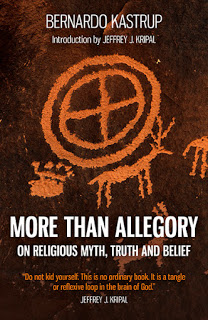 In Parts II and III of my new book More Than Allegory, however, I finally bite this bullet. There, for the first—and perhaps last—time, I attempt to coherently make sense of life and reality in a way that does not assume the objective existence of either time or space. I attempt to explain everything—the unfathomable variety and structure of existence—without extending it along the axes of time or space, but by squeezing all the patterns of existence into the singularity of the now. To do this, I introduce the key notion of what I call the ‘cognitive big bang.’ From the book:
The present moment is the cosmic egg described in so many religious myths, which we briefly discussed in Part I. It is a singularity that births all existence into form. It seeds our mind with fleeting consensus images that we then blow up into the voluminous bulk of projected past and future. These projections are like a cognitive ‘big bang’ unfolding in our mind. They stretch out the intangibility of the singularity into the substantiality of events in time. But unlike the theoretical Big Bang of current physics, the cognitive ‘big bang’ isn’t an isolated occurrence in a far distant past. It happens now; now; now. It only ever happens now. (pp. 102-103)
Indeed, the ‘cognitive big bang’ replaces space-time as an explanatory framework for the undeniable variety and structure of our experiences. It allows reality to be made sense of in language in a way that still rejects objective space-time. It carries the potential to kill—or at least fatally wound—the demon. The attempt is somewhat precarious, since language, by its very nature, constantly tries to seduce the reader into thinking in terms of space and time at every twist and turn of the text. But I believe it can nonetheless be successful, if only you read the words with attention and self-discipline. I do believe there is a way to realize the illusory nature of time and space simply by reading a coherently written piece of text, without having to achieve what in the East has been called ‘enlightenment.’ This has been my attempt in Parts II and III of the book. And if you succeed, you will realize that…
The past is always gone and the future never comes. There is only ever the present. Have you ever left the present in your entire life? Even if you had a time machine to visit the ‘future,’ during your visit the ‘future’ would be your present. You cannot escape the present; ever; not even theoretically.
Past and future exist only as mental explanations and predictions, images in the mind. But these images are experienced in the present. Pause and consider this. There has never been a single moment in your entire life in which the past or the future existed as anything other than images experienced in the present. Any other conclusion is simply the subjective output of an intellectual model of reality—no matter how plausible—not a mind-independent fact.
Forever locked in the now, we subjectively project a past backwards and a future forwards. ... But even those projections exist only insofar as they are experienced in the present. Past and future, at bottom, are simply particular qualities or configurations of certain present experiences: the past corresponds to the qualities of remoteness and finality, while the future corresponds to fuzziness and openness. It is our intellect that mistakes these different qualities of present experience for an objective timeline extending back and forth. Past and future are merely concepts arising from cognitive confusion. (pp. 99-100)