The Anatomy Of God: The Source 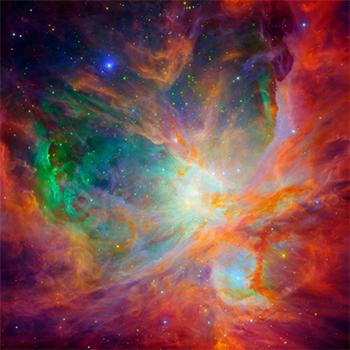 “The search for the ‘one’, for the ultimate source of all understanding, has doubtless played a similar role in the origin of both religion and science.”
~ Werner Heisenberg (1901-1976), Nobel Prize winner for physics
As a teenager, I first began engaging intellectually with the world with the philosophy sections of bookstores and libraries, avidly inspecting books for pearls of wisdom. If a philosopher dared to mention spirituality or God, I would consider the book misplaced and not relevant to my philosophical questions. I was, for some time, an avid atheist, embracing the modern scientific and philosophical trend that has become quite pervasive.

My how things change.

I have realized in my own personal journey that examinations of God and spirituality are part and parcel of philosophy, if we define philosophy as the broad endeavor to understand the universe and our place in it. There are many functions of philosophy, to be sure, but this is as good a definition of philosophy as I have found.

No Need For A God Hypothesis In The Eyes Of Materialist Science
Any rational inquiry into the nature of the universe and our place in it—which includes science as a more specialized form of philosophy—must face one of the most basic questions: how does complexity arise? It seems that it must arise from simplicity. At the very least this is the phenomenon we see all around us: simpler constituents generating more complex forms through combination, separation, and emergence. What place should God have in this story of simplicity producing complexity? Can’t we explain the universe in terms of merely matter, energy and space? In a word, no.

The modern scientific and philosophical trend has generally been to whittle away God’s role in the world. Modern science, with Galileo, Newton, Descartes, etc., began this trend by defining the scientific pursuit as rational inquiry into God’s work. This inquiry was, and is, all about discovering the rules that govern the world.
The broadest hypothesis of modern science and of the modern era more generally was that the world is regular and rational, i.e., it operates through discernible rules. This hypothesis has generally been borne out, as evidenced by the marvels of technology all around us. By discovering the rules that govern the world, many early philosophers and scientists supposed, we explain the handiwork of God and perhaps even the mind of God.

Over time, this hypothesis became stronger and in the 19th Century many scientists and philosophers became overtly atheistic. Rather than viewing the universe as the handiwork of God, many came to view the universe as inherently without design and without a creator. We may never know what caused the universe to come to be, it was thought, but we certainly could explain everything worth explaining without invoking God. Laplace, an early 19th Century French materialist scientist and philosopher stated, when asked by Napoleon what place God had in his system: “I had no need for that hypothesis.”

Nietzsche crowned this trend in the 19th Century with his pronouncement that “God is dead.” Even though large majorities of Americans today proclaim belief in God in some manner, the general view among the cultural elite of scientists and philosophers is that God is indeed dead and that the universe can be explained entirely through various permutations of mindless matter, which combine in complex forms like humans to produce very complex minds.

The problems with this view, known generally as scientific materialism or materialist reductionism, are fleshed out in my book, Eco, Ego, Eros, which attempted to show how modern science went astray by intentionally or unintentionally excluding mind from its explanations in many different fields.

A Shifted Perspective: Does All Matter Have Mind?
My intellectual journey took a sharp turn when I began thinking seriously about the nature of mind. I began reading in this area in my late teens and have continued to this day, over twenty years now. When I realized what I consider to be the fatal problems in the materialist worldview with respect to explaining the nature of mind and matter, I also realized that a far better explanation is found in the view that all matter has some degree of mind attached.

Where there is matter there is mind and where there is mind there is matter. It’s all a matter of degree, of complexity. In most cases, matter and mind are extremely rudimentary, but as matter complexifies, so mind complexifies (generally). This view is known as panpsychism or panexperientialism and it turned out that this philosophical position is also a universal acid for resolving all manner of philosophical and scientific problems, and spiritual problems.

This is a key step in my argument in this essay, so the interested reader should, if not already convinced of the problems facing the materialist view of the world, and its “emergence” theory of mind, review parts I through IV of my series on absent-minded science.

I realized, in reading through the works of Alfred North Whitehead and David Ray Griffin, two well-known panpsychists, that the process that leads to our complex mind is unlikely to stop at our level of complexity. There may be, and probably are, many levels of complexity higher than our level. It’s a matter of scale, as Whitehead and Griffin themselves discuss. This knowledge leads to some interesting possibilities when we consider spatial and temporal scales far beyond the human level.

Source & Summit
A major problem with traditional notions of God in the western tradition is that He (she, it) is invariably presented as already extremely complex, perhaps the most complex (and powerful) entity that exists. This puts the cart before the horse if God is not simply to be accepted as complex from the outset and thus to be considered outside of any rational inquiry. There are many areas of human inquiry where rationality must at least in part bow to intuition and faith; spirituality is certainly one of those areas, but this is not an all or nothing kind of thing. Rationality may certainly shed some light on these issues even if intuition and faith also play a role.

It seems that God, in a rational approach to spirituality, must be explained in an evolutionary manner. In other words, how did God become complex? It seems clear that any kind of conscious God worthy of the name is necessarily highly complex. We need to be clear, however, in what we mean by “God.” Does God have to be conscious?

David Ray Griffin writes about “twin ultimates,” Ken Wilber about “Source and Summit.” That is, there are two types of divinity: the ground (Source) and the sky (Summit). Another apt metaphor, perhaps even more apt than the metaphysical ground is an “ocean of being.” In this ocean of being metaphor what each of us experiences as manifest reality, including ourselves and all other physical things, is represented by the waves on that infinitely deep ocean. The deeper we go in that ocean the closer we come to pure being, devoid of any distinctions at all.

The Source and Summit enclose all of reality and we exist at some middle level of reality. Where exactly we exist, we’ll never know because even if we succeed in scaling any particular summit we can never know if there are not higher summits beyond.

The Source is, in my view, more fundamental than the Summit and is probably not conscious; that is, there is no subjective awareness in Source. The Source is the ground of being, the soil from which all things grow or the ocean from which all waves/particles manifest (pick your preferred metaphor). The Source is far simpler than notions of God as a complex being (“God as Summit” in the framework I’m sketching here). There are many lines of reasoning that seem to require some kind of ground, a foundation for the universe. Here are a few:

Explaining Complexity
In approaching the ground/Source from an evolutionary perspective we are, then, still confronted with explaining complexity from simplicity. The ground must have some degree of complexity built in if it can produce all the marvels of our universe, what can be labeled in this case “primordial complexity.” Given this degree of complexity, is the Source, the ground of being, simply to be accepted with no further explanation? It seems that the answer is yes.

While the ground’s primordial complexity cannot be denied, we can console ourselves that the ground is as simple as possible, but no simpler. That is, to have the universe we know from direct experience we must accept some degree of primordial complexity. We don’t, however, have to accept the kind of complexity evident in Western notions of God, but we must accept some type of complexity “built in” from the beginning if we accept the ground of being as a necessary part of our ontology. We have a universe and some things in that universe are simply brute facts that cannot be further explained.

Even if we accept the ground of being as without beginning and without end (presumably), we can never rule out the possibility that the ground itself evolves. We can never say that it didn’t start simple and become complex over the eons. We may in fact gain new insights in coming decades or centuries with respect to the origin of this realm beneath our feet, but for now it seems fair to state that we must at least accept the brute fact of its existence.

The ground of being has many names. In modern physics, it is the “quantum vacuum” or just the vacuum, representing pure potentiality; to Anaximander, an influential pre-Socratic philosopher it was apeiron; to Plato and Plotinus it was the One; to ancient Hindu philosophers and mystics it was Brahman; to some schools of Buddhist thought it was Adibuddha or Emptiness; to Jewish Kabbalah it was Ein Sof; for Hegel and other Idealists it was the Absolute; for Jung it was the unus mundus. And in Christian philosophy the ground of being is either the ground of being (Tillich) or agennetos (Origen). Whatever name we prefer they all refer to the same concept: the ground from which all else grows. And this is as good a definition of God as any.

Part II of this series will focus on the Summit, the other “twin ultimate,” and key distinctions between Source and Summit.

This article is written by Tam Hunt and is originally published on www.collective-evolution.com