In the Morning I Remember 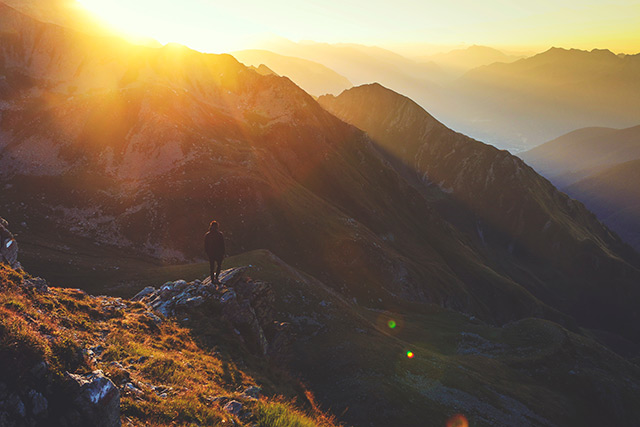 Here is a beautiful prayer composed by Adi Shankara around the 8th century. These three verses, meant to be recited in the early morning, are a beautiful and touching summary of the heart of Advaita. I have chosen here a simple version, devoid of the Sanskrit terms.

At dawn, I meditate in my heart on the truth of the radiant inner Self.
This true Self is Pure Being, Awareness, and Joy, the transcendent goal of the great sages.
The eternal witness of the waking, dream and deep sleep states.
I am more than my body, mind and emotions, I am that undivided Spirit.

At dawn, I worship the true Self that is beyond the reach of mind and speech,
By whose grace, speech is even made possible,
This Self is described in the scriptures as “Not this, Not this”.
It is called the God of the Gods, It is unborn, undying, one with the All.

At dawn, I salute the true Self that is beyond all darkness, brilliant as the sun,
The infinite, eternal reality, the highest.
On whom this whole universe of infinite forms is superimposed.
It is like a snake on a rope. The snake seems so real, but when you pick it up, it’s just a rope.
This world is ever-changing, fleeting, but this eternal Light is real and everlasting.

Who recites in the early morning these three sacred Slokas,
which are the ornaments of the three worlds,
obtains the Supreme Abode.

Vimala Thakar wrote a beautiful translation and commentary on these lines, starting eloquently:

“In the morning as I meet the dawn, I remember that my heart contains the God, the Beloved, who has not yet been defined and described. I remember that it is He who vibrates within my heart, enables me to breathe, to talk, to listen, to move.”

Sanskrit language has infinite subtleties that don’t always appear, even in the best translations. Here, Vimala gives the beautiful analogy of the swan present in the original language:

“I arrive at a state of being that has been called by the ancient wise Indians “Paramahansa”, a swan that swims through the waters of duality.”

Further down, she exposes the impossibility for the mind to attain the reality of Presence by these beautiful lines:

“On the frontiers of the mind I give the mind a job to explore that which lies beyond its own frontiers, that which is not accessible to the word, to the speech, as well as to the mind.”

“I ask the mind to travel back, through the word, to the source of the word, the sound, and find out how the sound is born.”

She then exemplifies the famous vedantic analogy of the serpent and the rope, and ends up with a perfect conclusion:

“I had mistaken the rope of duality for the snake and cobra of misery and sorrow. But the light dispels the darkness and I see that the duality is only a rope that cannot bind me in any way unless I bind myself with it.”

“The perfect eternity. The God divine. That is really my nature. I had mistaken the tensions of duality to be me, but then the light dispels all the darkness, and I get rooted back into the ‘ajam’, the ‘aychuta’ – that which can never be swept off its feet. Ajam – that which was never born, and can never die. I am that.”

– The prayer by Adi Shankara comes from Aghori.it.
– Here is the full commentary from Vimala Thakar.

Bibliography:
– ‘The Crest-Jewel of Wisdom’ – by Shankaracharya / Translated by Charles Johnston – (The Freedom Religion Press)
– ‘Blossoms of Friendship’ – by Vimala Thakar – (Rodmell Press)

This article was created by Alain Joly and reprinted by permission from https://thedawnwithin.com.