God is a Mathematician 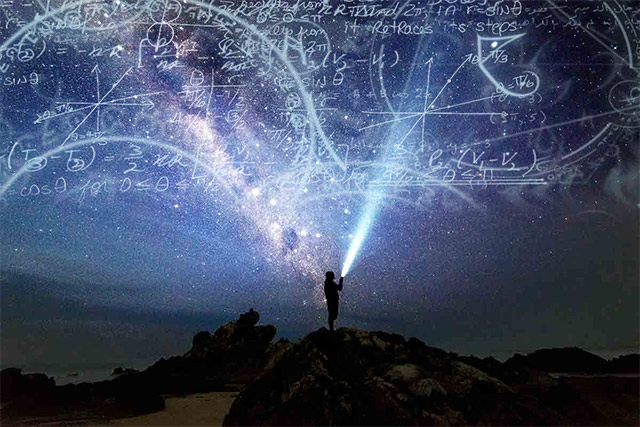 Mathematics is abstract, symbolic, structured and precise. It is true everywhere and always and mathematical laws cannot be violated, ever. Math sounds a lot like the attributes of God—eternal, omnipresent and omnipotent. According to theoretical physicist Michio Koku, “The mind of God we believe is cosmic music, the music of strings resonating through 11-dimensional hyperspace. That is the mind of God.“i Vern Poythress, who teaches New Testament in Cambridge University and has two doctorates, a PhD in mathematics from Harvard and a doctorate in Divinity, argues in his book Redeeming Mathematics: A God Centered Approachii, that “the harmony of abstract mathematics, the physical world of things and our thinking depends on the existence of a Christian God.” Srinivas Ramanujan, on whose life the book and the movie “The Man who knew Infinity”iii are based is known to have said that “an equation to me has no meaning unless it represents a thought of God”.

The structures of the universe, from the tiniest (subatomic) to the largest (cosmic), can be visualized as networks or webs of connections. And, these networks are interlocking, pulsating particles, exchanging, sharing and transforming energy from one form to another. Physics today is understood through mathematics. Scientists have long used mathematics to describe the physical properties of the universe, but physicist Max Tegmarkiv goes even further and believes that the universe itself is math. In Tegmark’s view, everything in the universe — humans included — is part of a mathematical structure. All matter is made up of particles, which have properties such as charge and spin, but these properties are purely mathematical, he says. And space itself has properties such as dimensions, but is still ultimately a mathematical structure.

Mathematics, numbers, symbols, information and energy are different ways by which physicists have attempted to describe the universe. Modern theories in physics are abstract and mystifying to most. For many, faith in the divine origin of the universe provides more certitude than modern physics does. Faith gives one certainty which physics is unable to do, this is the appeal of faith for many. Certainty in an uncertain world is comforting.

Scientific knowledge has an asymptotic relationship to truth or Truth. Scientists are getting closer to the Truth but, I suspect, will never reach it. Scientists are like Adam reaching out to touch the hand of God but not making it, as depicted in the frescov on the ceiling of the Sistine Chapel.

Physicists are peering into the outer reaches of the cosmos and probing deep into the inner sanctum of atoms, discovering realms that are beyond the reach of our senses. For most of us, these realms are difficult to comprehend, because we cannot see, touch or feel them. No one has seen a quark or been able to visualize Einstein’s four-dimensional space and time. Hence, to some, modern physics is incomprehensible, abstract, hard to relate to, and indistinguishable from a myth.

Thankfully, we do not rely just on our senses to understand the universe, if we did, we would still be in the dark ages.

Physicists are looking for a single theory or, as Michio Koku states, “an equation about six inches long,” which can explain all phenomenon, from the largest (cosmos) to the tiniest (subatomic particles). The holy grail in physics is to find a theory that reconciles general relativity and quantum physics. Science is in search of ultimate unity, the God Particlevi, as Nobel Laureate Leon Lederman wrote in his book of the same name. Particle physicists keep building bigger and bigger particle accelerators, like the one at CERNvii, in search of the God particle. At CERN, in the Large Hadron Collider, energy at the point of collision of the protons approaches the energy moments after the Big Bang, in the hope of finding the God particle.

The truth is that the Truth might not be a particle. Truth might not be a thing. It might be an abstraction, like an “idea in the mind of God”, as some have suggested, or perhaps as Max Tegmark posits, “There’s something very mathematical about our Universe, and the more carefully we look, the more math we seem to find. ….. So, the bottom line is that if you believe in an external reality independent of humans, then you must also believe that our physical reality is a mathematical structure. Everything in our world is purely mathematical – including you.”

Theologists, scientists and philosophers seem to agree that Reality, absolute truth, or God, if you will, is an abstract reality. Not a reality that can be detected by our senses or known through our intellect. In this view mathematics are an expression of the mind of God. She is a mathematician!

Further proof is in sacred geometries found in nature.