And God Created Man In His Own Image 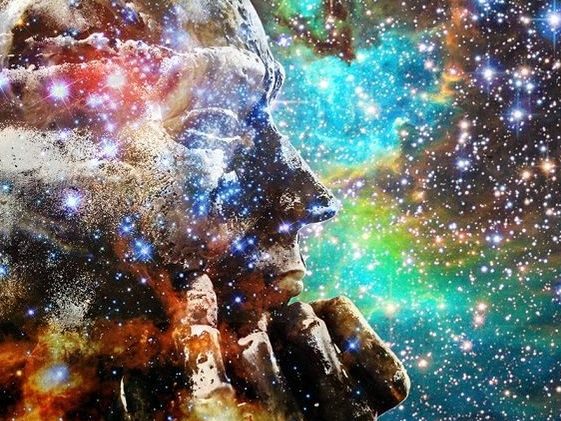 Apparently philosophers and theologians have been debating the meaning of this phrase for millennia. And at best the ambiguity of it has led to the assumption that God is similar in appearance to the physical forms of man and woman. But at worst it is taken to be saying that man is above woman, since it says God created man in his own image - and not woman.

And it is perhaps unfortunate that this phrase causes so much confusion, since it’s actually remarkably simple to understand, if we take the nondual perspective together with the teachings of other religions and established authorities, not to mention one’s own experiences - should you have had your own spiritual insights and realizations into the nature of this place.

We have the Eastern term maya, often translated simply as illusion; and we know “everything is one” (or more precisely “not two” - hence the term nonduality). And we also have many teachers and teachings, past and present, describing this place as a dream or projection.

Then we look at the Hebrew text, which has ultimately led to our translated and modernized version. The word for image was originally tselem (apparently, as I don’t speak Hebrew), meaning literally a shadow which is the outline or representation of the original (source: www.ancient-hebrew.org).

Suddenly a picture is beginning to form as to what is being pointed at. And indeed the word picture is appropriate since that’s exactly what this is: maya, illusion, dream, projection, shadow, representation - or even image. But no-one is speaking of or describing God creating man (and/or woman) to physically look like Him (or Her), since we know (don’t we?) that God is one of many names we give to the essence or being behind it all, behind all images and forms, and S/He has none. And what is more, it is this that one eventually realizes as oneself! The formless; the infinite.

So, we have established that the word image in the phrase “God created man in his own image” is referring to this physical manifestation in which all forms appear. And it is therefore just as accurate to say (as I look out of the window from where I sit writing), “God made the shopping carts in his own image,” or the trees, the roads and buildings - and indeed anything and everything that occurs.

Likewise, we have the expressions often shared in discussions of nonduality: “Everything is consciousness,” “Everything is self” and “There is only this,” and slowly it all begins to tie together…

God is not, and has never been, an old man with a beard looking down on the world and passing judgment. This is God’s image - what you are experiencing this moment, every moment, your body and your entire physical surroundings. And where is this God? S/He/It is what is looking out of your eyes at this very moment. There is no other. (Hence we talk about realizing one’s true self as God.)

It has also been said that this is a dream. Whose dream? Well who else is there? This is nonduality, everything is one. You know this. And God is right now looking out of those eyes there onto His/Her/the dream of creation in which all occurs. And, as with any dream, it’s created by the need to experience something. And this need or attachment within one’s own unconscious is projected and forms the imagery which the conscious mind experiences. “Everything is self” - but not another self, not someone else’s self, but me, the one reading this.

The phrase “God created man[kind] in his own image” is only referring to this dream of creation in which God, or whatever term you prefer to use, has long since forgotten and lost Herself/Himself. S/He struggles to get through each day, arguing and loving, hoping and regretting, longing for some respite and lasting comfort from this mad place. All the time not knowing that S/He is the only one here, the one self behind it all, lost in, or as, Its own consciousness. In Its own image.