This article was originally published Feb 10, 2015 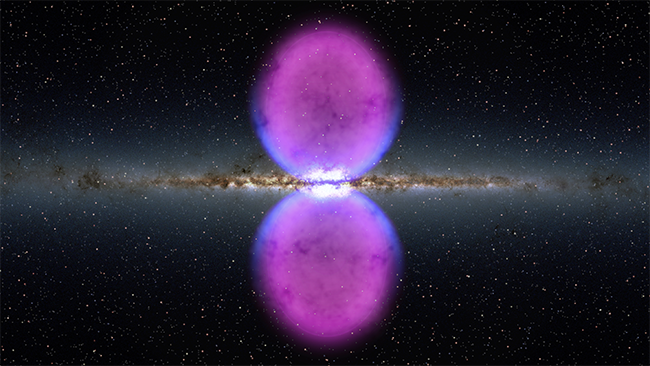 According to Ervin Laszlo, the coherence of the atom and the galaxies is the same coherence that keeps living cells together, cooperating to form life. When a complex system made up of many interacting parts is operating, sometimes an unexpected jump to a new level of complex organization happens. Our human body is made up of many such levels, each formed by another jump in complexity. Our lowest level of the cell jumps up a level to body tissue, to body organ, to body system and to the whole body. We are therefore formed with many onion skin like levels that all cooperate in complex ways to make one whole human being. It is really amazing how it all fits together.

At the same time, in the human realm of consciousness, we are - as far as we know - the only creatures able to contemplate who we are, why we are here and how we fit into the universe. We can even contemplate on the fact that we can contemplate about who we are and how we fit into the universe. This coherence also allows evolution to happen and that has enabled us to evolve from a microscopic bacterium right through to the complex beings that we are with all our mental, physical, emotional and spiritual capabilities.

Ervin Laszlo presents a theory that helps to tie both together. He proposes that the quantum vacuum - which we know contains all the information of our history from the Big Bang to now - is also consciousness. Everything in the universe therefore has consciousness; from a pebble to a tree, to a cloud, to a person. While this goes against the view of mainstream science, there are some highly respected scientists such as Freeman Dyson, David Bohm and Fritjof Capra, who support the idea that the universe is in fact conscious. Ervin Laszlo says that life happens because it comes from the quantum vacuum.

We are conscious of our existence and have evolved a brain able to access and use the consciousness held in quantum vacuum. Consciousness is yet another manifestation of coherence allowing a mass of nerve cells to co-operate and form a unified sense of self.

Ervin Laszlo equates this quantum vacuum with the Akashic Field of ancient Hindu spiritual tradition. The Hindu say the Akashic record is a field from which all the universe is formed and which holds all that ever was, is or will be. The Hindu also say that the Big Bang that started the universe, and the big crunch that will happen when the universe goes into reverse and collapses back into itself, is only a part of many cycles of universes, just like ours, appearing and disappearing, just like the subatomic particles in our world.

Ervin Laszlo states that information can be transferred from one cycle to the next, which explains how the precise numbers for gravity, electromagnetism etc. come to be so exact when there has not been enough time for these to have formed randomly. Those numbers are transferred from previous universes.

The Akashic Field, being the background to the subatomic worlds, also flows through the other realms of stars, galaxies and human life, and is an activating force in all those realms. It is the force moving the stars and galaxies and the spark that gives life to bunches of molecules, driving the power of evolution and giving us the ability to develop our consciousness and experience the unity of the universe.

Ervin Laszlo’s theory says we are therefore linked to all people who have ever lived, and we can get access to them by accessing the Akashic field. This can explain life after death, because the past has never gone away, telling us that the past is ever present in everything we do. It clearly points to a universe where all is one and everything is linked. And if we tune ourselves into the Akashic field, we can access abilities that appear to be supernatural, but are in fact completely natural. Activities such as meditation can help us plug into the Akashic field and become much more than we are at present. Science and spirituality do not need to be set against each other as we have tended to think for so long.

Ervin Laszlo links the world of science with spiritual traditions, presenting it in a seemingly clear and logical way, incorporating all the latest research in so many fields of scientific research and tying it all together into a wonderful cohesive theory that makes sense of so many strange and contradictory parts of the universe. It explains what is usually called the supernatural in natural terms, giving strong evidence for the truth of such things as clairvoyance, reincarnation and spiritual healing.

Information
In the universe, states Ervin Laszlo, information is entirely basic. In the latest conception the universe doesn’t consist of matter and space, it consists of energy and information. Energy exists in the form of wave-patterns and wave-propagations in the quantum vacuum that fills space; in its various forms, energy is the “hardware” of the universe. The software is information. The universe is not an assemblage of bits of inert matter moving passively in empty space, it is a dynamic and coherent whole. The energy that constitutes its hardware is always and everywhere in-formed. It is in-formed by what David Bohm called the implicate order and what physicists now regard as the quantum vacuum or zero-point field (also called physical spacetime, universal field, or nuether). This is the in-formation that structures the physical world, the information we grasp as the laws of nature. Without information the energy waves and patterns of the universe would be as random and unstructured as the behavior of a computer without its software. But the universe is not random and unstructured; it is precisely in-formed. Would it be any less precisely informed, complex systems could not have emerged in it, and we would not be here to ask how this on first sight highly improbable development could have come about.

The answer science has to the ‘what’ question refers to an entangled, holographic, non-local connecting in-formation field in the cosmos. In his books - in greatest detail in Science and the Akashic Field - he discusses the evidence for this field and notes that the Hindu seers referred to it as Akasha, the fundamental element of the cosmos. In recognition of this feat of insight, he is calling the information field of the universe the Akashic Field.

But how does the scientific answer to the question regarding the fundamental significance of the spiritual experience relates to the answer given by religion?

For the world’s religions, the larger and deeper reality to which the spiritual experience connects us is a numinous, divine reality. It is either a spirit or consciousness that infuses the natural world (the immanentist view), or a spirit or consciousness that is above and beyond it (the transcendentalist claim). Traditional polytheistic religions leaned toward the former, while the Abrahamic monotheistic religions (with some exceptions) embraced the latter.

The difference between a divine intelligence immanent in the world and one that transcends it is not negligible, but it is still just a difference in interpretation. The raw data for both positions is the same: it is the spiritual experience, a quantum communion with universal oneness. In the Western religious perspective this is communion with the spirit that infuses the cosmos, identified as God. Deepak Chopra writes, “Spirituality is the experience of that domain of awareness where we experience our universality. This domain of awareness is a core consciousness that is beyond our mind, intellect, and ego. In religious traditions this core consciousness is referred to as the soul which is part of a collective soul or collective consciousness, which in turn is part of a more universal domain of consciousness referred to in religions as God.”

Our experience of the core consciousness of the world is ultimately an experience of the universal domain of consciousness Western religions call God. The experience itself, if not its interpretation, is the same in all religions, and in all religions it inspires a sense of oneness and belonging. Michael Beckwith affirms that “when you strip away the culture, history, and dogma of every religion, the teachers of those religions were teaching very similar principles and practices that led to a sense of oneness, that ended a sense of separation from the Whole.”

Science’s answer to the question of what the spiritual experience connects us to is immanentist. The information that underlies the universe, the Akashic Field, is part of the universe. This doesn’t mean that the immanentist position necessarily states the ultimate truth; it only means that science can only take an immanentist position. Scientists are limited to speaking about the natural world; they must leave speculation about transcendent realities to poets, philosophers, and spiritual masters.

It’s time to conclude. If the substance of the spiritual experience is always and everywhere the same, differences in its expression and interpretation are secondary and not a valid cause for conflict and intolerance. The world to which our quantum brain connects us is fundamentally one, whether its oneness is due to an information field within the natural world or the work of a divine transcendent intelligence. To enter into communion with this oneness has been the quest of all the great teachers and spiritual masters. And to understand the nature of this oneness has been, and is, the ultimate quest of all great scientists. Still today, physicists seek the one equation that would anchor their famous “Theory of Everything,” the theory that would account for all the laws of nature and explain everything that ever happened in our integrally whole universe. Einstein said that knowing this equation would be reading the mind of God.