Postactivism: The World is Alive and that Changes Everything

Recordings of the webinar sessions can be found in the MODULES tab.

As Category 5 hurricanes flail and thrash against anxious shorelines, and as heatwaves send thermometers across the planet to their screaming extremes, the story of impending civilizational demise grows stronger. In the cloud of dust unsettled, among the ruins, we are discovering ourselves and our planet as if for the first time.

Unpredictable weather patterns, dying ecosystems, deep uncertainty, complexity and unprecedented loss are just some of the features scientists and critical theorists say define this ‘Age of Man,’ or the Anthropocene – a period characterized by earth-wide changes brought about (in part) by “human” activity. But another startling observation now gaining notoriety, long acknowledged by many non-western indigenous traditions, is that humans are not and have never been separate from the environments that they usually treat as mere resources. Indeed, the qualities of agency, awareness, and intelligence we traditionally reserve for our species are now thought to be more-than-human ecological processes. In short, nature is ‘alive’–more alive than we are capable of noticing. This changes everything.

In this 3-part webinar series, Bayo Akomolafe invokes the wisdom of his native lands in West Africa: “The times are urgent, let us slow down.” Reading this humbling vocation to “slow down” as an invitation to rethink our imaginations of activism, justice and power, and attend to the more-than-human processes in and around us, Bayo will present his concept of postactivism. The series will:

Entanglement means we are stranger than we can think. In this week, we explore this material strangeness of inter-being, and examine the shocking implications for our understandings of activism, change and justice.

Module 2: Staying with the Trouble

Entanglement doesn't mean all is well. We further unpack the troubling implications of entanglement and revisit classical ideas about identity, agency, and power.

The point of the Anthropocene is to notice that the land has changed, and to seek other places of power. This final session uses exercises and prompts to excavate the electrifying proposal of slowing down in times of urgency. 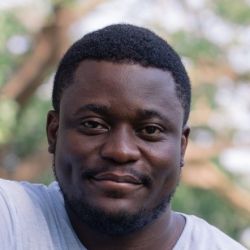 Bayo Akomolafe (Ph.D.), rooted with the Yoruba people in a more-than-human world, is the father to Alethea and Kyah, the grateful life-partner to Ije, son and brother. A widely celebrated international speaker, posthumanist thinker, poet, teacher, public intellectual, essayist, and author of two books, These Wilds Beyond our Fences: Letters to My Daughter on Humanity’s Search for Home (North Atlantic Books) and We Will Tell our Own Story: The Lions of Africa Speak, Bayo Akomolafe is the Founder of The Emergence Network and host of the online postactivist course, ‘We Will Dance with Mountains’. He currently lectures at Pacifica Graduate Institute, California and University of Vermont, Burlington, Vermont. He sits on the Board of many organizations including Science and Non-Duality (US) and Ancient Futures (Australia). In July 2022, Dr. Akomolafe was appointed the inaugural Global Senior Fellow of University of California’s (Berkeley) Othering and Belonging Institute. He has also been appointed Senior Fellow for The New Institute in Hamburg, Germany. He is the recipient of the New Thought Leadership Award 2021 and the Excellence in Ethnocultural Psychotherapy Award by the African Mental Health Summit 2022.  www.bayoakomolafe.net