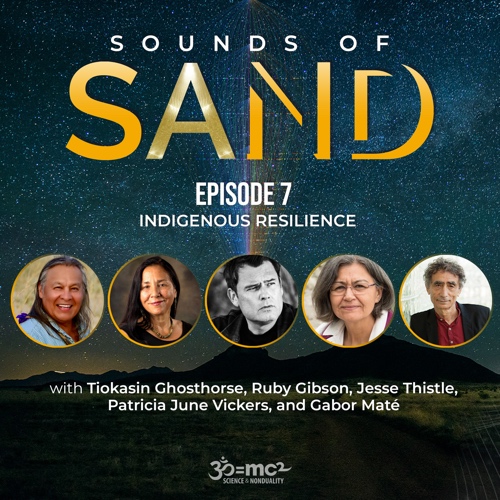 In this talk from the Talks on Trauma series from the Wisdom of Trauma All Access Pass Course. Dr. Gabor Maté hosts this expert panel of Indigenous teachers.

Patricia Vickers, Ph.D., is currently an independent consultant. She is deeply committed to founding mental health services and research on ancestral teachings and principles. In 2019-2020, she completed a nurofeedback study on Haida Gwaii with highly positive results. Her areas of inquiry include trauma from a somatic and neurobiological perspective, teachings on soul loss and soul retrieval and expressive responses to life such as song, painting and dance. She is mother of four and grandmother of nine. Her Indigenous ancestry is rooted in Heiltsuk, Tsimshian and Haida Nations through her father and British through her mother.
patriciajunevickers.com

Jesse Thistle
Assistant Professor, Author
Jesse Thistle’s award-winning memoir, From the Ashes, was a #1 national bestseller, and the bestselling Canadian book in 2020 and has remained atop bestseller lists since it was published. From the Ashes was a CBC Canada Reads finalist, an Indigo Best Book of 2019, and the winner of the Kobo Emerging Writer Prize Nonfiction, an Indigenous Voices Award, and High Plains Book Award. Jesse Thistle is Métis-Cree and an Assistant Professor at York University in Toronto. He is a PhD candidate in the History program at York where he is working on theories of intergenerational and historic trauma of the Métis people. Jesse has won the P.E. Trudeau and Vanier doctoral scholarships, and he is a Governor General medalist. Jesse is the author of the Definition of Indigenous Homelessness in Canada published through the Canadian Observatory on Homelessness, and his historical research has been published in numerous academic journals, book chapters, and featured on CBC Ideas, CBC Campus, and Unreserved. A frequent keynote speaker, Jesse lives in Hamilton with his wife Lucie and is at work on multiple projects including his next book. https://jessethistle.com/

Tiokasin Ghosthorse
Founder & Host "First Voices Radio", Speaker on Peace & Indigenous Wisdom
Tiokasin Ghosthorse is a member of the Cheyenne River Lakota Nation of South Dakota and has a long history with Indigenous activism and advocacy. Tiokasin is the Founder, Host and Executive Producer of “First Voices Radio” (formerly “First Voices Indigenous Radio”) for the last 28 years in New York City and Seattle/Olympia, Washington. In 2016, he received a Nomination for the Nobel Peace Prize from the International Institute of Peace Studies and Global Philosophy. Other recent recognitions include: Native Arts and Cultures Foundation National Fellowship in Music (2016), National Endowment for the Arts National Heritage Fellowship Nominee (2017), Indigenous Music Award Nominee for Best Instrumental Album (2019) and National Native American Hall of Fame Nominee (2018, 2019). He also was recently nominated for “Nominee for the 2020 Americans for the Arts Johnson Fellowship for Artists Transforming Communities”. He was also awarded New York City’s Peacemaker of the Year in 2013. Tiokasin is a “perfectly flawed human being.”

Dr. Ruby Gibson
Executive Director of Freedom Lodge, Author, Historical Trauma Specialist
A mixed blood woman of Native and Mediterranean descent, Dr. Ruby Gibson lives on both the Flathead Reservation in MT, and in Rapid City, SD near Pine Ridge Agency. For 30+ years, Dr. Gibson has been dedicated to the craft and science of Historical Trauma reconciliation, cultural healing, and generational well-being among Native and Indigenous Peoples. She developed the intergenerational trauma recovery models - Somatic Archaeology© and Generational Brainspotting™. Dr. Gibson is the author of two books, My Body, My Earth, The Practice of Somatic Archaeology, and My Body, My Breath, A Tool for Transformation, which are both available in English and Spanish. Using our Body and Mother Earth as benevolent sources of biological, emotional and ancestral memory, her techniques were field tested on clients and students, and researched in her Doctoral studies with amazing effectiveness. Dr. Gibson developed and teaches the Historical Trauma Master Class, and builds leadership skills in Native Wellness amongst the graduates. She is honored to witness the courage and amazing capacity that each person has to reconcile suffering. As the mother of three beautiful children, one granddaughter, and one grandson. Dr. Ruby has a heart full of hope for the next seven generations! freedomlodge.org

Dr. Gabor Maté, M.D. is a physician and best-selling author whose books have been published in twenty languages. His interests include child development, the mind-body unity in health and illness, and the treatment of addictions. Gabor has worked in palliative care and as a family physician, and for fourteen years practiced addiction medicine in Vancouver’s Downtown Eastside. As a speaker he regularly addresses professional and lay audiences throughout North America. He is the recipient of a number of awards, including a Simon Fraser University Outstanding Alumnus Award and an honorary degree from the University of Northern British Columbia. His most recent book is The Myth of Normal: Trauma, Illness & Healing in a Toxic Culture.

With Bayo Akomolafe and Sophie Strand

an organic and wild conversation between two poets, writers, philosophers and theobiologians

Singing to the Darkness

“Through altered state of consciousness work, we’re able to retrieve the parts of ourselves that broke away from trauma.”

The Art of True Feminine Leadership

Our interconnectedness is undeniable. There is a singular pulse that weaves us all together. When we lose touch with that pulse, we suffer. ⁣

Meditating the World through Compassion

Compassion is the ability, by Awareness, to recognize and acknowledge only itself everywhere.

Opening to Our Humanity and Resilence in a Time of Upheaval

two excerpts from the online SAND event with Thomas

With Bayo Akomolafe and Sophie Strand

an organic and wild conversation between two poets, writers, philosophers and theobiologians

The Relative is the Absolute

When we engage in the distortion that the relative plane is separate from the absolute, we ignore the reality of the illusion.

With Gabor Maté and Thomas Hübl

Gabor Maté prompts Thomas Hübl to talk about his understanding that trauma is not just an individual but a collective experience.

The Deeper Story behind Crises

With Jazmin Garcia and Marcus Correa

“Butterfly brought color to the world. Frog teaches you that if you put others before yourself you will reap the rewards.”