As described in my video, Upgrading Your Mental Operating System and the blogpost We need a new mental operating system… Now, we need to develop a purely secular, empirical, scientific approach to nondual awakening that will permit us to operate in a completely different manner, and soon.

Sam Harris’ new book Waking Up: A Guide to Spirituality Without Religion describes the approach he used. Sam is an insightful, intelligent, and skillful writer with a philosophy degree from Stanford and a neuroscience Ph. D. from UCLA, so he can bring a useful perspective to many issues.

Sam manifested in blogposts The impossibility of ‘free will’...scientifically and logically’, Lying - Are ‘white lies’ OK…helpful? necessary? harmful? and Who’s responsible if there’s no free will? How did guilt and shame develop?.

Sam, and the late Christopher Hitchens, defined the intellectual and scientific discourse on contemporary atheism.

Sam focused his awakening process on secular aspects of religious traditions: “Only Buddhists and students of Advaita Vedanta have been absolutely clear in asserting that spiritual life consists in overcoming the illusion of the self by paying close attention to our experience in the present moment.”

“Waking Up” details Sam’s personal journey towards awakening, through

Sam left Theravada, after a great effort of several years, because it was “explicitly goal oriented” and “... enlightenment, whatever it is, cannot be a matter of having fleeting experiences”. Mindfulness was “a means of attaining an experience…‘cessation’... a direct insight into an unconditioned reality.” He felt that there must be some mode of ordinary consciousness in which selfless awakening can be expressed. “Why not realize this frame of mind directly?” Cessation never arrived, his practice became a “vigil”, waiting for a reward, so he moved on…

Poonjaji’s advaita teaching worked, as his “influence on me was profound”. However, because of Poonjaji’s “all-or-nothing” approach which “obliged him to acknowledge the full enlightenment of any person”, many of his students deluded themselves about their spiritual attainments. (A common criticism; Ramana never declared anyone “enlightened”.) Sam watched the dissembling of one of Poonjaji’s “enlightened” folk by a Dzogchen master, so on to Dzogchen…

Sam found in Dzogchen a focus on being able to “experience the intrinsic selflessness of awareness in every moment”. Taking the “goal as the path” and realizing that “the freedom from self that one might otherwise seek is the very thing that one practices”, worked for him. He found the “goal of Dzogchen…is to grow increasingly familiar with this way of being in the world”.

On enlightenment, Sam pointed out that “Many of these (esoteric) claims are preposterous”. A example was the impossibility of “omniscience” by the Buddha, who could not be “a better mathematician, physicist, biologist and Jeopardy contestant than any person who has ever lived” or “capable of painting the Sistene Chapel”. 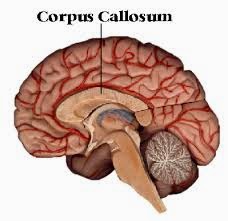 Discussing the “mystery of consciousness”, Sam drew upon the Nobel Prize - winning work of Roger W. Sperry, et al. on corpus callosotomy, the surgical severing of the fibers which pass information between the left and right hemispheres of the brain. This procedure successfully prevents local storms of activity from developing into seizures.

Callosotomy does not produce any apparent changes in behavior, even in neurological exams. However, Sperry found both functionalspecialization as well as functional independence between the two halves, i.e. separate memories, learning processes, behavioral intentions, and apparently centers of conscious experience as shown at right.

How this manifests is shown below. The right hemisphere is shown the word “key” in the left field of view (they cross over). However the subject, speaking from his left hemisphere, will say he has seen “ring”. However if the subject is asked to select w/his left hand (right hemisphere) what he saw, he will pick out the key. 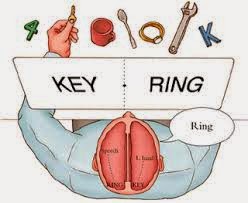 If asked to speak/name what is in his left hand, w/o showing it to the left hemisphere, he will be unable to reply.  If shown the key and being asked why he picked it from among the other choices, he will confabulate some answer.

The two hemispheres can perform separate manual tasks like drawing different figures with each hand simultaneously and even sabotage each other’s work. Years after surgery, the left hemispheres will express surprise and irritation when the right hemispheres respond to instructions. Each hemisphere even has its own beliefs, and addresses each other directly.

Well, where did the “I” go when the brain divided, to the left or to the right? Harris says that the question makes no sense as it assumes that there is a “self bobbing on the stream of consciousness like a boat on the water”.

Harris adds, “... the only thing that actually exists is consciousness and its contents…There is no stable self that is carried along from one moment to the next”. Even though you feel like an internal self in most waking moments, there is no self to be found anywhere.

As far as “thought”, Harris says that “We spend our lives lost in thought.” In Eastern contemplative traditions, being distracted by thought is understood to be “the very wellspring of human suffering.”

“Being lost in thoughts of any kind, pleasant or unpleasant, is analogous to being asleep or dreaming. It is essentially a form of psychosis.”

On “gurus”, Sam is adversarial. “If your golf instructor were to insist that you shave your head, sleep no more than four hours a night, renounce sex, and subsist on a diet of raw vegetables, you would find a new golf instructor.”

He continues “... a person’s desire to win the teacher’s approval can often be exploited - emotionally, financially and sexually…moral intuitions and instincts for self-preservation can always be recast as symptoms of fear and attachment. Consequently, even the most extraordinarily cruel or degrading treatment at the hand of a guru can be interpreted as being for one’s own good.”

“The positive experiences were more sublime than I could ever have imagined… My ‘bad trips’ were… the most harrowing hours I have ever endured, and make the notion of hell… perfectly apt.”

“I believe that psychedelics may be indispensable for some people - especially those who, like me, need convincing that profound changes in consciousness are possible. After that, it seems wise to find ways of practicing that do not present the same risks. Happily, such methods are widely available.”

Concluding, “In fact, we can directly experience that consciousness is never improved or harmed by what it knows. Making this discovery, again and again, is the basis of spiritual life.”

“Everything we take ourselves to be… depends upon distinct processes that are spread all over the surface of the brain… The sense that we are unified subjects - the unchanging thinkers of thoughts and experiencers of experience - is an illusion.

Sam admits that his awakening is only sporadic, but increasing.