The Soul of an Octopus, A Book Review

First published in May 2017 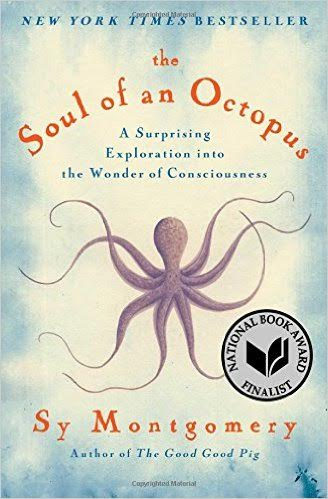 The Soul of an Octopus
A Surprising Exploration into the Wonder of Consciousness
By Sy Montgomery
Simon and Schuster, 2015262 pages

I grew up as a student biologist with the unquestionable rule that you do not talk about animal behavior in human terms. A dog could not be pleased to see you, a parrot could not be playful, an octopus could not be sad. Anthropomorphism was a crime.

I soon realized I was not cut out to be a biologist, as the opposite seemed equally inappropriate to me. What right had we to call someone slothful, or use the phrase monkey business? How could we know the time-scale of a sloth? And why should humans have a monopoly on consciousness? My dog didn’t just wag his tail and lick my face when I appeared, but actually loved me. It took time for the extreme beliefs of behaviorism to fade. In 1989 veterinarians in the United States were still being taught to ignore pain in animals. But with the turn of the century the prevailing view began to change, scientific papers were published on intelligence in animals and more and more scientists began to suspect that consciousness might not simply be a function of brain size. In 2012, a group of neuroscientists signed the Cambridge Declaration on Consciousness, which “unequivocally” asserted: “Humans are not unique in possessing the neurological substrates that generate consciousness. Non-human animals, including all mammals and birds, and many other creatures, including octopuses, also possess these neural substrates.”

In 2012 the scientific establishment still assumed that it is the “neurological substrates” that (somehow) generate consciousness. At SAND conferences we are lucky enough to rub shoulders with tenured professors from prestigious universities who not only reject the idea that consciousness is a function of brain size, but argue that the seat of consciousness might not be the brain at all.

The Soul of an Octopus does not explore the mystery of consciousness in a metaphysical way, but goes a long way to debunk the myth of anthropomorphism and make the universality of consciousness the default worldview for the general reader. It persuades by osmosis rather than argument, telling the story of the author’s many encounters with Athena and Octavia and Kali and Karma at the New England Aquarium in Boston, and convincing by its very storytelling ordinariness – by observing and reporting their behavior. Would that this kind of meticulous observation had earned the name behaviorism!

Sy Montgomery is a wonderful story teller. She has written many books, usually as a naturalist, often with animals as heroes. She is also a very good writer, and brings humor and passion to her work that raises it above the level of science journalism. The Soul of an Octopus was a 2015 National Book Award Finalist. The author quotes the Cambridge Declaration in the book, and charmingly and proudly italicizes the key words including octopuses.