The Idealist Symbolism of the Christmas Archetype

As we experience the afterglow of Christmas — the date that symbolically commemorates the birth of the Christ in the Christian world — I wanted to share some reflections about its archetypal symbolism. Just as Pentecost symbolically marks the Divinity’s entrance into Its own Creation in ethereal form (the Holy Spirit), Christmas symbolically reminds us of God’s entrance into the world in human form. Surprising as this may sound to the average Christian, this archetypal idea of the Creator entering Its own Creation is by no means exclusive to Christianity

In the creation myth of the Aranda people, in Australia, the Creator deity Karora dreams the world up as He sleeps. He then wakes up in His own dream, effectively entering it. Once within the dream, Karora even eats some of the animals He’d imagined into existence. On the other side of the world, the Witoto people of the Amazon jungle believe their Creator deity Nainema also imagined the world into existence while in a state of slumber. He then stamped on His own imaginings and eventually penetrated them, subsequently spitting the jungle into existence. In a foundational Hindu myth, the supreme deity Brahman creates the basic scaffolding of the world as a thought in his mind. Brahman then births Itself into Its own imagination, by imagining a cosmic egg and then hatching from it. And so on. More details about all these myths can be found in my upcoming book More Than Allegory. The key point, however, is that cultures across time, geographies and languages have expressed this primordial notion that God imagines the world into existence, and then enters Its own imagination. Isn’t this a fair way to also describe what happened when the Christ was born? Symbolically speaking, wasn’t the Christian God also entering His own Creation in the form of Jesus, the man? The human mind, in its trans-intellectual and trans-linguistic depths, has always known something about this; something more true than mere allegory, which it has expressed in profoundly symbolic, mythical forms.

Remember: according to the Christian myth, Jesus wasn’t only the son of God. He was God incarnate. It is this identity between God and human that gives us symbolic clues about the metaphysics suggested by the religious myths mentioned above, including the Christian myth. There is a passage from More Than Allegory that discusses this. I will quote it below but, first, I need to quote another passage that explains what I call the cognitive ‘big bang’:

The present moment is the cosmic egg described in so many religious myths, which we briefly discussed in Part I. It is a singularity that births all existence into form. It seeds our mind with fleeting consensus images that we then blow up into the voluminous bulk of projected past and future. These projections are like a cognitive ‘big bang’ unfolding in our mind. They stretch out the intangibility of the singularity into the substantiality of events in time. But unlike the theoretical Big Bang of current physics, the cognitive ‘big bang’ isn’t an isolated occurrence in a far distant past. It happens now; now; now. It only ever happens now. (pp. 102-103)

And now the passage about the Idealist metaphysics hinted at in many of the world’s religious myths:

Significantly, idealism is precisely what many of the world’s religious myths have been hinting at for thousands of years, as discussed in Part I. In the Arandan, Uitoto and Hindu myths we explored, as well as in the Hermetic myth that underlies Western esotericism, the world is seen as the mental activity of a cosmic mind. As a matter of fact, the sophisticated Vedanta school of Hinduism states explicitly and unambiguously that all phenomena unfold in consciousness alone. The same notion is found in Buddhism, particularly the Yogācāra School. Even the Christian New Testament hints at this in a magnificently symbolic way when John the Evangelist writes: ‘In the beginning was the Word, and the Word was with God, and the Word was God. ... Through [the Word] all things were made.’ ‘Word’ here is a translation of the original Greek Λόγος (Logos), which also means reasoning or thought. So through thought ‘all things were made.’ 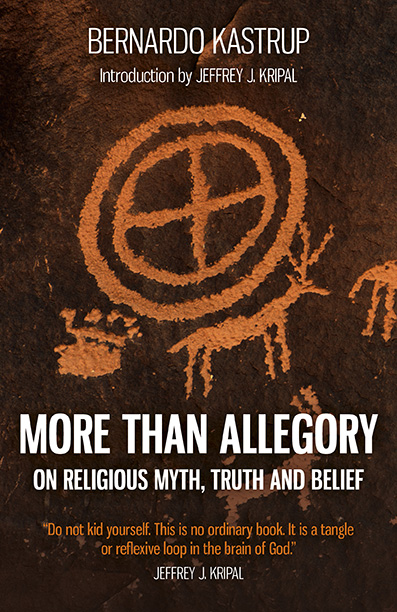 Kripal states that ‘Logos here does not refer to some form of rationalism or linear logic, but to a kind of cosmic Mind, universal intelligence, or super-language out of which all that is emerges and takes shape. Logos is not human reason here. It is “with God.” It is God.’ Yet, John has the Logos incarnate as a man, Jesus. So this ‘cosmic Mind’ is also the human mind. The Logos is also human reasoning because God was also the man Jesus. Indeed, as we’ve seen in Part I, the words of language are the form and manifestation of human thought.

Ponder about this for a moment: just as John’s incarnated Logos makes all things, the cognitive ‘big bang’ resulting from human reasoning (logos) creates the substantiality of the universe across space and time through a trick of self-reference. As God is born within His own creation as the Christ, Brahman is born in primordial waters from the cosmic egg—the singularity—that Brahman Itself created, subsequently uttering ‘the Word’ to bring forth the world’s substance. The self-referential, circular character of the process and its parallels with the cognitive ‘big bang’ are even more striking here.

And it goes on and on: Nainema breaks into his own illusion to spit—a movement of the mouth, like the utterance of words— the substance of the forest into existence, while Karora wakes up within his own dream to experience, by eating, the substance of the animals sprouted from his own navel. Do you see how different peoples have been trying to suggest the same subtle cosmology through the symbolism most evocative to their respective cultures? The world we ordinarily experience is a mental creation. Its concrete form arises out of emptiness through cognitive self-reference, a process whose inherent circularity makes you believe that you were born in the world. But it is you, through your human thinking, who is creating the whole of it now; now; now. (pp. 110-111)