The Chance Events That Gave Rise to Humans 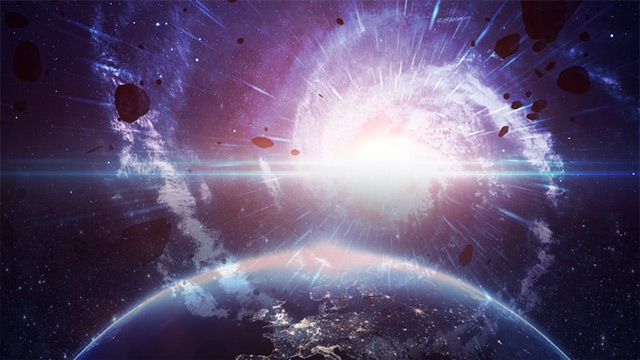 Humans are the only creature on Earth to have left the planet, trading our comfortable terrestrial existence for the snug confines of a rocket, shuttle, or space station orbiting in the vast emptiness above. As far as we know, we are also the only creatures in the galaxy or universe to have accomplished this feat.

We have other unique attributes, of course — like being able to read this sentence and wonder what led to our remarkable existence. On BBC iWonder, physicist Brian Cox provides a quick overview of the many events across the ages that led to the existence of planet-circling humans today. Here they are.

Stepping back to one million years ago, we find the birthplace of human intelligence — the Great Rift Valley of East Africa, where our ape ancestors started a long trend of increasing brain size.

During this time, the Earth’s climate was undergoing “rapid and violent” change. Greater intelligence — and adaptability — would have given our ancestors an evolutionary advantage, allowing them to survive whatever came their way.

This period of climate change occurred only because of the way the solar system is arranged. The pull of gravity from the sun, moon, and other planets changes the shape of the Earth’s elliptical orbit, over thousands of years. One million years ago, it was at its most elliptical, hence the rapid climate change.

Asteroid clears the world for mammals

Dinosaurs dominated the Earth for over 160 million years, until they were wiped out by an asteroid 65 million years ago. When this six-mile-wide space traveler collided with the Earth, it sent rock and dust into the atmosphere, cutting off the sunlight.

This was bad news for dinosaurs, most of which were killed, along with over half of all life on Earth. But a certain small shrew-like mammal benefitted from the dinosaurs’ absence. The descendants of this creature include the Rift Valley apes — and all humans.

Bacteria turn on the oxygen

For billions of years, the Earth’s atmosphere lacked one key component that we often take for granted — oxygen. Bacteria living during this time fed off methane, carbon dioxide, and other gases.

But 2.4 billion years ago, along came a new bacteria with a new skill. Cyanobacteria were able to use sunlight for energy, a process known as photosynthesis. Oxygen was a byproduct of this reaction. Over time, the amount of oxygen in the air increased, which made it possible for all animals to evolve.

Further back, about 2.7 billion years ago, another type of collision jump-started complex life on Earth. Prior to this, all life consisted of simple, single-celled organisms. But at some point, two cells merged, giving rise to a hybrid that led to all animals and plants.

You still find traces of this early merger in our own cells, which contain structures called mitochondria. Scientists think that these powerhouses of the cell were once separate bacteria that were absorbed by another single cell.

Life on Earth can trace its earliest origins to about 3.8 billion years ago. Scientists don’t know exactly how it happened, but they have some guesses.

In the primordial soup of Earth, possibly near underwater hot springs, chemicals and energy combined to create the first forms of life. If the conditions hadn’t been just right, though, Earth might still be covered with a lifeless soup.

Earth hasn’t always been a water-rich planet. Once upon a time, it was a molten ball of rock. Any water that existed evaporated into space. But this changed about 4 billion years ago.
Erupting volcanoes spewed water into the newly forming atmosphere. Icy comets that crashed into the planet brought more water. Eventually the blue-green Earth had enough water sticking around to make life a possibility.

A moon over paradise

The moon does more than light up our sky. It changes the Earth’s path through space, affects our climate, and has shaped how life evolved. But we didn’t always have a moon.
The moon was born about 4.5 billion years ago when another planet crashed into the Earth. The other planet was destroyed in the process. But debris that broke off from the Earth eventually coalesced into the moon.

The spark of life

Go back to 4.6 billion years ago and you’ll find the birth of our sun — something that is essential for humans and all life on Earth. Scientists think that an older star ignited a cloud of cosmic dust, giving rise to our sun and the planets in our solar system.

It all started with a bang

As long as we’re talking about beginnings, why not look at how our universe started. About 13.8 billion years ago, the Big Bang led to our Universe — along with constants like the speed of light, the number of dimensions in space, and how strong gravity is. If things had been just a little different, we might not be here today to wonder about that long-ago explosion.
Are humans inevitable?

Some scientists think that our universe is just one of many possible universes. There might even be an infinite number of them. According to this model, these universes have different physical constants — such as gravity and the speed of light. So we might be living in the universe where all the constants lined up perfect so that human intelligence was bound to happen.