The Bottomless Pit Behind the Word Consciousness - Part 3, Mauro Bergonzi 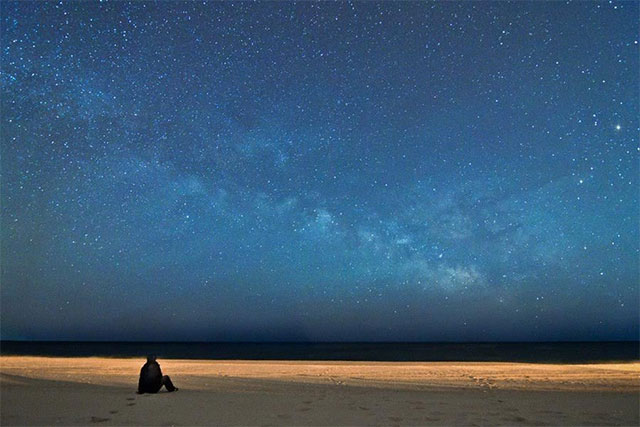 Mauro Bergonzi: But since any change can be perceived only by virtue of a changeless background, who or what notices the coming and going of the sense of being? This presence is the bottomless ground of everything, the unknown source of awareness itself, so perfectly whole, so perfectly full and non-dual, that it has no need whatsoever to divide itself in two parts, being and awareness of being - no need. And thought cannot, of course, understand it.

Hypnotized as we are, by the illusory idea of being only a tiny fragment separated from the whole, we are therefore hounded by a deep sense of lack that prompts us to pursue a completeness that always eludes us. In our everyday existence, we ceaselessly go after external goals - the next salary, the next mate, the next vacation, the next work, the next house, and so on. But life is too vast, too exuberant to reach, to be confined within the boundaries of one specific goal. Life is not a process. As Nisargadatta used to say, Life is not a process that occurs in time. It is an endless explosion.

And at every moment it is possible just to realize that I am not a separate individual, but rather what we could call the dance of the whole. And this is beauty. And this being the case, teaching people how to become what they already are would be as arrogant and foolish as teaching waves how to become the sea or water.

We don’t need to understand that mystery, simply because we are it. Actually, in one’s direct and immediate experience, everything - thoughts, perceptions, attention, suffering, the dualistic stance, and even the idea of awareness, and even the idea of non-duality - all are just phenomena arising and passing away in and as the mysterious aliveness that we are.

The first time that a hint of this aliveness appeared in the story of my life, was in 1981 when I had the privilege to meet for a few days Nisargadatta Maharaj, just six, seven months before his death. He was still very energetic but because of the cancer at the throat he used not many words. He didn’t explain very much. He was just saying very direct sentences, pointing directly to the absolute. I remember the first day, I was sitting in that small room with not more than fifteen, twenty people. I decided to be in silence and just to listen to what was happening. But Nisargadatta, who in those days like to stand instead of sitting, came just in front of me and directly asked, Do you have any spiritual practice? And, What do you do?

At that time I had been doing meditation for about nine, ten years, mostly Vipassana meditation but with some experience in Zen and Dzogchen and so on, so I tried to describe my practice, saying I look at things and let them go. And Nisargadatta said, And when everything is let go, what remains? And I knew the answer because in my Vipassana practice I got accustomed to understand that all physical, mental processes just arise in passive way, so they are not really me. I am the witness, I am awareness, that was for me the bottom line of my identity at the time.

So I said, Everything arises and passes away in the field of awareness. When everything is let go what remains is awareness itself. But then Nisargadatta put me a question that I never supposed possible to think, because he asked, And when even awareness is let go, what remains? And of course I had no answer. So I said - I was very surprised at this question, really - so I said, I don’t know. And at that moment he was looking directly into my eyes with his eyes. You know the eyes of Nisargadatta were very, very full of fire, full of passion for truth.

And something very strange happened to me because I felt suddenly pushed back behind awareness and falling down into a bottomless pit of the unknown, and it was a wonderful but terrifying experience. So my body-mind complex just grasped at the surface.

It was strange because in the following few days in Bombay, from time to time in everyday life, sitting in a taxi or drinking a chai, it was happening again, this falling back into the unknown and then this going to the surface.

I felt that it was a very important experience, that. Then the last day I was there Nisargadatta told me the following words. He told me, Don’t lose yourself in the many branches of the many useless questions of your mind, but go straight to the root. Go to the source. And then he said, I throw you there. And then he said, Moreover I bury you there. Very strange. And stay still and there until even the seeker dies. Then you will find yourself beyond in the unknown.

I understood his words but I didn’t grasp the deep meaning for a long time. Why? Because my mind in those days had already began to build up an interpretation of what was happening, and the interpretation was as follows:

Nisargadatta responded to me with the way to liberation that at the time for me was a goal to reach - free falling into that bottomless pit. But my ego was too strong so it tried to go to the surface, so I had to do more and more meditation in order to melt down my ego. And so I went on doing meditation for another fifteen years. I am very slow to understand things, but when I understand I understand.

So I didn’t get the essence of what he said the last day until the seeker died, because I went on seeking with this idea that I was separate from liberation. Liberation is over there somewhere else and I have to follow a path in time in order to approach and reach liberation. This is the essence of duality, because if liberation is true reality, it is here. If you look for God, God is everywhere, so he must be here now. If you are looking for the whole, if there is a whole, it must comprehend us and here, otherwise it’s not the whole. It’s the whole but doesn’t include us! If you look for your true self, it could be only where you are, your true self.

And so to conclude, you can see, hear, whatever I have called it, as objects. You feel your breath, you feel your heart, you hear my voice, and you see all these colors. And while you are doing that, if you just take a little step back, you can sense the sensitive space of awareness where everything appears. It’s something very tangible for me, it’s the light that makes all those things appear. And if you – it’s not even necessary to step back - if you just let go even this, ah . . . , there is this falling into a bottomless pit. And I think the true meaning of the end of the seeker, from the point of view of the presence that we are, is it is totally irrelevant whether you are free falling into the bottomless pit of the unknown or if you are trying to grasp the surface. Because when you are in free fall in the unknown it is presence appearing as free falling, and when you are trying to grasp the surface, it is presence appearing as grasping the surface.

I’d like to conclude, since I have spoken about Nisargadatta, with some sentences of his that I find very, very inspiring. He says, I do not negate the world. I see it appearing in consciousness which is the totality of the known in the immensity of the unknown.

That’s it, thank you.