In some ways, the history of science is the history of a philosophical resistance to mythical explanations of reality. In the ancient world, when we asked “Where did the world come from?” we were told creation myths. In the modern world, we are instead told a convincing scientific story: Big Bang theory, first proposed in 1927 by the Belgian Roman Catholic priest Georges Lemaître. It is based on observations that galaxies appear to be flying apart from one another, suggesting that the universe is expanding. We trace this movement back in space and time to nearly the original point of the explosion, the single original atom from which all the universe emerged 14 billion years ago.

While it is based on empirical measurement and quantitative reasoning, it is also a creation story, and therefore shares some of the traits of the stories that have come before. For one thing, it resonates with the ethos of the modern age—this is the era of big explosions, like those in White Sands and over Nagasaki. Also, like all creation stories, it explains in comprehensible language something which otherwise requires unobtainable categories of thought. After all, we cannot really know what the world was like before its creation. But we do see how things around us change, grow, are born, and die. And, like the ancients, we fashion these observations into the story of our creation.

The oldest creation myth on the planet, from perhaps 2600 B.C., was given as a preface to a Sumerian poem about the descent of Gilgamesh’s friend Enkidu into the underworld. The account begins:

At some time, the myth tells us, heaven and earth were united, and then they were separated. The separation of Sky and Earth made possible the appearance of man. The poem introduces us to elements that we see repeated again and again in ancient myths: First, creation was not from nothing, which you never find in ancient myth, but from something that was already there. What was it? In a tablet listing the Sumerian gods, the goddess Nammu is said to be “the mother, who gave birth to heaven and earth” and her name is written as a sign that means “sea.” Second, the act of naming and spoken language is deeply mixed into the act of creating: Man is created only “after [his name] had been fixed.”

We see these two elements used in the pyramid texts, which come from Egypt around the year 2300 B.C. and are the oldest religious texts in the world, and some of the oldest texts of any kind. They refer to the creation of the world in order to guarantee the vigor of the glorified king, buried in an artificial primeval hill. On this hill, Atum, the creator god took his stand:

O Atum-Kheper, you who were on high on the primeval hill! You did arise as the ben-bird of the ben-stone in the ben-house in Heliopolis. You did spit out what was Shu, you did sputter out what was Tefnut. You did put your arms around them as the arms of a ka, for your ka was in them.

Atum, “the complete one,” is the sun-god, always the great god in Egypt, the principle of unified creative power. Kheper, the scarab, means “the becoming one,” hence the principle of generation, a force for change and progress. The creation is imagined as an event like when the ben-bird (our word “phoenix,” through the Greek) bursts suddenly, astoundingly, from the reeds. Then the ben-bird alights on top of the primeval mound, symbolized in Egyptian architecture as the obelisk in the temple of the Sun in the “city of the sun,” Heliopolis, near modern Cairo. That’s what the moment of creation was like to the ancient Egyptians.

Of course Atum-Kheper is still all alone on the primeval mound, so he “spits” out Air (Shu) and “sputters” out Moisture (Tefnut), the first duality, the source of all that is. The Egyptian is punning on Shu and Tefnut, which sound like “spit” and “sputter” in Egyptian. Then he puns again, because the Egyptian hieroglyph for ka, which we might translate as “vital force,” are two upraised arms, and this ka Atum-Kheper placed in Shu and Tefnut.

Such puns are not funny: In the resemblance of words to one another lie the deepest secrets of the universe, the Egyptians thought. We are reminded both of the power of naming in the Sumerian story, and of the power of common mathematical forms, in modern physics, to point us to the deep realities of nature. The children of Shu and Tefnut are Geb, “Earth,” and Nut, “Sky,” just as in ancient Sumer. And like in ancient Sumer, the moment of the universe’s creation consists of one thing becoming two through the agency of the mouth, even as in the Sumerian account man is spoken into existence. Again, we are reminded of the creation of matter and anti-matter at the moment of the Big Bang, which we expected to be created in equal proportions, but were not, making for an outstanding puzzle in modern cosmology. 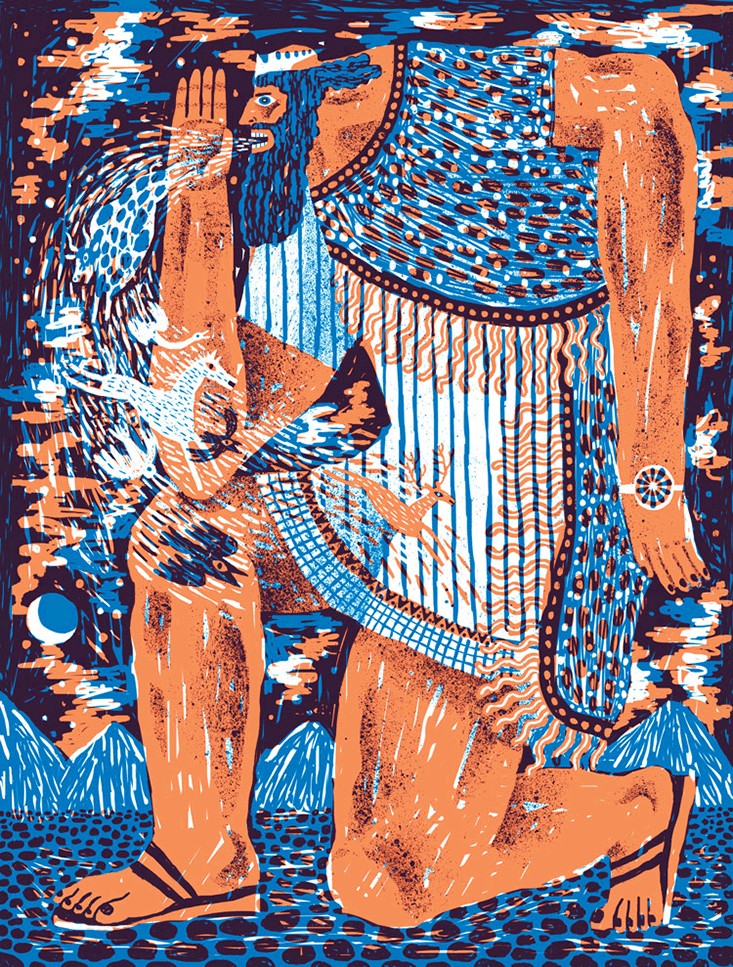 For most Westerners, the most familiar myth of the creation, even a canonical account, is verses one through eight in Genesis. It is therefore hard to hear the words in their original meanings. An examination of the opening lines of the Hebrew text, however, reveals parallels with the creation myth of ancient Mesopotamia:

In the beginning, when Elohim created the heaven and the earth, the earth was a formless and unbounded mass, with darkness covering its fluid chaos and with a wind from Elohim sweeping over it. Elohim said, “Let there be light!” and there was light. Elohim saw the goodness of the light and separated it from the darkness. The light he called “day” and the darkness “night.” Thus evening and morning came into being, a complete day. Then Elohim said, “Let there be a partition in the middle of the watery chaos, spreading out to separate the waters.” So it came about, and the partition divided the waters below it from those above. Elohim called the partition “sky.”

In the Mesopotamian and Egyptian accounts, the great elements of nature are gods, whereas in the monotheistic Hebrew account the powers that made the world are stripped of personal names and attributes. “Elohim” is a plural form meaning “gods,” but it seems in the context to refer to a single God (it is usually translated “God”). This usage probably descends from a time when there were many gods. Again, we see that in the beginning heaven and earth (An and Ki, Nut and Geb) were together. The Hebrew word for “wind” is ruach, which, like Greek pneuma and Latin spiritus, may mean air in motion, breath, or psychological power. In a polytheistic system the ruach is Enlil, god of the storm, who separated heaven from earth. In Egypt, it was Shu, “air,” who separated Geb from Nut in representations in many Egyptian papyri.

As in Sumer, creation in the biblical account is by speech: Night and day are called into being, just as the Sumerian account refers to the time “After the name of man had been fixed.” Once again, to name is to call into existence. As in Sumer, creation is by separation: there is a partition, literally, “something solid,” in the middle of the watery chaos.

Why does the sea feature so prominently in Sumer and Judeo-Christian myth? We take from what we see around us and suppose that the universe is governed by the same processes. Human babies are born in a sack of water and of course all sorts of things emerge from the sea. The sea is formless and dark and mysterious and hence an excellent symbol for the conditions that logic tells us must have existed before creation. Today, we look to the shapeless, formless sky for our creation story, and not the sea. For the lay person, the naming of the process discovered by science—“Big Bang”—is in some ways the content and comfort of the story. Even as science reveals new layers of our reality, creation stories remain just that—stories giving us explanations in comprehensible language of something which otherwise requires unobtainable categories of thought.

Barry B. Powell is the Halls-Bascom Professor of Classics Emeritus at the University of Wisconsin-Madison. He has written many books on myth, Homer, and the history of writing.