Taste the Sky: Love Made Visible Through Art & Poetry

“This weave of sacred poems and images evokes the mystery of formless heartspace…a generous, grace-filled offering!”
–Tara Brach, author of Radical Acceptance and Trusting the Gold

Friends of Science and Nonduality Rashani Réa & Chelan Harkin have a new book of artwork and poems available now to purchase.

Below is one of the poems from the book:

More often than not
anything that can truly reach a heart
comes from a heart
whose wounds have become so unbearable
they must burst into song. 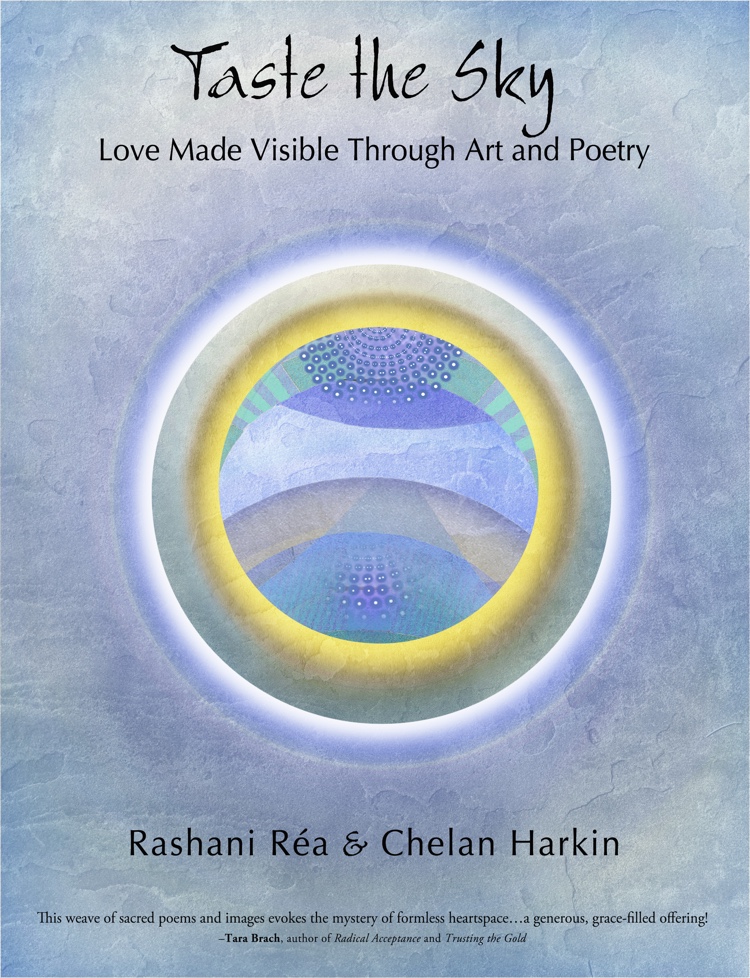 This morning before dawn I opened my laptop to begin writing an introduction for Taste the Sky—the book that you are now holding. While glancing quickly through a long list of emails in the inbox, I noticed an email from Matthew Fox via The Shift Network, sent at 4:02 a.m. Though I was intending to only write before the sun appeared—and not read emails—my index finger gently tapped the bold font in the small rectangular box.

I felt summoned by the synchronicity. Matthew is a remarkable theologian and contemporary mystic who I deeply respect. His “creation spirituality” is stunning. He focuses on what he calls the “primal sacraments,” which are land, wind, sea and fire, life — the universe itself. I love how unexpected gifts arrive like this.

Beneath the Shift Network logo were the following words, sent as a personalized group missive:

It’s no secret that we are living in fraught times, dangerous times, times that are demanding — on our souls, psyches, communities, and the planet itself.

How do we ground ourselves so that we can keep our balance, act out of integrity, and contribute to a saner, safer, and more sustainable world?

That is the main reason for listening to the mystics—because they awaken the mystic in us. Carl Jung wrote, “It is to the mystics that we owe what is best in humanity.”

Mystics not only name the depths of living, its joys and its tragedies, but also give us practices that allow us to stay centered and on a right path through difficult times — a path that includes celebration and gratitude on one hand, yet also silence and attention to the suffering in ourselves and the world on the other...”

As a mystic who has traversed a “pathless journey” since childhood—hurled unexpectedly from what seemed like security and stability at the age of twelve, when my 19-year-old brother was found dead one morning—I resonate with everything expressed here except the part about staying centered on “a right path”. Having been introduced to and profoundly influenced by Jiddu Krishnamurti five years after my brother died, I was—and continue to be—in alignment with what he referred to as “the pathless land”. In 1929, during a talk in Ommen, Holland, Krishnamurti said to a group of more than three thousand people, “I maintain that Truth is a pathless land, and you cannot approach it by any path whatsoever, by any religion, by any sect...”

Also, I find it impossible these days to label anything as right or wrong. A-n-d, at the same time, I understand completely what is being expressed in the above words. I’m all for celebration and gratitude, silence and paying attention to the suffering in ourselves and throughout the world.

Yes, I discovered during puberty that security and stability are not the ultimate foundations, as Chelan Harkin says in one of her poems:

“security and stability are not the ultimate foundations love is
and She is a wild, thrashing thing
and in Her desire for all of you
She will undo you from everything.”

There are probably several definitions of the word, “mystic”. The definition that rings true for me in this moment is by Mirabai Starr, author of Wild Mercy: Living the Fierce and Tender Wisdom of the Women Mystics. She writes, “A mystic is a person who has a direct experience of the sacred, unmediated by conventional religious rituals or intermediaries.” For some people, the word itself might seem occult or other-worldly. We know of ancient mystics but what does it mean to be a present-day mystic and how can we locate that in ourselves? Being a mystic is not some grandiose, supernatural state of being. Present-day mystics come in all shapes and sizes, ages, genders, sexual orientations, ethnicities and nationalities, castes, colors and creeds. And like Shambhala warriors, they wear no insignias or uniforms that distinguish them from anybody else. My friend, Leslie Lembo, wrote a song with a refrain that says, I’m just a frustrated mystic living in the modern world.

Purchase Taste the Sky: Love Made Visible Through Art & Poetry

"Do not force the healing, my love. Healing is always unforced."

Zen Buddhism and its relation to Nonduality, the symbolism of the ensō (円相, "circular form") calligraphy, and the Heart Sutra

A duet of cello and birdsong

Dazzling timelapse shows how microbes spoil our food – and sometimes enrich it.