I saw it with my own eyes' is something people often say. The implication is that since we perceived something, it must have happened.

But what we perceive can be influenced by a great many things, and a strange new experiment shows just how easily our perceptions can be manipulated by our own expectations and assumptions.

In a new study, scientists discovered a "novel perceptual illusion" that effectively reorders the perceived temporal order of events in a sequence.

"Is our perception of time and temporal order a faithful reflection of what happens in the world (or at least what arrives at our retina) or can seemingly higher-level expectations, such as [presumed] causality, affect the order in which we experience events occurring?" writes a team of researchers led by first author and experimental psychologist Christos Bechlivanidis from University College London.

In a series of experiments, the researchers showed over 600 participants an animation in which a seemingly simple 'ABC' chain of events appears to take place: an A square collides with a B square, which in turn collides with a C square.

In a previous study co-authored by Bechlivanidis, researchers found that when the ACB animation is shown, many people remember the chain of events as ABC, with their perception of temporal order seemingly being influenced by their expectations of causality.

"Initially we became interested in backwards causation, and whether, under some circumstances, people can perceive causes happening after their effects," Bechlivanidis told PsyPost.

"After running a few experiments, we quickly realized that the expectation of a temporal direction (that causes precede their effects) is so strong that even if we reverse the order, people insist to have seen the causes happening first."

One explanation for the phenomenon is that people may be misremembering what occurred when they later retrieve the memory after seeing the chain of events – what researchers labelled the 'memory hypothesis'. 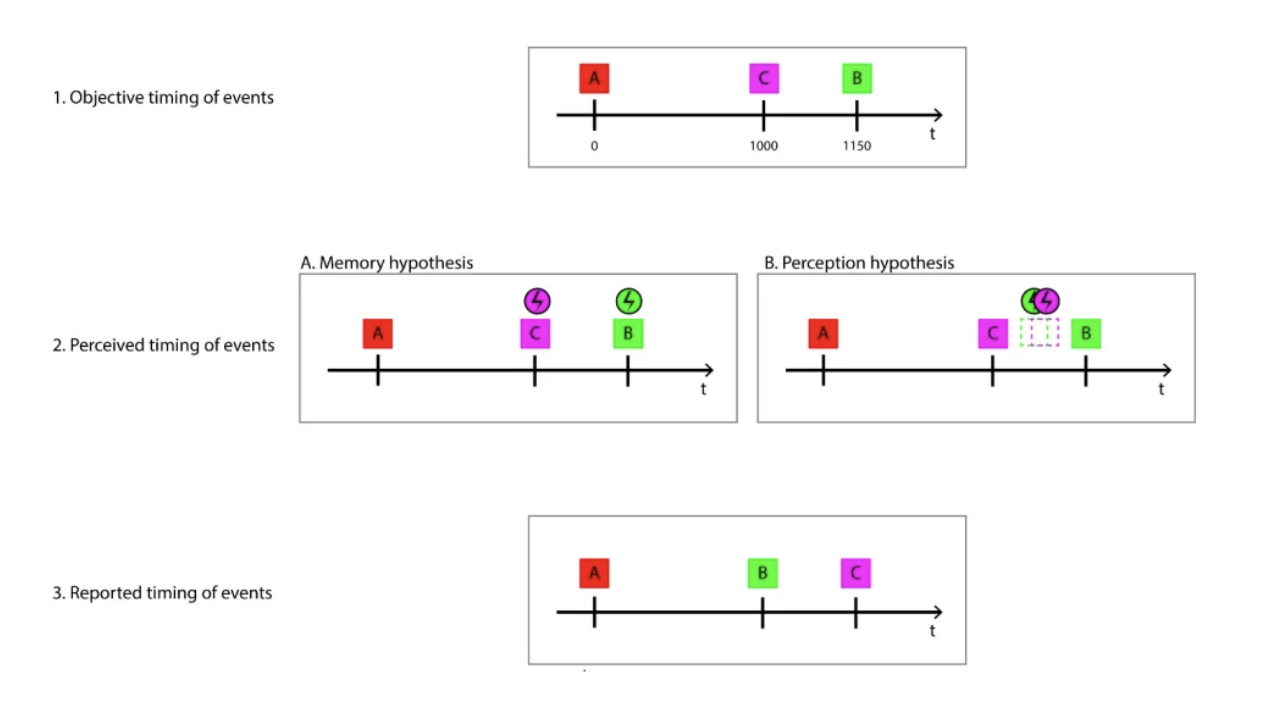 Indication of flash timing based on perception of the sequence.
(Bechlivanidis et al., Psychological Science, 2022)

In the new experiments, Bechlivanidis and his team again showed participants the ACB animation, but this time they recorded the participants' responses in real-time, asking them to indicate the moments when B and C begin to move by synchronizing their timing with a brief flash that appeared on the screen.

If the memory hypothesis were correct, as per the figure above, participants would indicate the timing accurately in real-time. However, despite repeated viewings, the experiment showed people actually perceiving B moving earlier than it really did, while C appeared to move later.

"When watching the reordered ACB sequence, participants actually perceive B happening earlier and C happening later, at timings that in total approach the temporal displacement necessary to turn the ACB sequence into the causal ABC one," the researchers explain in their paper.

"Displacements of such magnitude were not observed when one of the objects was hidden. It is thus the illusory causal context that produces the online reversal of temporal order."

While there's much we still don't fully understand about this perceptual illusion, the researchers say our ability to objectively perceive the timing of a signal is superseded by inferences we make regarding the timing of its transmission, irrespective of the nature of the signals.

In this case, the domino-like physics of an assumed ABC chain of events overrides our ability to perceive what's really happening, with strong causal expectations overpowering incoming information from a visual signal.

As for how deep the illusion goes remains to be seen, but it's just the latest evidence of the surprising ways our perception is affected, as the brain tries to juggle the non-stop flood of visual information we're bombarded with.

The findings are reported in Psychological Science.

The Minotaur Dances the Masculine Back into the Milky Way

An excerpt from the new book "The Flowering Wand: Rewilding the Sacred Masculine"

The complex behaviors may have a shared evolutionary origin