We take for granted that an event in one part of the world cannot instantly affect what happens far away. This principle, which physicists call locality, was long regarded as a bedrock assumption about the laws of physics. So when Albert Einstein and two colleagues showed in 1935 that quantum mechanics permits “spooky action at a distance,” as Einstein put it, this feature of the theory seemed highly suspect. Physicists wondered whether quantum mechanics was missing something.

Then in 1964, with the stroke of a pen, the Northern Irish physicist John Stewart Bell demoted locality from a cherished principle to a testable hypothesis. Bell proved that quantum mechanics predicted stronger statistical correlations in the outcomes of certain far-apart measurements than any local theory possibly could. In the years since, experiments have vindicated quantum mechanics again and again.

Bell’s theorem upended one of our most deeply held intuitions about physics, and prompted physicists to explore how quantum mechanics might enable tasks unimaginable in a classical world. “The quantum revolution that’s happening now, and all these quantum technologies — that’s 100% thanks to Bell’s theorem,” says Krister Shalm, a quantum physicist at the National Institute of Standards and Technology.

Here’s how Bell’s theorem showed that “spooky action at a distance” is real.

The “spooky action” that bothered Einstein involves a quantum phenomenon known as entanglement, in which two particles that we would normally think of as distinct entities lose their independence. Famously, in quantum mechanics a particle’s location, polarization and other properties can be indefinite until the moment they are measured. Yet measuring the properties of entangled particles yields results that are strongly correlated, even when the particles are far apart and measured nearly simultaneously. The unpredictable outcome of one measurement appears to instantly affect the outcome of the other, regardless of the distance between them — a gross violation of locality.

To understand entanglement more precisely, consider a property of electrons and most other quantum particles called spin. Particles with spin behave somewhat like tiny magnets. When, for instance, an electron passes through a magnetic field created by a pair of north and south magnetic poles, it gets deflected by a fixed amount toward one pole or the other. This shows that the electron’s spin is a quantity that can have only one of two values: “up” for an electron deflected toward the north pole, and “down” for an electron deflected toward the south pole.

Imagine an electron passing through a region with the north pole directly above it and the south pole directly below. Measuring its deflection will reveal whether the electron’s spin is “up” or “down” along the vertical axis. Now rotate the axis between the magnet poles away from vertical, and measure deflection along this new axis. Again, the electron will always deflect by the same amount toward one of the poles. You’ll always measure a binary spin value — either up or down — along any axis.

It turns out it’s not possible to build any detector that can measure a particle’s spin along multiple axes at the same time. Quantum theory asserts that this property of spin detectors is actually a property of spin itself: If an electron has a definite spin along one axis, its spin along any other axis is undefined.

Armed with this understanding of spin, we can devise a thought experiment that we can use to prove Bell’s theorem. Consider a specific example of an entangled state: a pair of electrons whose total spin is zero, meaning measurements of their spins along any given axis will always yield opposite results. What’s remarkable about this entangled state is that, although the total spin has this definite value along all axes, each electron’s individual spin is indefinite.

Suppose these entangled electrons are separated and transported to distant laboratories, and that teams of scientists in these labs can rotate the magnets of their respective detectors any way they like when performing spin measurements.

When both teams measure along the same axis, they obtain opposite results 100% of the time. But is this evidence of nonlocality? Not necessarily.

Alternatively, Einstein proposed, each pair of electrons could come with an associated set of “hidden variables” specifying the particles’ spins along all axes simultaneously. These hidden variables are absent from the quantum description of the entangled state, but quantum mechanics may not be telling the whole story.

Hidden variable theories can explain why same-axis measurements always yield opposite results without any violation of locality: A measurement of one electron doesn’t affect the other but merely reveals the preexisting value of a hidden variable.

Bell proved that you could rule out local hidden variable theories, and indeed rule out locality altogether, by measuring entangled particles’ spins along different axes.

Suppose, for starters, that one team of scientists happens to rotate its detector relative to the other lab’s by 180 degrees. This is equivalent to swapping its north and south poles, so an “up” result for one electron would never be accompanied by a “down” result for the other. The scientists could also choose to rotate it an in-between amount — 60 degrees, say. Depending on the relative orientation of the magnets in the two labs, the probability of opposite results can range anywhere between 0% and 100%.

Without specifying any particular orientations, suppose that the two teams agree on a set of three possible measurement axes, which we can label A, B and C. For every electron pair, each lab measures the spin of one of the electrons along one of these three axes chosen at random.

Let’s now assume the world is described by a local hidden variable theory, rather than quantum mechanics. In that case, each electron has its own spin value in each of the three directions. That leads to eight possible sets of values for the hidden variables, which we can label in the following way: 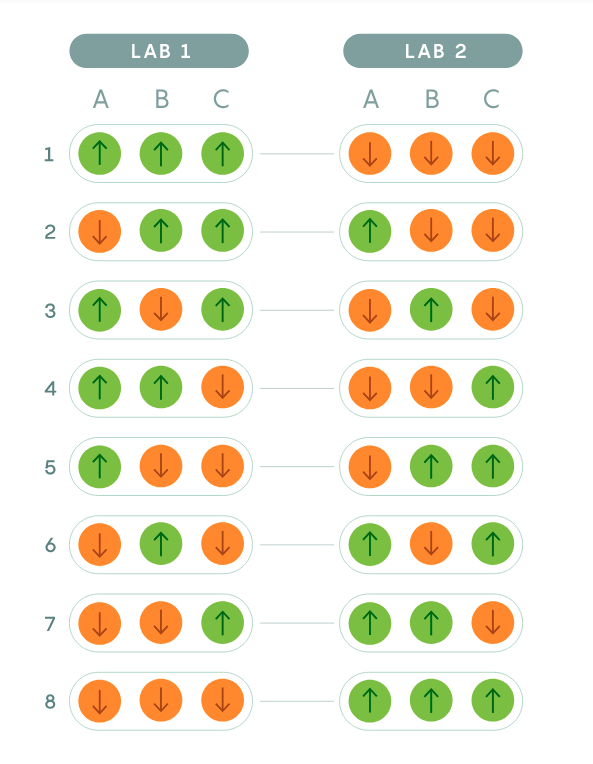 The set of spin values labeled 5, for instance, dictates that the result of a measurement along axis A in the first lab will be “up,” while measurements along axes B and C will be “down”; the second electron’s spin values will be opposite.

Thus the labs will obtain opposite results when measuring along different axes at least 33% of the time; equivalently, they will obtain the same result at most 67% of the time. This result — an upper bound on the correlations allowed by local hidden variable theories — is the inequality at the heart of Bell’s theorem.

Now, what about quantum mechanics? We’re interested in the probability of both labs obtaining the same result when measuring the electrons’ spins along different axes. The equations of quantum theory provide a formula for this probability as a function of the angles between the measurement axes.

According to the formula, when the three axes are all as far apart as possible — that is, all 120 degrees apart, as in the Mercedes logo — both labs will obtain the same result 75% of the time. This exceeds Bell’s upper bound of 67%.

That’s the essence of Bell’s theorem: If locality holds and a measurement of one particle cannot instantly affect the outcome of another measurement far away, then the results in a certain experimental setup can be no more than 67% correlated. If, on the other hand, the fates of entangled particles are inextricably linked even across vast distances, as in quantum mechanics, the results of certain measurements will exhibit stronger correlations.

Since the 1970s, physicists have made increasingly precise experimental tests of Bell’s theorem. Each one has confirmed the strong correlations of quantum mechanics. In the past five years, various loopholes have been closed. Physicists continue to grapple with the implications of Bell’s theorem, but the standard takeaway is that locality — that long-held assumption about physical law — is not a feature of our world.

This article was originally published on QuantaMagazine.org