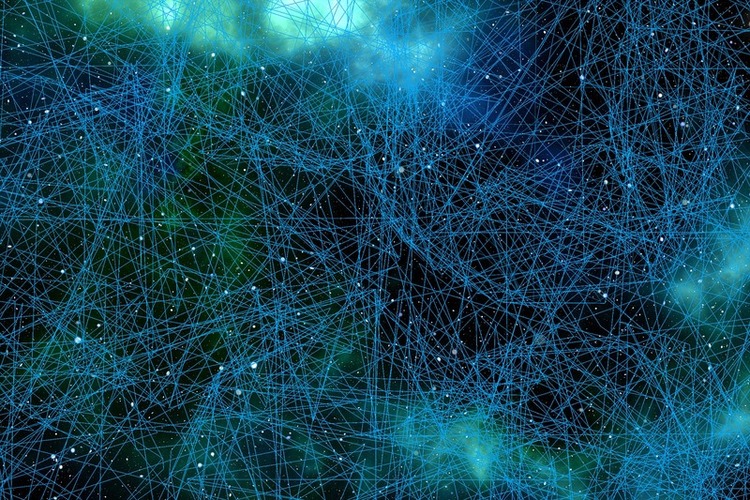 Every generation tends to believe that its views on the nature of reality are either true or quite close to the truth. We are no exception to this: although we know that the ideas of earlier generations were each time supplanted by those of a later one, we still believe that this time we got it right. Our ancestors were naïve and superstitious, but we are objective—or so we tell ourselves. We know that matter/energy, outside and independent of mind, is the fundamental stuff of nature, everything else being derived from it—or do we?

In fact, studies have shown that there is an intimate relationship between the world we perceive and the conceptual categories encoded in the language we speak. We don’t perceive a purely objective world out there, but one subliminally pre-partitioned and pre-interpreted according to culture-bound categories. For instance, “color words in a given language shape human perception of color.” A brain imaging study suggests that language processing areas are directly involved even in the simplest discriminations of basic colors. Moreover, this kind of “categorical perception is a phenomenon that has been reported not only for color, but for other perceptual continua, such as phonemes, musical tones and facial expressions.” In an important sense, we see what our unexamined cultural categories teach us to see, which may help explain why every generation is so confident in their own worldview. Allow me to elaborate.

The conceptual-ladenness of perception isn’t a new insight. Back in 1957, philosopher Owen Barfield wrote:

“I do not perceive any thing with my sense-organs alone.… Thus, I may say, loosely, that I ‘hear a thrush singing.’ But in strict truth all that I ever merely ‘hear’—all that I ever hear simply by virtue of having ears—is sound. When I ‘hear a thrush singing,’ I am hearing … with all sorts of other things like mental habits, memory, imagination, feeling and … will.” (Saving the Appearances)

As argued by philosopher Thomas Kuhn in his book The Structure of Scientific Revolutions, science itself falls prey to this inherent subjectivity of perception. Defining a “paradigm” as an “implicit body of intertwined theoretical and methodological belief,” he wrote:

“something like a paradigm is prerequisite to perception itself. What a man sees depends both upon what he looks at and also upon what his previous visual-conceptual experience has taught him to see. In the absence of such training there can only be, in William James’s phrase, ‘a bloomin’ buzzin’ confusion.’”

Hence, because we perceive and experiment on things and events partly defined by an implicit paradigm, these things and events tend to confirm, by construction, the paradigm. No wonder then that we are so confident today that nature consists of arrangements of matter/energy outside and independent of mind.

Yet, as Kuhn pointed out, when enough “anomalies”—empirically undeniable observations that cannot be accommodated by the reigning belief system—accumulate over time and reach critical mass, paradigms change. We may be close to one such a defining moment today, as an increasing body of evidence from quantum mechanics (QM) renders the current paradigm untenable.

The problem is that, according to QM, the outcome of an observation can depend on the way another, separate but simultaneous, observation is performed. This happens with so-called “quantum entanglement” and it contradicts the current paradigm in an important sense, as discussed above. Although Einstein argued in 1935 that the contradiction arose merely because QM is incomplete, John Bell proved mathematically, in 1964, that the predictions of QM regarding entanglement cannot be accounted for by Einstein’s alleged incompleteness.

So to salvage the current paradigm there is an important sense in which one has to reject the predictions of QM regarding entanglement. Yet, since Alain Aspect’s seminal experiments in 1981–82, these predictions have been repeatedly confirmed, with potential experimental loopholes closed one by one. 1998 was a particularly fruitful year, with two remarkable experiments performed in Switzerland and Austria. In 2011 and 2015, new experiments again challenged non-contextuality. Commenting on this, physicist Anton Zeilinger has been quoted as saying that “there is no sense in assuming that what we do not measure [that is, observe] about a system has [an independent] reality.” Finally, Dutch researchers successfully performed a test closing all remaining potential loopholes, which was considered by Nature the “toughest test yet.”

The only alternative left for those holding on to the current paradigm is to postulate some form of non-locality: nature must have—or so they speculate—observation-independent hidden properties, entirely missed by QM, which are “smeared out” across spacetime. It is this allegedly omnipresent, invisible but objective background that supposedly orchestrates entanglement from “behind the scenes.”

It turns out, however, that some predictions of QM are incompatible with non-contextuality even for a large and important class of non-local theories. Experimental results reported in 2007 and 2010 have confirmed these predictions. To reconcile these results with the current paradigm would require a profoundly counterintuitive redefinition of what we call “objectivity.” And since contemporary culture has come to associate objectivity with reality itself, the science press felt compelled to report on this by pronouncing, “Quantum physics says goodbye to reality.”

The tension between the anomalies and the current paradigm can only be tolerated by ignoring the anomalies. This has been possible so far because the anomalies are only observed in laboratories. Yet we know that they are there, for their existence has been confirmed beyond reasonable doubt. Therefore, when we believe that we see objects and events outside and independent of mind, we are wrong in at least some essential sense. A new paradigm is needed to accommodate and make sense of the anomalies; one wherein mind itself is understood to be the essence—cognitively but also physically—of what we perceive when we look at the world around ourselves.

Bernardo Kastrup has a Ph.D. in computer engineering from Eindhoven University of Technology and specializations in artificial intelligence and reconfigurable computing. He has worked as a scientist in some of the world’s foremost research laboratories, including the European Organization for Nuclear Research (CERN) and the Philips Research Laboratories. He has authored many science and philosophy papers, as well as several philosophy books. His three most recent books are: “More Than Allegory,” “Brief Peeks Beyond” and “Why Materialism Is Baloney.”

This article was originally published in Scientific American Blog.