Science and Nonduality are One

“Separation or Unity, solving or dissolving – this seems to be the fundamental difference between Science and Nonduality. It is however also what they fundamentally have in common.”

Once upon a time ... Many Tales start like this. The word “Once” is sort of an adverb derived from the word “One”. Once upon a time immediately conveys a timeless and spacious environment, and the reader or listener becomes very receptive of anything that follows, with an open mind that is willing to think outside the box of dimensions. So, let’s try this little trick here as well:

Once upon a time there was only clear thinking.

Then thinking fell apart, in Sciences and Philosophy. And even later these fell apart in many schools and specializations. Clear thinking suffered. 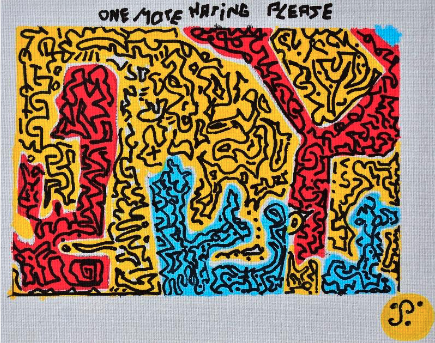 Western Science looked at the picture of the universe and became obsessed with the little cracks it thought were visible on close inspection. They looked like the craquelure that can only be seen when we look at old paintings from too close a distance. Or the strange lines of division in some modern Art, like the Haring-inspired contraption you can see inserted here which I created myself in one of Debbie’s Art classes some years ago[1]. Doing so, Science perceived the Universe as a puzzle that should be taken apart in all of its pieces. After all, the dividing lines were clearly visible, weren’t they?

After it thus separated all the phenomena it thought were visible for the separating mind, it tried to put the puzzle back together. Scientists have since been, and are still looking for the best glue with which this should be done. So far they have thought of glues that come in bottles with strange names, like “Mechanical Force Glue”, “Relativity Glue” (this one even comes in a “general” and in a “special” bottle, depending on how much gravity it contains),“Quantum Mechanics Glue”, “Snares Glue” or even weirder stuff that almost no one understands how to handle.

None of these glues so far have been able to put the entire puzzle together again. Some major pieces have been sort of connected, called the pieces of Time and Space, of Energy and Matter and of Particles and Waves, but many others still don't fit to these, or to each other. And the harder they try, the more pieces they find. They even had found little pieces of glue, called“gluons” that seemed to have some function in holding together the so-called “quarks” in the stickiness of Nature. Well, it has become quite a comic theatre of glues.

After René Descartes, most Western Philosophies and later psychology, embraced this method of separation as well, dividing thoughts, emotions, feelings and perceptions and attributing these to the experience of “Being”. They are still working out the mechanisms of how these experiences fit together and produce what they call "our consciousness”. Not much progress has been made so far, if any. Some even proclaimed that “consciousness” doesn’t exist, or is not important enough to look into. Wow

Most Eastern Philosophies, prominently Hindu, Daoism, Buddhism and Sufism have not come so close to the picture of the Universe, for they instinctively knew that phenomena of such boundless and timeless nature should be observed from afar, in choiceless awareness, to not lose the grand and magnificent overview they felt as Divine. They knew that the craquelure that Science and other Philosophies proclaimed to see, were only illusions that were caused by having the wrong perspective. They observed only Wholeness and concluded that All is One, or at least Not Two (nondualism). They managed to not only experience this Oneness conceptually but formulated pointers to realize Oneness in themselves by pulling the separating mind, whenever it seemed to assert itself, back into the source of consciousness again, which is Awareness or Wholeness itself. This produced the reality of nonduality

The Philosophies of Judaism, Christianity and Islam, although in the source nondual[2] as well, when they presented as institutionalized religions fell apart in complicated dualities and holy trinities, which they tried to glue together with dogma’s and rituals.

Great Philosophers like the Buddha and Jesus, and later poets, musicians, painters, and sages like Chuang Tzu, Rumi, Hafez, Meister Eckhart, Angelus Silesius, Shankara, Ramana Maharshi, Nisargadatta, Paul Klee, Rainer Maria Rilke, and Frederic Mompou experienced this nonduality directly and tried to tell the world about it in their scriptures, talks, poems, musical compositions, drawings, and paintings. With a few exceptions, their audiences however did not pay attention well or long enough for the message to be conveyed properly, and they perceived these teachings as beautiful, but not as a realization for themselves. This is mostly because they listened and looked with the separating mind, not with the unifying Heart.

These phenomena were always One from the start, and the process of (dis)solving would not have been necessary at all if it were not for the separating mind, which created the illusion of the craquelure in which these phenomena seemed not One. We might as well (or even better)have left everything together, as I tried to convey in the aquarelle you can see here, writing in water and proceeding with care. A single leaf is what we see if we zoom in too much on the phenomenon we call a Tree. But it is to no avail, for if we look carefully, we again see the entire basic structure of the Tree, represented in the nerves of the single leaf. And this process repeats itself ad infinitum in many natural structures alike. Separation always points to Oneness.

Separation or Unity, solving or dissolving – this seems to be the fundamental difference between Science and Nonduality. It is however also what they fundamentally have in common.

So, is it just a matter of choice? Yes and no. Science and Nonduality seem to be separate ways to explore the Universe[4]. In the end, however, they arrive at the same vanishing point: Oneness. So, calling this a real choice is a bit deceiving. When we take the route of nonduality, we gain realization. When we take the road of Science, for a long time we only collect a lot of knowledge, but so far this consists of no more than ever increasingly complicated descriptions of what we see and experience, but not a real understanding about the nature of it. Mankind has been doing this now for a couple of centuries, and it presents itself in ever-increasing clarity as an endless road to Oneness. Along the way, it produces a lot of collateral damage, in the forms of inventions, industrialization, and mechanization that seemed a good idea to improve our comfort and health, but increasingly devastated our environment and nature itself. Life is not so much about speed, comfort, and longevity, it is much more about being a feature of nature in every moment.

Therefore, Science and Nonduality should not deny each other, they are One. Oneness is notequal to sameness however. Nonduality is the short and easy way from afar, which is selfevident. Science is the long and difficult way from up close, that needs constant proof. Butboth aim to declare the same. Working together, all the phenomena as and in which theUniverse seems to present itself to itself through us, will then much more easily and muchsooner be understood and even realized, not as separate parts, but as emanations of the sameOneness.

1. More of the results I produced after Debbie’s teachings can be viewed in Paul’s Attic on our website.

2. See about the original Oneness in Christianity the books and talks of Marshall Davis.

3. There are many interpretations, which are as different versions, of the same Glue of Quantum Mechanics. Fourglues are serious. The currently most used glue is the Copenhagen Glue. Besides this, there are bottles of glue named The Many Worlds Glue, The Hidden Variables Glue, and the Spontaneous Collapse Glue (which, as a glue, is not a good name for marketing I would think). There are many more rare bottles of glue developed as well, that sometimes are mixtures of the four main glues in some sort of ratio. Read more here. The Copenhagen Gluebecame popular because is contained ingredients that most scientist were familiar with, and therefore it was deemed to be likely most safe and successful in marketing. Warning: if you want to use the Copenhagen Glue, read a manual first here.

4. As I pointed out and showed in earlier Tales, like “Everything is Wholeness“ on this website, also Art is a very successful way of realizing the Oneness of the Universe. True Artists create when they are “in the flow”, which is the“De” in the Dao De Jing.

Listen to the Listening

It is very important not to focus on perception

My Prayer for a Beautiful World in Distress

One good way to understand religion is to break it apart

A freer way of understanding is to grasp what we’ve been asked to know and hold it for a moment at a distance.

The SANDs of Time Flow Through Space Arrive as Knowledge

Consciousness is not a thing. Asking “What is consciousness?” is like asking “Where does light come from?”, while watching a movie.