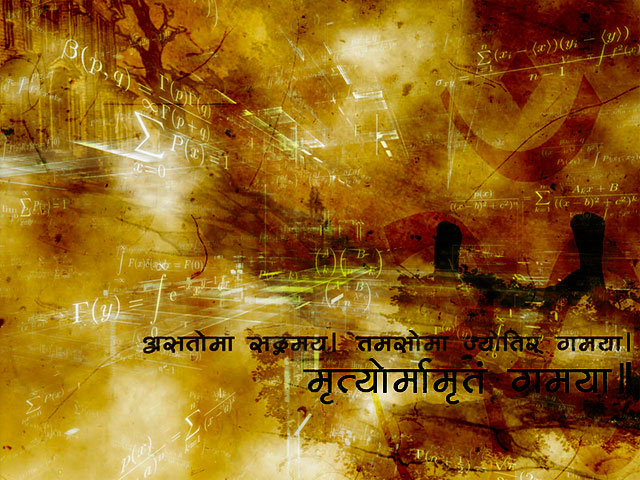 We saw earlier that de Broglie, the French physicist, asserted that matter is both a wave and a particle. There was no clear explanation is to why this is so. Neither was any explanation offered as to the logical interaction between the wave and particle.

After understanding the seed, subtle and gross aspects of the universe from Vedanta, I think we are ready to answer the questions raised by the de Broglie hypothesis. The waveform of matter belongs to the subtle universe and the particle form of matter belongs to the gross universe. They both represent the same thing. Every living and nonliving physical object in this universe exists as a wave and as a particle. Vedanta teaches us that there is the fully functioning subtle universe where the different waveforms interact with each other to form complex waveforms. For example, the JPEG file for an image is in a subtle form, while the actual image you see on your on computer is the gross version of the JPEG file. This is a good way to understand the connection between the subtle and gross universes. The subtle universe creates the gross universe. The subtle universe operates within the individual and cosmic minds. We saw earlier that Maya Shakti converts the subtle waves to gross objects.

In conclusion, we may say that de Broglie proved the existence of the duality of physical objects in the Universe in the form of waves and particles. Vedanta completely agrees with this fact,
but it fills in the blanks by explaining the relationship between the ‘wave’ universe and ‘particle’
universe.

With this understanding, let us see if we can answer the questions which were raised earlier in the overview of the Schrodinger Wave Equation.

The other question which needs to be answered is, what is meant by collapsing of the wave? Science suggests that when the wave changes from a ‘wave’ to a ‘particle’, the wave collapses. As we have seen earlier, Vedanta has a 2 step process:
- Vrtti Vyapti
- Phala Vyapti

The only conclusion from all these answers is that Schrodinger’s Wave Equation represents the wave functions operating within the mind. In this regard both quantum physics and Vedanta are exactly the same.

We saw earlier, when the Time waveform combines with the waveform of any object, for example, the Sun, they will form a superimposed wave function of the Sun and Time. This combined waveform will have the potential timeline of the Sun. It will have the potential of the sun as of now, the sun which is 8 min old, and the sun as it was at its birth 4.6 billion years ago. The entire history of the sun is available in its potential form.

The impression you get from quantum physics is that a wave collapses only once in this universe and all the other waves are collapsed in multiple universes. There is an inexplicability and mysteriousness here. This is a wrong impression created by quantum physics. We have shown that each individual person creates their own unique universe. If 100 people are looking at the same Sun, 100 parallel universes are being created, each with a unique view of the sun. If 1 million people are looking at the same exploding star, then 1 million parallel universes are being created.

This is correct understanding of what Multiple Universes means.

Science tells us that the laws which operate in the classical world do not work in the quantum world and laws which operate in the quantum world do not work in the classical world. From this statement, it would seem both of them are functioning in different worlds. Why does this happen? What is the difference between these two worlds? According to Vedanta, there is a fully functioning subtle universe and a fully functioning gross universe. We saw earlier that the subtle universe is made up of ‘vrittis’ or waveforms operating with the individual mind and the cosmic mind. The gross universe is the universe which is made of ‘memory’ objects. In the gross or physical universe you only find ‘memory’ objects, you will not find any ‘now’ objects.

De Broglie had posited that any physical object has the wave/particle duality. It is both a wave and also a particle. This is exactly the same as the subtle/gross duality referred to in Vedanta. The subtle body, which is the mind is nothing but a pool of waves, while the gross body is the physical universe. Even Schrodinger’s wave equation is really talking about ‘vrittis’ or waves in the mind. The only place you can have waves is in the mind, there are no waves in the physical universe. The observing system which collapses the Schrodinger probability wave function is nothing but Atma, which is the underlying reality of everyone. All the waves in the mind collapse in the presence of Atma. From this we can conclude that Quantum Physics and Vedanta are talking about the same underlying reality.

A Spiral of Inclusion

The Gentle Art of Blessing

Gentleness is a state of consciousness.

How to Choose Your Teaching

"There are so many teachings on the internet today – How am I to choose?"

This Beautiful Drowning: Returning to the Ocean of Is-ness

How can a fish become aware that it swims in that which it seeks?

Transcendence Through Compassion - SAND19 US

A New Opening in the Heart

To watch a show with the Hridaya, the open mind, the open heart, can bring us closer to truth than yoga

SAND18 US — Appreciating the Human

There is no awakening without humans

Axions Would Solve a Major Problem in Physics

In a new paper, physicists argue that axions could explain why the universe isn’t empty

Consciousness is Intrinsic in the Universe

It’s easy, during our everyday life in the world, to forget how extravagantly remarkable a human being actually is.

Beyond the River of This World

Performing at the opening night of the 2019 SAND gathering in Italy, Parvathy Baul sings and dances

Goddess Worship Is The Path to Bliss

SAND18 US - Living Nonduality in a Dualistic World

Is it possible to live a life of activity while holding the perception of unity and fulfillment?

The Essence of Nonduality - SAND19 US

Rupert explores the perennial, non-dual understanding that lies at the heart of all the great religious and spiritual traditions

The Cult of Dyonisus & His Radically Ambiguous Followers

SAND18 US - Trauma and the Unbound Body

Nonduality and Healing from Trauma - The Realization Process

SAND18 US — Silence and Substratum

The Essence of Nonduality - SAND19 US

Rupert explores the perennial, non-dual understanding that lies at the heart of all the great religious and spiritual traditions

To think of the human stage as simply for enlightenment shortchanges the potential of humanity.