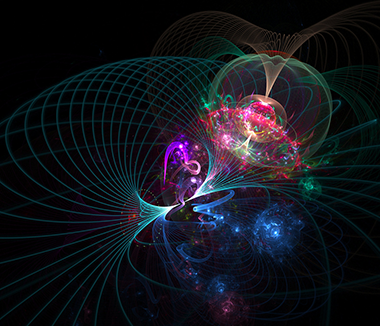 At SAND14 in San Jose, California, Quantum Physicist John Hagelin spoke about the theory that entangled particles are connected through wormholes – the rabbit hole of physics, providing a physical link to enable instantaneous tunneling through space. Let’s take a closer look at that perspective.

A wormhole, officially known as an Einstein–Rosen bridge, is any structure connecting two regions or areas otherwise distant or unrelated. It is a hypothetical topological feature of spacetime, fundamentally a shortcut through spacetime. A wormhole is much like a tunnel with two ends, each with separate points in spacetime.  In principle, two widely separated black holes can be connected to each other and look like trumpet horns making shortcut through spacetime.

Try to visualize space as a two-dimensional (2D) surface. In this way, a wormhole can be pictured as a surface that leads into a 3D tube (the inside surface of a cylinder). The tube then re-emerges at another location on the 2D surface with a similar entrance hole. The actual wormhole would be equivalent to this, but with the spatial dimensions plus one. For example, instead of circular holes in a 2D plane, the two wormhole`s mouths could actually be spheres in 3D space.

Wormholes have long been discussed as a possible mode of interstellar travel and even of time travel. The recently released movie Interstellar is greatly inspired by this phenomenon. They are also fairly well-popularized by science fiction, especially Star Trek: Deep Space Nine, which depicts a large traversible wormhole that allows the characters to travel from familiar regions of space to a distant and unrelated area on the other side of the galaxy.

Wormholes and quantum entanglement
Two quantum-entangled particles always instantly adopt correlated values, no matter how much distance separates them. If a quantum-entangled pair is depicted as a pair of twins, as one twin is raising the right hand, the other invariably and simultaneously raises the left hand. Being able to explain this phenomenon through the wormhole connection, reduces the spookiness Einstein referred to when he talked about entanglement.

Juan Maldacena, theorist at the Institute for Advanced Study in Princeton, New Jersey, and Leonard Susskind, theorist at Stanford University in Palo Alto, California, have observed the entanglement of quantum states of two black holes - and pulling the black holes apart. When that happens, they argued, a bona fide wormhole forms between the two black holes. According to Maldacena and Susskind, it could also be possible to create a wormhole connection between two ordinary quantum particles such as quarks that make up protons and neutrons.

Julian Sonner of the Massachusetts Institute of Technology in Cambridge builds upon Karch’s and Jensen’s work. He observed that a quark-antiquark pair popping up produces a strong electric field which then sends it to the oppositely charged particles accelerating in opposite directions. Sonner also found that the entangled particles in the 3D world are connected with wormholes in the 4D world.

To arrive at this result, Jensen, Karch and Sonner use the so-called holographic principle, a concept invented by Maldacena stating that a quantum theory with gravity in a given space is equivalent to a quantum theory without gravity in a space with one less dimension that makes up the original space’s boundary. In other words, black holes inside 4D space and a wormhole between them are mathematically equivalent to their holographic projections existing on the boundary in 3D. These projections are essentially elementary particles that function according to the laws of quantum mechanics, without gravity and a string connecting them. The wormhole and the entangled pair don’t live in the same space, but mathematically they are equivalent.

Susskind and Maldacena argued that the original quantum particles reside in a space without gravity. In a simplified gravity-free 3D model of our world, there can’t be any black holes or wormholes. Susskind adds that the connection between a wormhole and entanglement in a higher dimensional space is a mere mathematical analogy. The wormhole and entanglement equivalence only makes sense in a theory with gravity.

However, Karch and his colleagues said that their calculations are an important first step toward verifying Maldacena and Susskind’s theory. Their toy model without gravity gives a concrete realization of the idea that wormhole geometry and entanglement can be different manifestations of the same physical reality.