“May your life be guided by curiosity and a passion to see the world with fresh eyes.”

Post Personalism is an art movement that transcends egocentricity and is based in the awareness that the artist and creativity are something the whole universe is doing.

In the Post Personal Project, Patrick Howe uses the lens of Post Personalism through which to view the issues and problems of self-centricity, which he believes is at the root of all social, political and individual problems.

Poet T.S. Eliot said, ‘True poetry is not the expression of personality, but an escape from personality.’

Likewise, the Post Personal Project is not about personality, but coming from a deeper place than personality alone.

Personality comes from the word ‘persona’, which means mask or our outer appearance. Post Personalism looks behind the mask and brings attention to the authentic, beautiful being that is our true identity.

Einstein said, “The true value of a human being can be found in the degree to which he or she has attained liberation from the self.” Therefore, the Post Personalist artist asks how does an artist become liberated in order to become of truer artistic value?

Liberation From the Self

Post Personalism embodies the notion that an artist is not an isolated entity separated from the environment, others, or him or herself. It holds the notion that artistic creativity is aligned with, one with, the same creativity that has created all forms of life. The Post Personalist artist aspires to participate in that higher evolutionary order.

Post Personalism attempts to bring together their like-minded philosophies even though they lived in different times, cultures and created diverse forms of art. The timeless philosophical thread they shared was a sense that they were a part of something larger than themselves; they were part of a universal order that in some way was expressed through them and their artwork.

Astrophysicist Carl Sagan expressed it this way, “If you wish to make an apple pie from scratch, you must first make a universe,” suggesting that the apparent intelligence of the universe expresses itself even in the making of an apple pie. The word “apple pie” could easily be replaced with the word “art”.

While the styles of these great artists are wonderful, it is the universality of their artistic philosophies that has appeal to the Post Personalist. That universality was frequently expressed through their artwork. Furthermore, each artist aspired to transcend the conventional human conditioning of their day and to communicate that effort through their art. However, the Post Personalist does not wish to emulate or copy the styles of artists of the past but to further their perennial universal philosophical aspirations in the present.

Post Personalism shares no direct comparison to Surrealism; however, a sideways comparison can offer an insight into understanding the Post Personalist approach. Surrealism was inspired by developments in human psychology in the 1920s. The Surrealists communicated in their art what they believed to be the appearance of the human subconscious. They made works that resembled the illogical distortions of the dream state.

While both Surrealism and Post Personal ideas bring artistic attention to different aspects of human consciousness, the Surrealists had a clearly identifiable style. They had dripping clocks and so forth. The Post Personalist, however, is not necessarily style oriented. It is only content oriented, which means there may never be a uniquely Post Personal style because any artist could potentially express Post Personal concepts through whatever style was suitable.

In the Post Personal Project exhibitions, Patrick Howe uses the lens of Post Personalism through which to focus on the issues of human identity, such as self-centricity, which he believes lies at the root of all social, political and individual problems.

The chart below illustrates the stages of personal liberation throughout history. It is a broad generalization and there are exceptions to the rule. Nevertheless, the chart illustrates in broad strokes the evolution of the Post Personal perspective when applied to history. 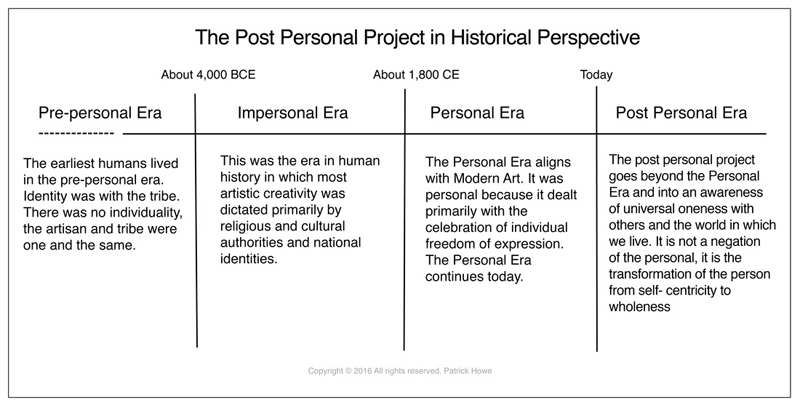 Clinical bipolar disorder, or manic depression, is a mental illness. Its symptoms include extreme high and low mood swings. Feelings of ecstatic self-worth quickly dissolve into self-loathing. It is a disease that requires specialized medical attention.

For so-called normal people, swings in feelings of self-worth are not caused by a disease. When examined closely we see they are caused by our mentally held opinions. It is our opinions about our self-worth that make us feel lesser or greater than others.

The Post Personal Project does not take opinions about itself and others too seriously. This flexibility and openness frees us to enjoy being. When we are simply being, without attachment to our opinions, there is no need for high or low self-esteem. Your worth is already inherent within you. You are not greater or lesser. You are perfect exactly as you are.

With this in mind, a Post Personal artist might ask: how would I create an artwork series that communicates the perfection that is hidden within apparent imperfection.

However, from a Freudian point of view, that particular use of the word ego is incorrect. According to Sigmund Freud (1856–1939) the human mind is divided into three compartments—the Id, the Ego and the Super Ego. Freud believed that the Id is the reptilian part of the human brain, which instinctively desires to procreate and survive for itself regardless of others. The Super Ego, on the other hand, is formed by familial, societal and cultural conditioning that creates social order. The Ego, according to Freud, operates just below the conscious level of awareness. Its job is to moderate, or negotiate, the opposing forces of the Id and the Super Ego in order for a human being to function as a normal, law-abiding member of society.

Post Personalism does not define other people or their behavior by the compartments of their psychological makeup. It focuses instead on the beingness of oneself and others. To a Post Personalist, the ego, great or small, is not a bad thing, it’s an obsolete thing.

In Eastern philosophical terms, the ego is the unobserved mind. The unobserved mind is when thoughts and feelings happen without the person being aware of them, which in turn motivates the mental, emotional and behavioural states of the person. It is the nature of the unobserved mind to form rigid concepts. It also observes others and the environment as separate from itself. On the other hand, the non-egoic person is more aware of what they think and feel and recognizes their essential oneness with others and the environment. Likewise, Post Personalist artists are interested in transcending self-centricity and in exploring art forms through which to communicate that. 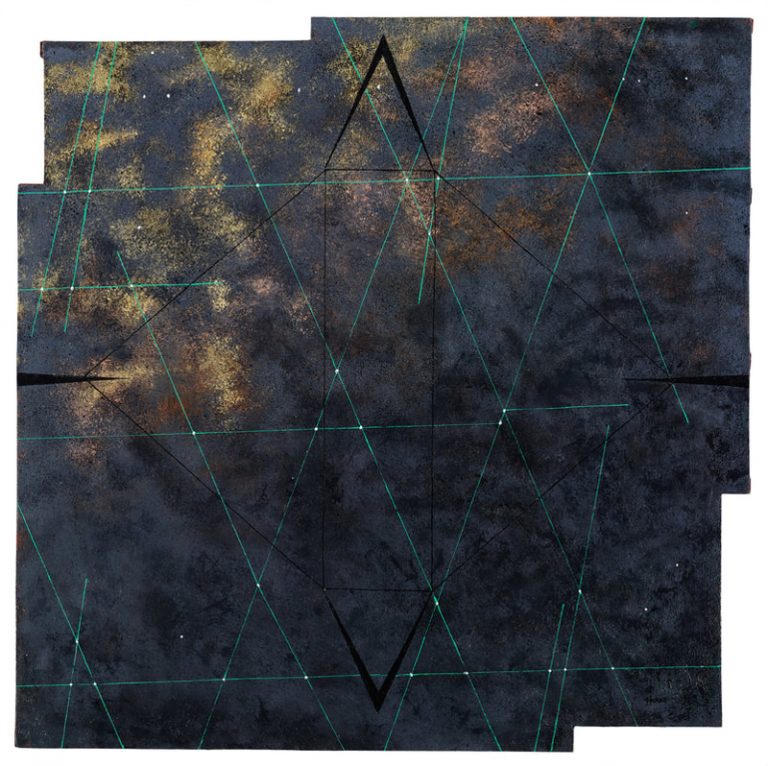 Rational Self Interest was promoted by Russian-born American novelist and philosopher, Ayn Rand (1905–1982). The theory of Rational Self Interest states that if a person takes action on what is believed to be right and true for oneself alone, regardless of others, they will have the greatest possibility of personal material success and happiness.

It is possible that Rational Self Interest may have served a purpose in simpler times when societies needed to be built by the brute force of egoic kings, emperors and uncompassionate capitalists but times have changed. Brute force is no longer needed. The next step in human evolution requires the tools and strategies of compassion.

Furthermore, the problem with Rational Self Interest is that it has never proven to produce lasting success and happiness for anyone as it claims. It is apparently called “Rational” Self Interest in order to make self-centeredness appear rational, reasonable, practical and good for everyone. But in reality, when examined closely, it is merely an intellectual attempt to justify the existence of the ego, which sees others and the environment as separate from itself and as objects; merely resources for the consumption of the ego’s self-interest. Post Personalism is the opposite. Its so-called self-interest is oneness, which is true self-interest. And the true self-interest of one is always in the true self-interest of others.

Collectivism is the notion that a group of human beings is more capable of producing truer or more rational solutions than a single individual. The belief is that the sheer numbers of people who think the same makes something right. However, whatever a group of humans do is always a reflection of their collective consciousness. A group of egoic humans would not produce truer or enlightened ideas. It would produce separation and negativity because that is the nature of the ego. Nationalism, or tribalism, is a form of collective thinking or collective ego that has historically produced violence.

On the other hand, the Post Personal Project is about each individual discovering the truth for themselves within. There is no group thinking—no “group soup”. There is no doctrine to believe in. The common thread shared by artists of Post Personalism is their individual passion and experience of egoless oneness, and out of that may arise truly inspired solutions for the betterment of all.

For art to continue evolving toward a deeper or higher state of human consciousness, it must move in the direction of universal oneness. It is true that art today may continue evolving technologically and in style and technique but those lesser forms of evolution alone will not take us deeper into our shared oneness.

Post Personalism is an art movement that transcends egocentric creativity and is based in the awareness that true artistic creativity is an expression of the greater whole.

Post Personalism is a contemporary approach that engages awakened concepts in relation to human identity and artistic creativity.

Post Personalism is an artistic platform that enables an exploration of the evolution of human consciousness through art.

Post Personalism does not promote any doctrine or belief system. Instead, it is based on an open and flexible framework of oneness and seeks to go deeper than the status-quo state of human consciousness today.

Patrick Howe is an artist, author and educator. He was born in Portland, Oregon, in 1951 and has been living in Seattle, Washington, since 1981. His art theory book, The Awakening Artist: Madness and Spiritual Awakening in Art, was nominated for the Robert Motherwell Book Award for outstanding and original thinking on the topic of Modernism in Art. Patrick also owned a successful art gallery in Seattle for 10 years (2004–2014), where he sold his artwork, which had an easy commercial appeal. After the gallery closed, he was able to pursue other artistic concepts, which lead to Post Personalism, founded together with Christopher Gasper. https://www.patrickhowe-postpersonalism.com/

Thanks to Patrick Howe and The Culturium for permission to repost this article.