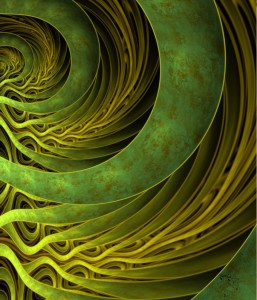 In this article standup philosopher Tim Freke articulates the nature of ‘paralogical’ thinking, which is the foundation of the philosophy and practices he shares to guide people to a ‘deep awake’ state.

The need for paralogical thinking arises from an important insight. Life is profoundly paradoxical. I’ve already mentioned in passing the paradox that on the surface of life we live in a world of separate things, but at the depths all is one. At first such spiritual paradoxes can sound like mystical mumbo jumbo. So I want to ground our discussion of paradox in the empirical discoveries of hardnosed science, before using paralogical thinking to cast new light on the insights of spirituality.

I want to focus on one particular paradox that scientists have found informs reality on a very deep level. When physicists studied the nature of light they discovered something extraordinary. If an experiment is set up one way, light seems to be comprised of elementary particles. But if the experiment is set up in another way, light appears to behave as a wave.

So is light a wave or particles? According to quantum physics it’s both at once. Light can be seen as both a wave and particles, depending on how you look at it. Physicists call this paradox the ‘wave-particle duality’.

This is all very hard to understand, so don’t be surprised if you feel bamboozled. You should be feeling bamboozled, because it is genuinely bamboozling. The Danish scientist Niels Bohr, who was one of the founding fathers of quantum physics, famously remarked:

If you think you can talk about quantum theory without feeling dizzy, you haven’t understood the first thing about it.

THE GLORIOUS BOTH/AND
The quantum physicists found that, on a deep level, reality has to be understood as inherently paradoxical. This has huge implications. It means we can’t think about the deep mysteries of life using normal logic, because normal logic treats paradox as … well … illogical. We need a way of thinking that can embrace paradox. We need to think paralogically.

The great psychologist Carl Jung contrasted what he called the ‘niggardly either/or’ with the ‘glorious both/and’. This is a simple way of differentiating logical and paralogical thinking.

Logical thinking says that light is either a wave or particles. It can’t be both. Paralogical thinking says that light can be both a wave and particles, because life is inherently paradoxical. Niels Bohr explains: There are trivial truths and there are great truths. The opposite of a trivial truth is plainly false. The opposite of a great truth is also true.

Logical thinking is based on the principle that something is either true or it isn’t true, so the opposite of a logical truth is plainly false.

Paralogical thinking is based on the realization that on a deep level life is paradoxical, so the opposite of a paralogical truth is also true.

Paradoxity
Now I need to add one more new idea to our conceptual repertoire, which can help us more easily discuss things paralogically, and that’s the idea of ‘paradoxity’. When we think paralogically we eventually arrive at a paradoxity. We see the paradoxity of something when we understand it from two opposite perspectives at once. For example, the paradoxity of light is that it appears as a wave and as particles, depending on how you set up the experiment.

We reach the conclusion of our logical deliberations when we decide that either this or that is true.

We reach the conclusion of our paralogical deliberations when we grasp the ‘paradoxity’ of the situation, by seeing that opposite perspectives are both true.

I have coined the word ‘paradoxity’ because I want to avoid the confusion caused by different ways of understanding the more familiar word ‘paradox’. From a logical perspective, paradoxes are problems to be solved. But from a paralogical perspective a ‘paradoxity’ is the resolution of a problem.
Paralogical thinking allows us to embrace paradox. Indeed, rather than try and avoid paradoxes, we seek to understand the paradoxity of whatever we are thinking about. Niels Bohr once said:

How wonderful that we have met with a paradox. Now we have some hope of making progress.

Paralogical Vision
I want to suggest a simple analogy to help you understand the value of paralogical thinking. It’s an interesting fact that we look at the world with two eyes, rather than one big eye in the middle of the forehead like a cyclops. The reason for this is that if we had only one eye we’d perceive a flat world. Looking at things with two eyes is what gives us depth perception.

Logical either/or thinking is like looking out of one eye or the other.

Paralogical both/and thinking is like looking out of both eyes.

When we think paralogically we see things from two complementary perspectives at once and this gives depth to our understanding of life.

No, no, you’re not thinking; you’re just being logical.

THE PRIMAL PARADOX
Niels Bohr was a very interesting man. He was one of the most influential scientists of all time and a winner of a Nobel Prize for physics. Yet when he designed his own coat of arms he chose to put on it a spiritual symbol from ancient China. This symbol is commonly known as the yin/yang symbol, but it is properly called the ‘taijitu’, which means ‘diagram of the supreme ultimate’. Now there’s a big claim to live up to!

The taijitu is a symbolic representation of the essential paradoxity of reality. It encodes the ancient Taoist understanding that reality is characterized by the primal polarity of yin and yang, represented by black and white tadpoles. Yin and yang are opposites which paradoxically coexist and complement each other. This is why there’s a dot of white in the black tadpole and vice versa.
Niels Bohr clearly felt the yin/yang symbol captured the paradoxical understanding of reality he had arrived at through his scientific discoveries. And he made this plain, by adding on his coat of arms the Latin motto:

This is an idea that has been important to many of the greatest philosophers, who often referred to it as the coincidentia oppositorum or ‘union of opposites’. The essential idea is that existence is a primal oneness that is arising as complementary opposites. Werner Heisenberg, another of the founding fathers of quantum physicists, puts the primal paradox of existence like this:

Complementary Perspectives
‘Hang on,’ I hear you saying warily. Or perhaps it’s not you? Perhaps it’s my imaginary philosophical sparring partner Rational Richard who wants to take issue with all of this. Clever Dick, as he’s known to his friends, helps keep me on the intellectual straight and narrow by questioning my conceptual flights of fancy.

Tim: Nice to see you Dick … have you popped in for some philosophical chat?

Dick: Yes. What you’ve been saying is worrying me. If we believe contradictory things we’ll end up in a right mess.

Dick: Why do you say that?

Tim: Exactly. Paralogical thinking means understanding reality from opposite points of view that complement each other.

Dick: Well I still think logical thinking is the best way to deal with life. It makes clear sense of things and we’d be lost without it. We need to be more logical, not less logical, in my opinion.

Tim: I agree. Logical thinking is very important. But life is paradoxical so we need two ways of thinking about it.

Dick: What can that possibly mean?!

Tim: You can get what I’m saying by looking at the two forms of physics that scientists use to understand reality. Scientists distinguish ‘Newtonian physics’ and ‘quantum physics’, because they are very different. When dealing with the everyday world, the logical laws of physics discovered by Newton work perfectly. But when we go deeper into the nature of things we need the paradoxical insights of quantum physics, which don’t fit with Newton’s laws at all.

Dick: That’s a paradox I admit.

Tim: In the same way, logical either/or thinking is a very useful tool to help us negotiate the everyday world, but it won’t do if we want to understand the depths of life. For this we need paralogical both/and thinking.

Dick: Well I kind of get it and I’m kind of confused … damn it … now you’ve got me talking in paradoxes!

Tim: Don’t worry. Paralogical thinking will make more sense as we apply it throughout our journey in this book.

THE ESSENTIAL MESSAGE
Let me take you through the essential message of this chapter one more time, because it can be slippery to hold at first.

This means we can’t understand the depths of existence with either/or logical thinking.

We need to use paralogical thinking, which says something can be both this and that, depending on how we look at it.

Paralogical thinking sees reality from two opposite yet complementary perspectives at once, and arrives at an understanding of the ‘paradoxity’ of whatever is being examined.

When we perceive reality with both eyes open we see reality in depth.

This is an extract from philosopher Tim Freke’s latest book THE MYSTERY EXPERIENCE: A Revolutionary Approach to Awakening.
You can download a free eBook of the first part of The Mystery Experience here: www.themysteryexperience.com/ebook/