Painting the Face of Infinity

You can tell by the shoes outside the front door that this is a carefully kept house, but the shoes give no clue to the wonder and mystery waiting inside.
It is a quiet house, on a quiet cul-de-sac in the Springs, on the outskirts of Sonoma, and there is no sign in front with a name or a pronouncement that visions are available here, ineffable experiences transmuted from paint onto canvas and from canvas deep into the heart.
The door opens and an immeasurably calm man with a neatly trimmed white beard, kind eyes and a lilting voice invites you inside. This is Prasanna, and as you step across the threshold into his house you may feel the instantaneous impulse toward silence, and no need whatsoever to speak.
Prasanna will understand, he knows why you are here, and in time he will invite you to sit down and close your eyes in the all-white living room where a larger-than-life portrait of Albert Einstein rests against the far wall. He leaves the room and a few minutes pass before he gently tells you to open your eyes. When you do, Albert is gone and there is a large, square canvas in its place, a faint, pastel mandala, so soft and subtle you have to wait for your eyes to receive it before it shifts slowly into focus like a darkroom print coming to life in a tray of developing fluid.
In the center of the mandala there is a point of light. It pulsates. Like a heartbeat.
Then the rings of the mandala begin to ebb and flow in color intensity as they, too, pulsate. The canvas has come alive. And the less you look at it, the more you simply allow your eyes to receive it, the more intense the changing colors become.
Your logical mind says this is not possible. But your logical mind is in another room somewhere, or down the block. Words are unnecessary. In the thrall of the pulsing mandala, even thoughts evaporate. Slow minutes go by. Or are they hours?
In time you look at Prasanna who is sitting nearby. Perhaps he asks you what you see. Perhaps he just smiles. Some people cry. Some people weep uncontrollably. Some people laugh. Many people have a feeling of deep recognition, a sense of familiarity, of coming home.
There are 15 of these paintings, all different, all the same. Prasanna does not paint them, he says, he waits for them to happen. Sometimes he sits with an empty canvas for months. Waiting.
Art and mystical meaning have been entwined in Prasanna’s soul since birth. Or before. He waited a good part of his life before the 15 paintings came to him, while painting other, more tangible subjects. “Mostly,” he says, “the spirit of nature. As far back as I can remember, I was always painting. It wasn’t my decision to become an artist. It was there.” Painting nature became an involuntary career that led him to the Himalayas in his native India. “I went many times to capture the grandeur, how awesome it is, how serene, how overpowering. All these feelings I want to express in my paintings. Not the particular location. That’s what I did for many, many years.”
And with considerable success, with more than 30 one-man shows in India, in Europe and the U.S. Revealing that success requires Prasanna to explain an important distinction. He was not then, and never has considered himself, a commercial artist. “I didn’t paint for selling,” he explains. “But I was painting, and what I painted sold.”
Behind that painting, within the painting, like a golden filament woven into the canvas that is his life, was a simple, compelling thirst for understanding the meaning of his true self.
“As a young boy I was aware of this aliveness, this consciousness, this living spirit, besides just being a little boy. It was very clear, this spirit that I didn’t know the name for. So there was always the question; what is this? What is aliveness? What is this consciousness? And so then I explored it through many spiritual traditions to find out; what is that?” 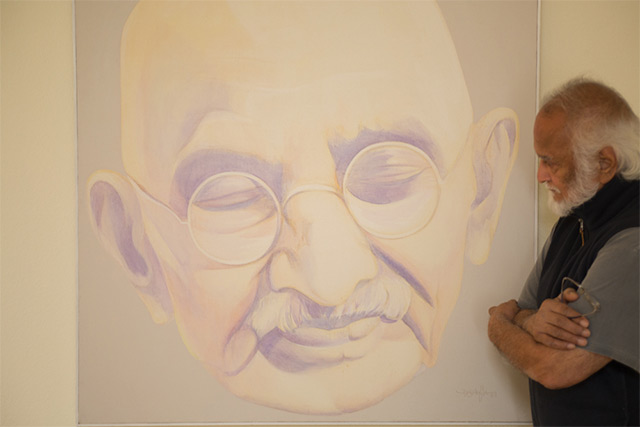 That exploration led him to the teachings of Ramana Maharishi, a Hindu sage, one of the more prominent holy men and spiritual teachers in India, a man considered to be enlightened.
Eventually, Prasanna arrived at his own enlightening moment. “One day, suddenly, through Ramana Maharishi, he made me realize that what you’re looking for is a description of it. But you already are it. I realized my search was for the description, while the reality of this aliveness was already there. And I’m it. With that, the painting and the search were the primary thing in my life as a young person. And the search ended the moment I realized, ‘Oh! What I’m looking for is the description, and no description can match the reality.’ So that was the end of that.”
From that point forward, Prasanna explains, “I knew that this medium of painting can express this aliveness somehow. I didn’t know how, I didn’t try, but that recognition was there.”
The thread of Prasanna’s life led him eventually to California, and finally to Sonoma. And then, what he had been waiting for his whole lifetime, finally happened. In 1992, the waiting was over.
It is essential to understand what Prasanna means when he says each of the 15 paintings “happened.” Because, in his mind, he doesn’t paint them, he is merely the instrument of delivery. This is how he explains it:
“I can talk about it in words … but it doesn’t happen in words. The recognition is there that what I am is a conscious, alive, aware, presence; that is what I am in essence. And when it becomes so palpable, at some point a desire to express it also arises, which is not my personal desire. Then images of how this could be expressed start arising in the heart. Not actually visually, it has no form yet, no shape. But internally it begins to take some form, which is formless yet. And in that, at some point, suddenly some form catches attention and looks like, ‘Oh, this can become a painting.’
“At that point, a brush is picked up and the painting begins. At that time, I don’t have any idea of what it will look like when it is finished, but it is very clear in the heart. … It’s like a pregnant woman. She doesn’t know the face of a child when it’s born, what it will look like, but she knows she’s pregnant. It’s that kind of state.”
All of which, presumably, requires considerable patience.
“Being with it, staying with it, sometimes (takes) many, many months sitting with a blank canvas, and then suddenly some vision arises which says that, ‘Oh, this can express this aliveness, this light that is the light of being, light of consciousness, light of presence.’ When that happens then the brush is picked up and then the rest is just a flow. It just happens.”
There is, Prasanna insists, “no person doing it. Of course, a brush is needed for the process of painting to happen. This body, mind, person is needed to pick up the brush. My contribution is just that. And it begins, and then, at some point, it feels, ‘Okay, this is it. I can’t put a single brushstroke anymore.’ That process is spontaneous and happening on its own.”
Prasanna likens the whole process to a form of meditation. “Not meditation on some object or some thing or some mantra or some breath or some image, but just imageless reality. Focus is on that. You can call it meditation. It’s not meditation that is done, but meditation is just present. That aliveness is conscious and aware of itself.”
Inevitably, people who experience Prasanna’s paintings have the urge to own them. They’re not for sale.
“I’m keeping this series of paintings together,” he says. “I’ve been sharing them for more than 20 years. People have wanted to buy them, have offered some large sums of money for some of them. But if I sell one, it goes into somebody’s house and not many people can see it.”
A public following grew out of Prasanna’s friendship with Father Dunstan Morrissey, a Benedictine hermit who lived at the Sky Farm Hermitage on Norrbom Road and spent much of his life in silence.
“He was the one who saw my first painting,” says Prasanna. “Then he brought some people. Then it so happened that every time a new painting happened he was the first one, somehow, to see it. He knew where these paintings come from, he was a great friend and with whom I can relate. He would bring more people when more paintings happened. Then people who saw them, they started sending their friends, and so that’s how it’s happening. I never asked anyone to come, but still people come. This confirms my understanding that you don’t have to do, life happens.”
Prasanna’s paintings have no names, no explanations. They don’t need them. Among the people who have found their way to Prasanna’s living room was a professor of art appreciation and history, a woman who spent 30 years teaching the meaning and context of art.
“When I put a painting up,” says Prasanna, “she literally started crying. She could not stop. She said, ‘This painting does not need to be taught appreciation.’ And that is the thing, nobody, from all the people who have come here, has asked, ‘What is this?’ There is always some recognition.”
There are 15 paintings in the series. Will there ever be more?
“The series of these paintings, that I was waiting for them to happen, that impulse has satisfied itself. I can’t go anywhere beyond it. All my life as an artist was going toward this. It has been satisfied. Where can I go beyond this? I have gone as far as I can go in giving form to the formless. Beyond that I have to keep quiet, and that’s what is happening nowadays. There’s nothing more I have to say.” 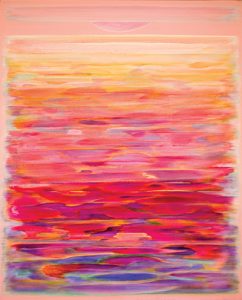 Some of what Prasanna has to say he has committed to the printed page in a series of enchantingly simple and profoundly insightful books, including Freedom From Imagination, TWO The Love Story of ONE, Thirsty Questions, Afterthought and Egopanishad and Isopanishad.
He also expresses the inexpressible in haunting music played on a flute and available on facebook.com/Prasannabooks/.
Access to Prasanna’s art is largely by word of mouth and invitation. Those interested can reach him through the facebook page, and Valley of the Moon magazine will communicate requests to him as well.
But there is a friendly warning offered anyone considering a visit. As Prasanna explains, “Babaji (founder of Sonoma Ashram) used to come here sometimes and when he saw the paintings he would say, ‘I’m useless for the rest of the day.’ And he would tell people, ‘If you want to be useless, go to Prasanna.’”
Prasanna paints and writes at the intersection of the known and the unknown, the unmanifest and the manifest, the point at which literally anything and everything is possible. Sit with his paintings and that begins to be clear. As he writes, “In the ocean of love, there are no separate waves, just the ocean waving.”

Posted with permission from www.vommag.com