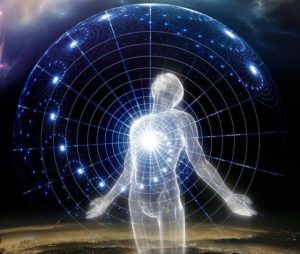 The Copenhagen interpretation of Quantum Mechanics asks us to believe that particle don’t have locations until we measure them.  There is, however, an alternative view, pioneered by Louis de Broglie in 1927 and developed by David Bohm in 1952 which came to be known as Bohmian Mechanics or pilot-wave theory.  It reconciles particles with our usual classical understanding.  The catch: everything in the cosmos influences everything else.  The universe is essentially non-local.

This theory had fallen out of favor after a 1992 paper known as ESSW claimed to deliver it a fatal blow.  Now, a team of seven scientists lead by  Aephraim Steinberg actually carried out the experiment proposed in ESSW and showed that the apparent contradiction disappeared when nonlocality was fully taken into account.  The full story was published in Wired and Quanta Magazine.

If their results hold up to independent scrutiny, Bohm’s theory might be poised for a comeback.  Perhaps it is time to read again the words of this fascinating scientist, who had to flee the US because of his communist sympathies:

I would say that my scientific and philosophical work, my main concern has been with understanding the nature of reality in general and consciousness in particular as a coherent whole, which is never static or complete, but which is in an unending process of movement and unfoldment. Thus, when I look back, I see that even as a child I was fascinated by the puzzle, indeed the mystery, of what is the nature of movement. Whenever one thinks of anything, it seems to be apprehended either as static or as a series of static images. Yet, in the actual experience of movement, one senses an unbroken, undivided process of flow, to which the series of static images in thought is related as a series of ‘still’ photographs might be related to the actuality of a speeding car. 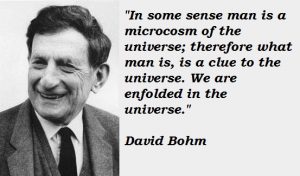 Then there is the further question of what is the relationship of thinking to reality. As careful attention shows, thought itself is in an actual process of movement. That is to say, one can feel a sense of flow in the ‘stream of consciousness’ not dissimilar to the sense of flow in the movement of matter in general. May not thought itself thus be part of reality as a whole? But then, what could it mean for one part of reality to know another, and to what extent would this be possible? Does the content of thought merely give us abstract and simplified ‘snapshots’ of reality, or can it go further, somehow to grasp the very essence of the living movement that we sense in actual experience?

.. one who is similar to Einstein in creativity is not the one who imitates Einstein’s ideas, nor even the one who applies these ideas in new ways, rather, it is the one who learns from Einstein and then goes on to do something original, which is able to assimilate what is valid in Einstein’s work and yet goes beyond this work in qualitatively new ways. So what we have to do with regard to the great wisdom from the whole of the past, both in the East and in the West, is to assimilate it and to go on to new and original perception relevant to our present condition of life.

.. man’s general way of thinking of the totality, i.e. his general world view, is crucial for overall order of the human mind itself. If he thinks of the totality as constituted as independent fragments, then that is how his mind will tend to operate, but if he can include everything coherently and harmoniously in an overall whole that is undivided, unbroken and without border (for every border is a division or break) then his mind will tend to move in a similar way, and from this will flow an orderly action within the whole.

Indeed, man has always been seeking wholeness - mental, physical, social and individual. .. It is instructive to consider the word ‘health’ in English is based on an Anglo-Saxon word ‘hale’ meaning ‘whole’: that is, to be healthy is to be whole. Likewise the English ‘holy’ is based on the same root as ‘whole’. All of this indicates that man has sensed always that wholeness or integrity is an absolute necessity to make life worth living. Yet, over the ages, he has generally lived in fragmentation.

In the prevailing philosophy of the Orient, the immeasurable (i.e. that which cannot be named, described, or understood through any form of reason) is regarded as the primary reality. 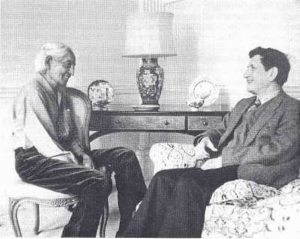 If we supposed that theories gave true knowledge, corresponding to ‘reality as it is’, then we would have to conclude that Newtonian Mechanics was true until around 1900, after which it suddenly became false, while relativity and quantum theory suddenly became the truth. Such an absurd conclusion does not arise, however, if we say that all theories are insights, which are neither true nor false.
... Man is continually developing new forms of insight, which are clear up to a point and then tend to become unclear. In this activity, there is evidently no reason to suppose that there is or will be a final form of insight (corresponding to absolute truth) or even a steady series of approximations to this. Rather, one may expect the unending development of new forms of insight (which will, however assimilate certain key features of the older forms as simplifications, in the way that relativity theory does with Newtonian theory). Our theories are to be regarded primarily as ways of looking at the world as a whole (‘world-views’) rather than as ‘absolute true knowledge of how things are’.

What prevents theoretical insights from going beyond existing limitations and changing to meet new facts is just the belief that theories give true knowledge of reality (which implies, of course, that they never change). Although our modern way of thinking has changed a great deal relative to the ancient one, the two have had one key feature in common: i.e. they are both generally ‘blinkered’ by the notion that theories give true knowledge about ‘reality as it is’. Thus, both are led to confuse the forms and shapes induced in our perceptions by theoretical insight with a reality independent of our thought and way of looking. This confusion is of crucial significance, since it leads us to approach nature, society and the individual in terms of more or less fixed and limited forms of thought, and thus, apparently, to keep on confirming the limitations of these forms of thought in experience.

If man thinks of the totality as constituted of independent fragments, then that is how his mind will tend to operate, but if he can include everything coherently and harmoniously in an overall whole that is undivided, unbroken, and without a border then his mind will tend to move in a similar way, and from this will flow an orderly action within the whole. 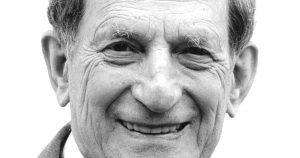 The notion that all these fragments is separately existent is evidently an illusion, and this illusion cannot do other than lead to endless conflict and confusion. Indeed, the attempt to live according to the notion that the fragments are really separate is, in essence, what has led to the growing series of extremely urgent crises that is confronting us today. Thus, as is now well known, this way of life has brought about pollution, destruction of the balance of nature, over-population, world-wide economic and political disorder and the creation of an overall environment that is neither physically nor mentally healthy for most of the people who live in it. Individually there has developed a widespread feeling of helplessness and despair, in the face of what seems to be an overwhelming mass of disparate social forces, going beyond the control and even the comprehension of the human beings who are caught up in it.

How Far is the Edge of the Universe?

If you were to go as far out into space as you can imagine, what would you encounter?