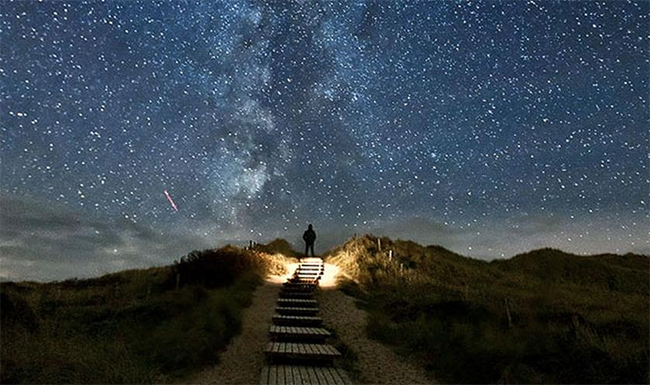 The Mystery of ‘I’ and ‘This’ – The Universe and a Human Being
An extraordinary and profound personal experience illustrates the tenet that the Model of Manifestation describes both the Universe – and a human being.  This notion had been a long-time mind-bender for me.  I have learned since then that it is one of those tenets that are perhaps only properly understood intuitively – or through direct perception – one that is a direct experience in a state that is free of thought.  A solely mental or intellectual understanding might well leave one with only a mind-bending confusion – possibly forever!

That lesson in the value of learning through direct experience occurred during an encounter I had while taking a walk one afternoon in the midst of a spiritual retreat.  This retreat took place years before I had even seriously begun my study of Kashmir Shaivism’s scriptural works – and when the extent of my knowledge about the Model of the Manifestation of the Universe was simply that it existed and that it was an essential aspect of Kashmir Shaivism.  It was some years later that a sudden remembrance of this experience engendered an understanding that straightened out the mind-bender, solving, at least in part, the mystery of how a human being and the Universe can be the same.

But, back to the retreat … In the midst of this contemplative walk, I stopped along the forest path upon which I was walking to allow a meditation master to cross the path in front of me.  As this teacher walked past me, we made eye contact – for how long I have no idea.  But almost immediately, I got the sense that time just …. wasn’t  ....  My physical surroundings, (including the body of the teacher) disappeared.  Her eyes were suddenly open windows upon a startlingly clear and breath-taking reality that just a split second before had not been there, on the other side of that open ‘window’.  So, somehow ‘in’, or ‘through’ this being’s eyes - and ‘somehow’ both from AND within this teacher’s innermost Being – I experienced what I can only describe as the vastness of the Universe.  It was almost as if ‘she’ wasn’t there, anymore – but had turned into that vast expanse and depth of Universe that was on the other side of that open window – yet that expanse somehow (to my ‘feeling sense’) was also her.

It wasn’t that I simply SAW the Universe that was on the other side of that ‘open window’.  I seemed lost in that Universe, as if I WAS that Universe!  There was a seemingly infinite expanse of deep, and eternal ‘space’ in which there were countless stars, planets, galaxies and other celestial bodies, all moving somehow multi-dimensionally.  It was limitless ... I was limitless. I ... was ... this ... Universe.  I…was…This.

While still being that universe in the teacher’s eyes, I felt an extremely miniscule flash of a fleeting notion pass through me – as if I was almost pinching myself to make sure that what I was ‘experiencing/being’ wasn’t just that I was ‘visually seeing this’ as a picture in one of those great special issues of an astronomy magazine.  It was somehow an external seeing, or perception – yet simultaneously an internal seeing - AND BEING’.  It was what I would now call a kind of ‘direct perception’: a ‘knowing’ and a ‘being’, at the same time.  And it had been brought about (at least in part, and initially) by my perception of an object in the seemingly external world – this teacher’s eyes.

Although I did not know it at the time, this was an experience of the Unity of Ultimate Reality described in Kashmir Shaivism – being the universe and a human being at the same time – in a formless form of unity beyond any mentally imaginable experience.  Adequately describing this being-experience in words is virtually impossible.  I guess that’s why it’s taking so many of them!

And as I slowly began to walk away from that encounter with the teacher, the question arose on its own, from deep inside my being – of at first “Who is She?” Then that question morphed into an emphatic “What is She?”

‘I’ and ‘This’ in Retrospect
Some years after having this experience, I had begun serious study of Kashmir Shaivism.  One day as I was contemplating the Manifestation Model in preparation for a talk, seemingly out of nowhere came a sudden flashback to the encounter with that spiritual teacher.  The questions that had arisen back then began to race through my psyche again: the question ‘Who is She?’ that had evolved on its own into ‘What is She?’.  These questions re-arranged themselves with a spontaneous upwelling of a sudden realization, accompanied by more questions:  “Then, this experience still reverberating within me – does it also really mean ‘Who am I?’ and ‘What am I?’  And am ‘I’ and ‘This’ (the Universe in her eyes) one and the same?”

While this internal experience was taking place, I continued to stare at the tattvas (principles or levels of manifestation) at the topmost section of the Manifestation Model.  Suddenly the words ‘I’ and ‘This’ on the page matched themselves up with the words ‘I’ and ‘Who’ - and then ‘I’ and ‘What’ – the words of my internal, spontaneous questions from that Retreat experience.  In the flash of an instant, I understood what they meant – in a way that I had not at the time of the Retreat, and could not have from simply an intellectual way of knowing.  I heard myself say out loud, in utter astonishment: ‘So that’s what that was!’

I experienced a sudden realization, deep in my Being, that in that experience of years ago, I was a coalescence of ‘I’ and ‘This’ into undivided unity.  I was Ultimate Reality, the Supreme Experiencer.  Except ‘I’ had no words for it at the time – ‘I’ was simply the experience of ‘This’.  That pure experience was my identity – and nothing else!

By way of a brief explanation of the format of the outlined Models, the principles of manifestation (also referred to as categories, states of consciousness, and tattvas) are listed in boldface letters on the left, in Sanskrit, with an English translation to the right, where appropriate.

Model of Manifestation of the Universe

Combined pure I-consciousness of Siva and its sentient subjectivity Sakti

Faint traces of objectivity appear in the undivided consciousness of Siva/Shakti.  Consciousness views ‘all that is’ in a state of withdrawal, at one with its own nature.  ‘I’ consciousness predominates over, and encompasses, ‘this’ consciousness in the awareness that: ‘I am this (universe)’.

‘This’ consciousness is dominant over ‘I’ consciousness.  The awareness is ‘This (universe) is me’.  The All is now more clearly manifest as an independent reality, is still experienced as one with consciousness, yet is no longer fully merged within it.

Awareness is two-fold: ‘I am this (universe) and this (universe) is me’.  Subjective and objective aspects share equal status, and Pure knowledge (suddha vidya) emerges. (Adapted from Dyczkowski, 1987.)

Model of Manifestation of the Universe

Neither Transcendent nor Immanent

Realms of Manifestation: Universal and Individual, Pure and Impure

“Impurity is a state of seeming separation from Consciousness” (Dyczkowski, 1987).

At the levels of the ‘Impure Creation’, one experiences a sense of separation from Consciousness, and instead identifies with the physical body and the mind.  That process results in the Limited Individual Experience of the Limited Individual Subject (Purusha).  Subject and object are apparently divided here, as our awareness is focused externally.

As can be seen in Figure 1, Impure Creation is the realm of the mind and various vibrational processes (maya, etc.), which make the Limited Individual Subject bound by time, space and natural law.  For most of us, most of the time, our conscious awareness is typically here, in the objective world – in the realm of the mind, and the lower tattvas of the Individual,Limited Perceiver.

A scholar of Kashmir Shaivism says of the mind: “The ordinary mental calculations of a person - are based on past impressions (about objects) - and constitute the bondage of a worldly being…. People are not (ordinarily) aware of the absolute unity of the Self (Siva, the highest tattvas), existing at the moment of the beginning of a direct perception.”  (Pandit, 2003)  And it is this Self – the plenum of all knowledge - that we access every time we have a perception.

From the Kashmir Shaivism perspective, then, there is more than one source of internally accessible information upon which to base mental calculations. There are the stored past impressions (as in memory) and the infinite plenum of knowledge (the Self) that we access countless times a moment with each perception, yet are unaware of it ordinarily.  These sources of information can also be described as the mind (of the Impure Creation) and the highest tattvas of the Self (of the Pure Creation).

Neuroscience researchers have begun to recognize that there has to be something more that is internally accessible to a person than just memory – but don’t yet know exactly what that is.  As an example, Bruno Olshausen and other neuroscientists have concluded that the model of perception that emphasizes the study of the external visual stimulus solely or primarily is problematic, and that something more than ever thought before must be coming from inside the person in the form not only of memory, but also of some pre-existing information ‘inside’ the subject.  But still unclear is from where inside the subject it’s coming, and how it got there.  Their hypothesis is that the cortex “essentially contains a probabilistic, causal model of the environment, and that sensory information is interpreted and represented in terms of this model” (Olshausen, 2004).

The work of Ronald Rensink on attention corroborates this view with regard to mechanisms involved in change detection, and their involvement in providing the perception of a ‘scene’.  He states: “What you’re experiencing is largely the product of what’s inside your head ... It’s informed by what comes in through your eyes, but it’s not directly reflecting it ... We create something internally and then we check, check, check ... Essentially, we experience the brain’s best guess about what is happening now” (Lawton, 2011).

<< Non-dual Kashmir Shaivism – The Science of Ultimate Reality (Part I)

Thoughts on Addiction and a Contemplative Life

The Big Book of Alcoholics Anonymous says that alcohol is “cunning, baffling and powerful” in its cause of the disease of alcoholism.