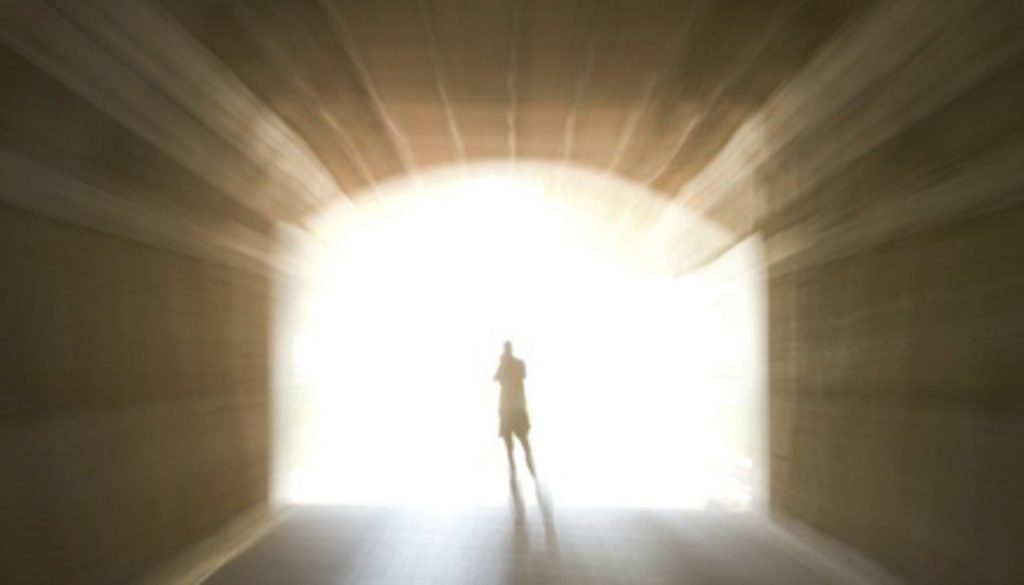 Just as artists are driven to create, scientists need to prove that something is as it seems. Their mantra is, don’t tell me, show me through repeated tests that arrive at the same results every time. Doubt and questions are the comfort food of science, and through peer review research is constantly questioned. Rightfully so, otherwise how would we know what has been put forward is correct? The world is overflowing with pseudoscience, conclusions given without the appropriate research. Peer reviews verify the findings and hold the researcher accountable and separate fact from imaginings.

With that understanding, I would like to dispute some of the scientific conclusions regarding near-death experiences. As with peer reviews, doubters push us to find definitive ways to illustrate the reality of these experiences. The material here attempts to bring information that is verifiable.

Dr. Raymond Moody chose to use the word ‘near’ in his identification of death experiences. Moody is a medical doctor and it makes sense that he would inject this word into his work. Sadly it has inserted many years of uncertainty into the death reports. One man said that the person who named it ‘near-death experiences’ never had one. There is nothing halfway or ‘near’ about it; dying is quite absolute whether we return or not. Another person said that there are no words for the experience because we are talking at a level for which we don’t have a language.

Dr. Wilder Penfield wanted to learn where seizures occurred in the brain of his epileptic patients. While the person was awake, he exposed their brains and probed around to see where their spasms occurred. Unexpectedly, when he nudged the frontal cortex the patients recalled vivid memories of their past.Some skeptics have used this to explain the life review, an element of the death experience.

Dr. Susan Blackmore, a British psychologist, believes these experiences result from cerebral neurons losing blood flow. Dr. Kevin Nelson, at the University of Kentucky agreed with Blackmore and suggested they could result from hallucinations.

Dr. Tom S. Troscianko and Blackmore wrote a paper speculating that the effects of sound on the brain could cause the tunnel. The Doppler Effect talks about the changes in sound when vehicles go by. During the approach, the sound is high, and as it passes the sound instantly changes to lower tones.

Dr. Karl Jensen used the drug ketamine to reproduce one aspect of the death experience. He reported it brought on an OBE (Out of Body Experience). OBEs are an aspect of what is reported at death but cannot be considered a death experience. Those having an OBE are very much alive, and while they are out of their bodies, they remain at the earthly plane. Those having an NDE are dead. Their breathing, heart and organs are no longer working. Ketamine equals the effects provided by magic mushrooms, LSD, DMT, and other hallucinogens.

An article by Charles Q. Choi in Scientific American, September 12, 2011, listed the above explanations and added sleep paralysis and dopamine as causes of the death experiences. Sleep paralysis is a normal state that occurs when we are halfway between sleep and awake. Dopamine has a number of uses in the brain. Here Choi is talking about a natural chemical in the brain that can bring a feeling of euphoria.

To date, these “scientific” attempts to explain the death experience are just theories, yet they are presented as proven facts. What happened to repeated tests to prove their hypothesis, or regard for the peer review that differs from their own? The above explanations talk about a very small part of what happens in the beginning. The total event is considerably more profound and intricate. If all these suppositions were bound together, and proven correct, they would only speak to what happens at the very beginning and only scratch the surface.

To prove the reality of these experiences using science is almost as difficult as catching a thought in flight. But as we will see at the end of this article, it can be done. There has been some amazing work done with remarkable results.

In the past the medical profession had a clear idea of when death occurred. The heart and organs had stopped and that was it. Today it’s not so easy. We now know that the bodily organs break down at different times. The brainstem is the last to stop functioning and has electrical activity from one-half to three-quarters of an hour after the heart stops. What of those being kept alive with machines? Are they alive or dead?

Although I don’t agree with the above explanations, I understand why some peoplehave those ideas. People who die in medical facilities are revived within minutes. There isn’t enough time to judge if the experience resulted from the breaking down of the brain, the medicines the patient was given, a hallucination, or actual death.

Numerous medically recorded deaths show their authenticity but are being ignored by doubters. We refer to deaths that have lasted for hours before they returned to this life. Attempts to revive them were unsuccessful and the body was sent to the morgue, only to return to life many hours later. It is not unusual for people to return while their bodies are in rigor mortis. Rigor mortis takes approximately four hours to begin and another nine or ten for the body to become totally rigid. These cases were medically recorded because the death and return happened within the hospital.

Some returned so rigid and cold that they are unable get the attention of the mortician. One man could hear two men talking beside him. Unable to move and get their attention, he forced his eyes to move and it worked. In another case, a women’s body was being identified by her brother-in-law when she returned. She heard them talking but couldn’t tell them she was alive. Then the relative noticed tears running from her eyes and asked if dead people cried. The mortician jumped into action.

One fully recorded death lasted twenty-nine hours. A sailor was diving and got a poison coral stuck in his foot. His friends got him to medical help, but it was too late. For reasons we don’t understand the doctor on the ship wired the man with an EEG (electroencephalogram) and went away leaving it running. Twenty-nine hours later the patient returned to life with the EEG still attached and running.

These lengthy deaths cannot be the result of drugs, the brain breaking down, or hallucinations.Jeffery Long, MD, outlines nine points of evidence in his book, Evidence of the Afterlife: The Science of Near-Death Experiences. Condensing the list to its main points we see that during operations these people returned with detailed information not possible for them to normally know. None of the essential organs are working, yet they can give details of what was done, who did what, and who came and went from the room. The patients also knew what the medical staff were thinking, and even personal information of the lives of those in the room.

Young children, too young to have been influenced by others, tell of having the same experiences as adults. Dr. P.M.H. Atwater’s research of thousands of small children gives validity to this realization.

Dr. Kenneth Ring researched blind people who had death experiences. He and Sharon Cooper collaborated in the 1991 book Mindsight. Thirty-one blind people who had returned from death were interviewed. In every case, they reported seeing, and described details beyond expectations to prove the point. The same was true for those who were deaf.

One hundred patients who died during heart operations were interviewed by Dr. Michael Sabom, a cardiologist in Atlanta, Georgia. Of those who remembered something during their deaths, sixty-one percent could give detailed descriptions of what happened around the room and the efforts to revive them.

Some return from death with talents and abilities not present before death. With no training they suddenly became musical virtuosos or math wizards. Most return with a marked increase in their intelligence. And, others came back either instantly cured, or they healed at an alarmingly fast rate.

Both NDERF and IANDS are excellent websites that boast a huge selection of well-documented and scientific studies on death experiences, as well as other excellent information offered for serious seekers.

The death experience is a medical condition and does not belong with the paranormal. Evil spirits will not take over our lives. Deceased souls will not attach to unborn babies. And, those who have returned from death have not been taken over by “walk-ins” or other spirits. These stories date back to a time when vampires and the walking dead were thought to be real. It’s time to get real and know fiction from reality. We have an insatiable curiosity and equally great imaginations. It is up to us to know the difference.

What occurs at death? We must understand that no two deaths are alike. One size does not fit everyone any more than one life does. Up to a point, we have an active role in creating the death experience we have, both good and bad. That may seem a bit confusing, but there is a simple explanation.

When we boil everything down, all we actually have are our thoughts, our conscious awareness. We may also have bodies and emotions, but our thoughts dictate the life we will know. It is a well-documented fact that our outlook effects our wellness. Indeed, our thoughts about something dictate our reaction to it. David Chalmers, a highly respected physicist and philosopher, suggests that consciousness is a fundamental element of the universe along with electromagnetism or gravity.

Repeated scientific tests on the brain have found that a signal comes into the brain anywhere from four to ten seconds before what we are going to react. Where are these signals coming from? Are we in some way connected to that Universal Consciousness? Actually, that is exactly what we are discovering.

Death experiences suggests that when we die, we bring with us that same conscious awareness that we enjoy here. It simply continues to do what it’s always done, provide the choices we make.

In place of guesses and supposition, we need a serious, in-depth study, conducted by those who can be impartial and without prejudice. It should include every person who has died and returned, no matter for how long, and whether they remember anything or not. It should include the doubters’ explanations, the length of time their death lasted, what medications they received, what verifiable information they gained. It should also include their mental state before their death and any personality changes.

These are only a few of the aspects needing to be examined. Only after a thorough and serious examination of death has been conducted will we gain a clear understanding of the legitimacy of reports of death experiences.

Lynn K. Russell has researched 2500 death experiences, she is an author, a workshop facilitator and gives talks on the subject. Lynn’s new book, The Wonder of You: What the Near-Death Experience Tells You About Yourself is expected out later this year.