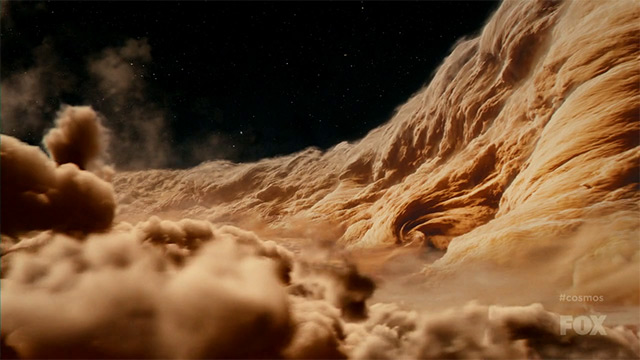 The surface of the Earth is the shore of the cosmic ocean.
On this shore, we’ve learned most of what we know.
Recently, we’ve waded a little way out, maybe ankle-deep, and the water seems inviting.
Some part of our being knows this is where we came from.
We long to return, and we can, because the cosmos is also within us.
We’re made of star stuff. We are a way for the cosmos to know itself.
- Carl Sagan, Cosmos

Traveling above Jupiter at more than 130,000 miles per hour, NASA’s $1 billion Juno probe took its ninth set of stunning flyby images on October 24. But the sun slipped between the giant planet and Earth for more than a week, blocking the spacecraft from beaming home its precious bounty of data.

Now that the conjunction is over, however, new raw image data from Juno’s ninth perijove — as the spacecraft’s high-speed flybys are called — has poured in. Researchers posted it all online on Tuesday, and a community of amateurs and professionals has been busily processing the data to yield colorful and stunning new pictures of Jupiter.

Below are some fresh, close-up images of Jupiter, along with other unbelievable views captured from earlier perijoves.

In the most recent flyby, as with the previous eight, Juno’s flyby started over Jupiter’s north pole. 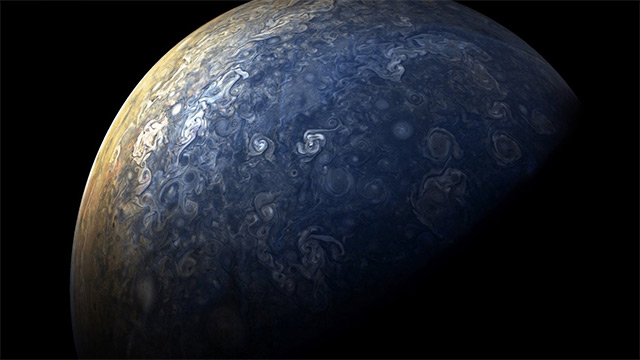 The spacecraft then swept within a few thousand miles of the gas giant, capturing stunning high-resolution views of its cloud tops. 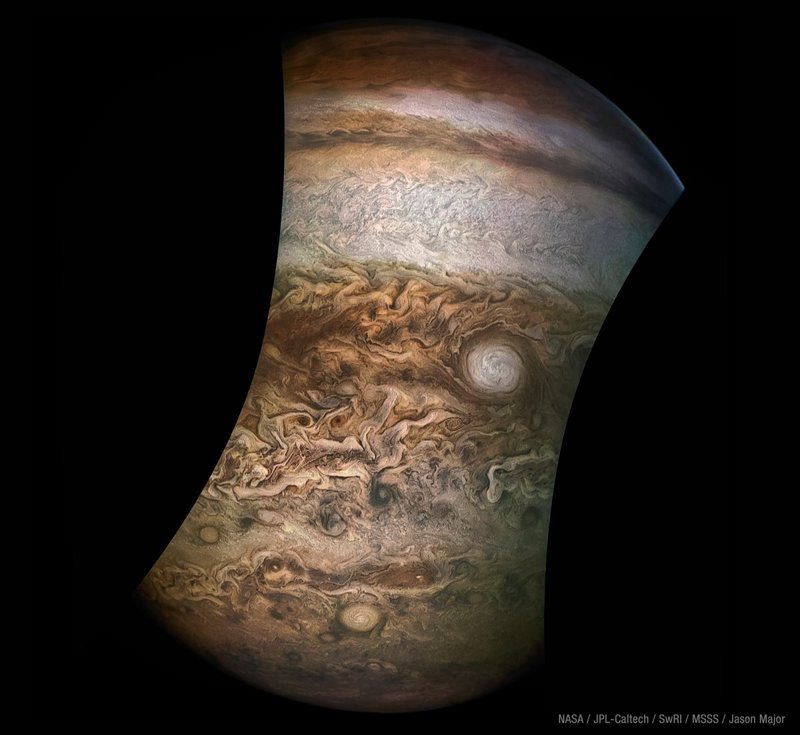 At its closest approach to Jupiter during each flyby, the robot briefly becomes the fastest human-made object in the solar system, reaching speeds of around 130,000 miles per hour.

Then Juno flew back out into deep space, passing over Jupiter’s south pole on its exit. Churning storms at the poles constantly change their appearance. 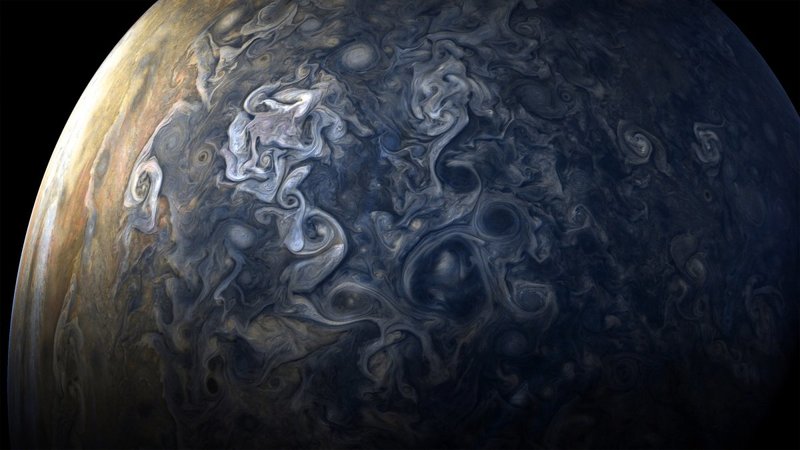 Researchers upload the raw data sent by the probe to the mission’s website.

There, enthusiasts take the drab, mostly gray image data and process it all into true-to-life color photos. 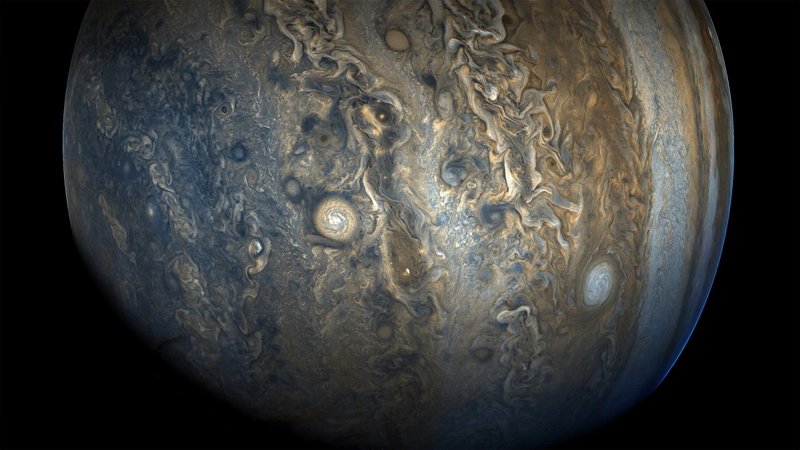 Many snapshots of Jupiter take on an artistic quality. 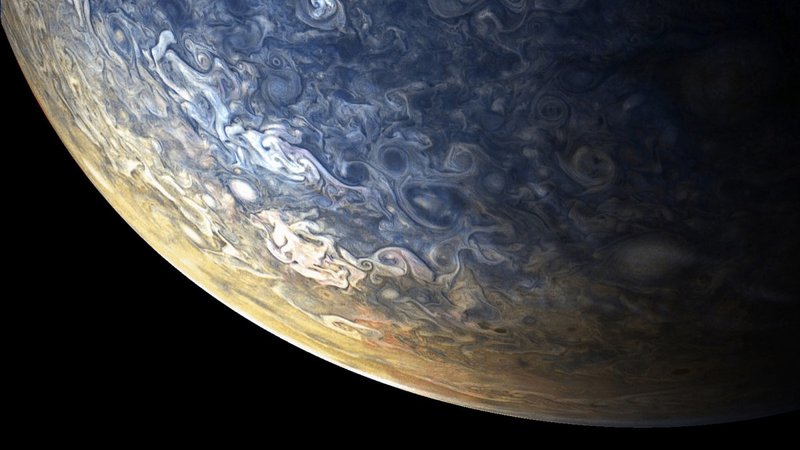 Others dazzle with their detail of the planet’s thick cloud bands and powerful storms. 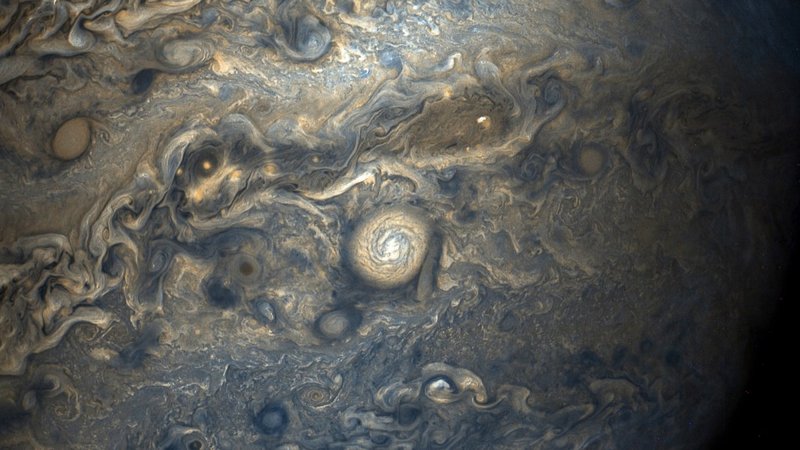 Some of the tempests are large enough to swallow planet Earth — or at least a good chunk of it. 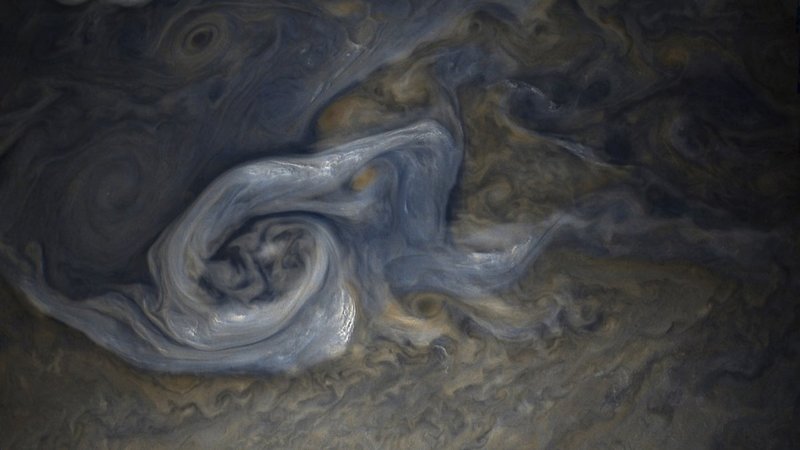 The planet’s atmosphere is a turbulent mess of hydrogen and helium gases. 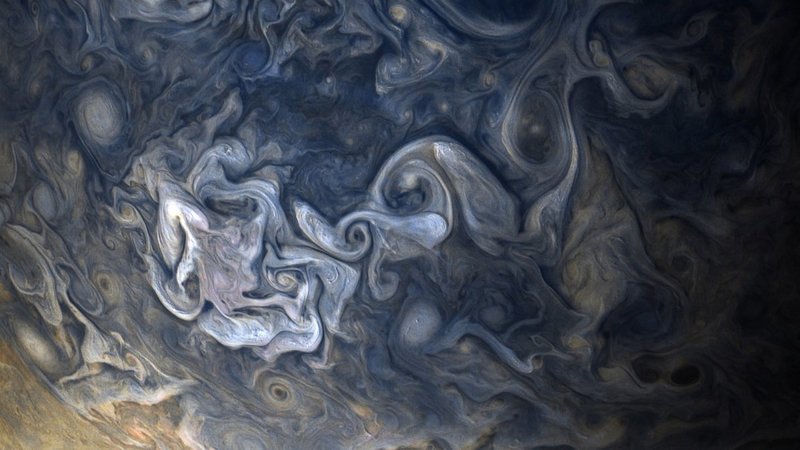 There are also traces of molecules like ammonia, methane, sulfur, and water, which give the clouds different colors and properties. 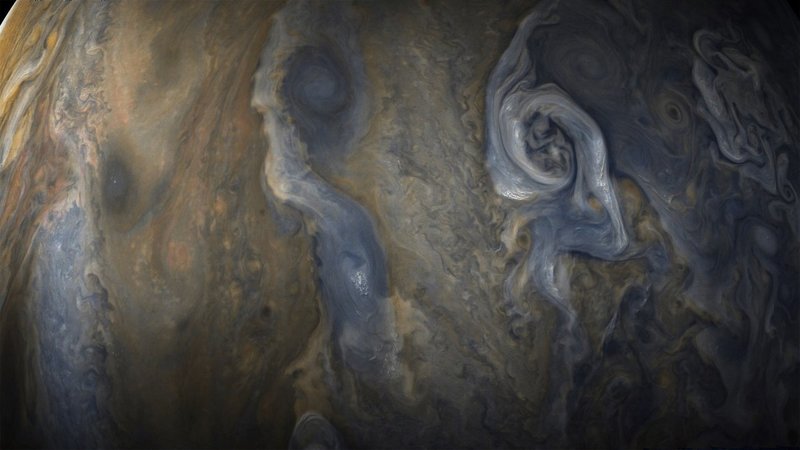 The mixture sometimes creates features that look like faces (as seen on the left in this image). 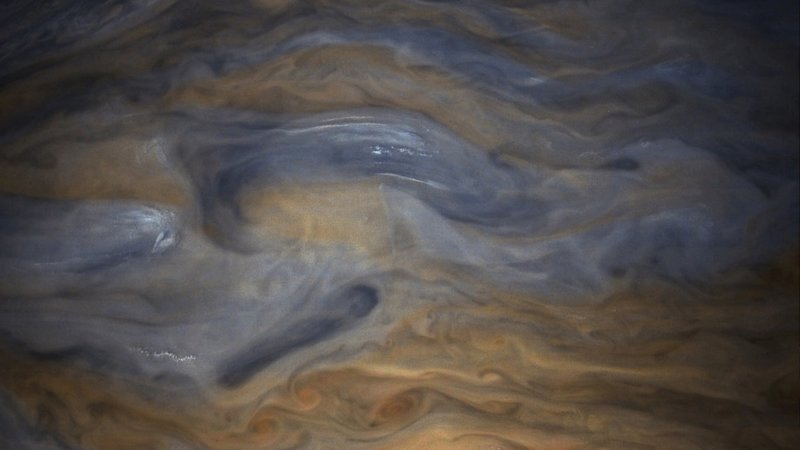 Other times, shining-white clouds fill up most of a band. 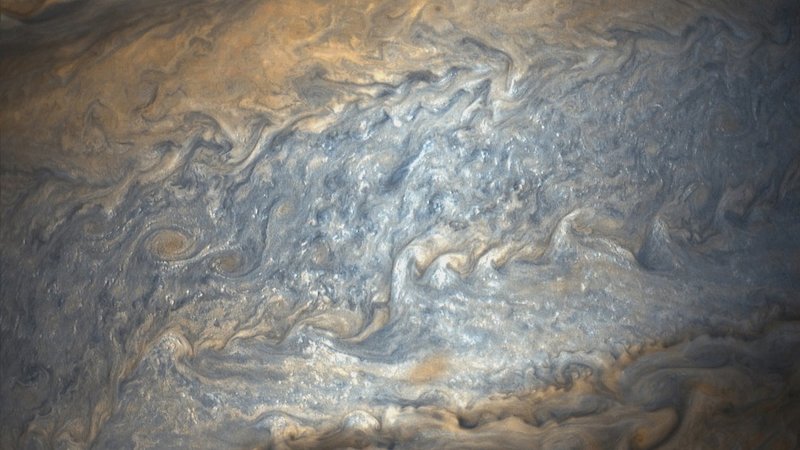 Many cloud bands have features called chevrons. These atmospheric disturbances blow at several hundreds of miles per hour and sometimes zig-zag through a band, or punch through into others. 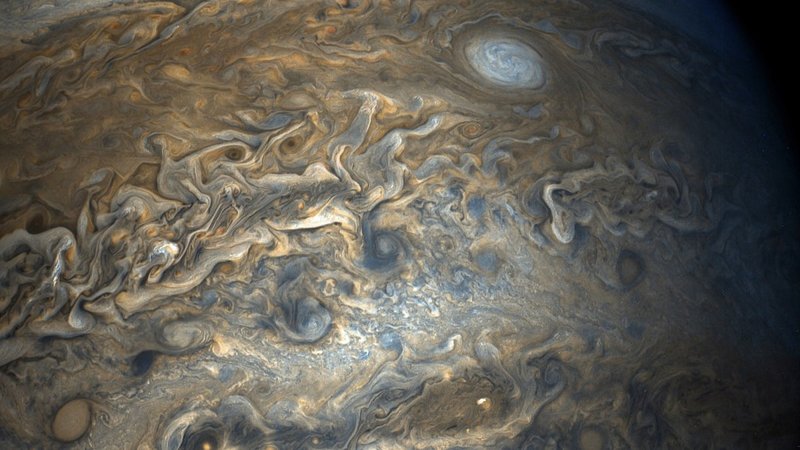 In this older view of Jupiter, from Juno’s eighth perijove, two cloud bands battle for dominance — one of which contains a swirling storm many times larger than a hurricane on Earth. 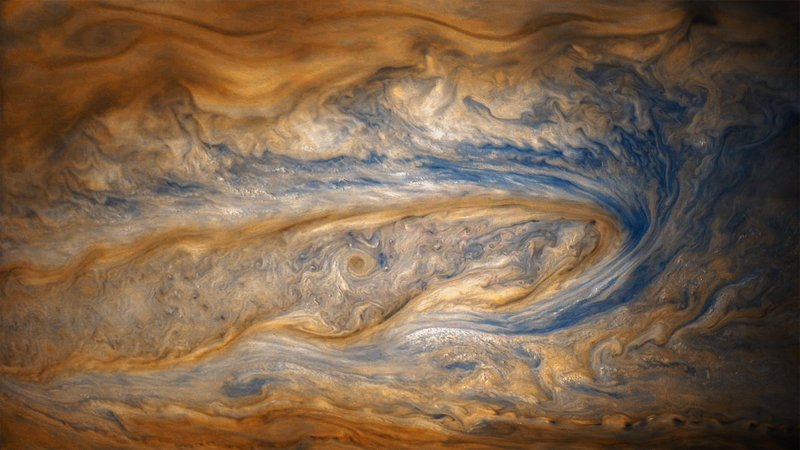 The spacecraft will continue to document Jupiter for as long as NASA can keep it going. But not forever. 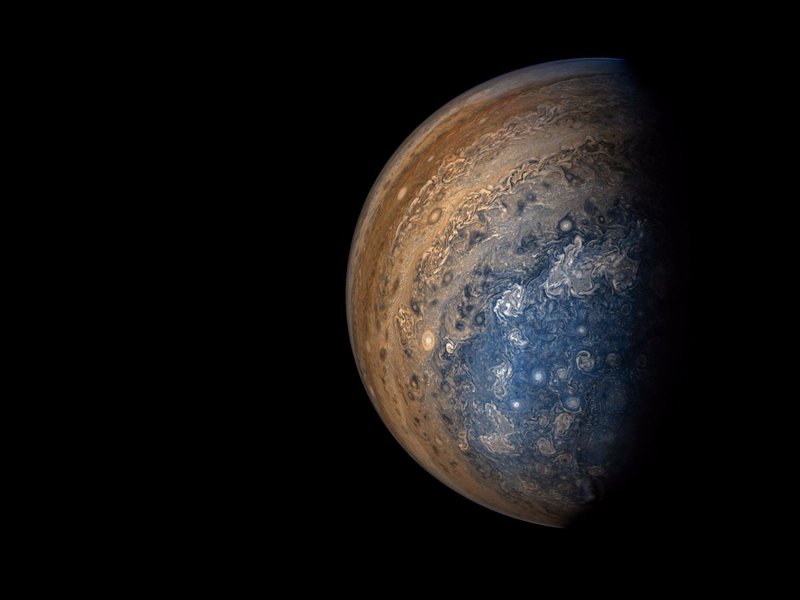