Nāgārjuna and the Greek Philosophers 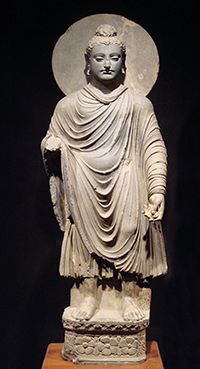 If you study philosophy from different parts of the world for any length of time, you will eventually run into ideas that seem remarkably similar. The next logical question then becomes, “Did one philosophical tradition influence the other, or did this concept arise spontaneously in two cultures separated by both space and time?”

This sort of transcultural overlap is apparent when you look at the writings of the Greek philosopher Pyrrho of Elis, who traveled to India with Alexander the Great around 326 bce, and on his return founded the school of Skepticism. But while he was there, he observed the religious ascetics living indifferently to their circumstances.

According to Pyrrho, because our sense perceptions are inherently unreliable, the best way forward is to suspend all judgment and to live according to reality as it appears. This neutral position of accepting things as they appear echoes the famous tetralemma by the Indian Buddhist philosopher Nāgārjuna, the best-known member of the Mādhyamika school in the Mahāyāna Buddhist tradition. Pyrrho’s idea also shows up in the early canonical texts of Buddhism.

In an interview with Tricycle, Buddhist teacher Stephen Batchelor phrases Nāgārjuna’s tetralemma as: “We need to recognize that things no more are than they are not, that they neither both are and are not, and they neither “are” nor “not are”.

For Nāgārjuna, the effort of rejecting the thesis and its negation—and their combination—formed an important part of the Middle Way. For Pyrrho, allowing the mind to rest in radical uncertainty—or unknowing—can lead to aphatos, which means speechlessness. This, in turn, will give rise to ataraxia—untroubledness, or what might also be viewed as a deep peace.

The similarity between the philosophical ideas from these two cultures is remarkable. But whether Pyrrho picked up this idea from the Buddhists, or whether it had been developing in Greece before Alexander embarked for India, Pyrrho—like the Buddhists—put this concept into practice by using it to radically change how he lived in the world.

Creativity can be seen as a state of natural flow...

SAND18 US — Is Nondual Awareness at War with our Humanity?

Awakened living realizes that the absolute and the relative dimensions of our Being are simply “not-two.”

Deepening Our Feeling for "Us" - SAND19 US

Lama Tsomo teaches us the ancient Tibetan compassion practice of Tonglen, one of the Four Boundless Qualities

The Trika Shaivism of Kashmir

With Mark Dyczkowski and Zaya Benazzo

Zaya Benazzo interviews Mark Dyczkowski on the history of Tantra

With Sam Harris and Roland Griffith

Sam Harris speaks with Roland Griffiths about the current state of research on psychedelics.

Embracing the Flame of Longing

Holding the Thread of Life - SAND19 US

Eric replies to questions at his Amsterdam retreat

The Path of Feeling

With Turiya Hanover and Zaya Benazzo

The Quest for Nondual Reality - SAND19 US

The complexity of the present time seems to demand a deepening of our nature if we are going to survive.

SAND18 US — Clear Teachings from the Tibetan Tradition

Dzogchen, the bardo, sleep and the yoga of dreams

The Utter Simplicity of What Is - Part II

When even the sense of being collapses into the utter simplicity of what is.

Final teaching at Opening to the Unknown, Amsterdam 2018.

In most spiritual traditions, love is seen only as universal or cosmic love.

It is the mind that turns now into past, present and future, and there is no way to leave the now.

Become the Possessor of Awareness

You who are not yet aware, become the possessor of awareness.

The Discovery of Shakti

Everything in the universe is shakti and spiritual life is the discovery of shakti.

Once you begin to taste the freedom of your true nature and are no longer bound by your ego identifications, your way of being can become significantly more graceful.

The Utter Simplicity of What Is - Part I

When even the sense of being collapses into the utter simplicity of what is.

If Your Dog Asks You What You Feel

Separation and no separation are concepts in the mind

The Awakening of the True Body

In this interview with Zaya Benazzo from SAND Italy, Ellen Emmet talks about the relationship between self-enquiry and the exploration of the body through tantra.