For many people, psychedelic drugs are intimately connected to the 1960s American counterculture, with images of hippies expanding their consciousness and author Ken Kesey’s mind-blowing Acid Test parties. But what many people don’t know is that before hippies were tripping out en masse, scientists were actively researching psychedelics for potential (non-trippy) applications — some thousand peer-reviewed studies were published before the mid-60s, according to author Michael Pollan. 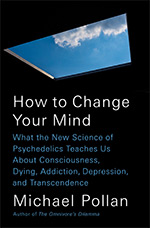 In recent years, starting in the 90s, scientists have been returning to the psychedelic fold, administering these drugs to people in controlled settings for a variety of conditions from depression to addiction, and even to help the terminally ill cope with the fear of dying. Pollan explores this psychedelic resurgence in a new book called “How To Change Your Mind: What The New Science Of Psychedelics Teaches Us About Consciousness, Dying, Addiction, Depression, And Transcendence,”. He also shares his own experience with psilocybin, the active ingredient in magic mushrooms, and talks about what these drugs mean for our understanding of consciousness.

Recent scientific research on psychedelics includes a Johns Hopkins study that looks at whether psilocybin can help people quit smoking. There are also studies investigating the use of this drug to treat depression, or to help people confront their fear of cancer or dying. The benefits of psychedelics for these conditions may stem from the effect they have on our consciousness, which Pollan describes in his book and in an interview with NPR’s Terry Gross.

Pollan tells Gross that humans have been using plants and fungi for a long time to change their consciousness. He doesn’t go quite so far, though, as proponents of the “Stoned Ape Theory” , which claims that major leaps in human evolution occurred when early humans ingested magic mushrooms. But Pollan does describe how these drugs can alter consciousness.

In the interview with Gross, Pollan describes the experience of one man, a journalist in his 50s who had cancer of the bile duct that had spread into his lungs. His illness was terminal. The man entered the psilocybin trial at New York University. While on psilocybin, he had a vision of his consciousness enduring even after his death. As this was happening, he realized that that he would be okay with going to the place where his consciousness dwelled, but wasn’t quite ready yet.

Like others who have used psychedelics, this experience had a lasting impact on the man. He stopped chemotherapy because he wanted his final months to be more about quality than quantity. Pollan said that the man, even as he was dying, was putting out such a remarkable “vibe” that hospital staff were drawn to him.

This shift in the man’s attitude is similar to how others with terminal cancer respond to psychedelics. Pollan says that there is something about the mystical experience of psychedelics that makes it easier for people who are dying to let go. This may be the result of the drugs causing the extinction of “self,” which Pollan says is like a “rehearsal for death.”

So if psychedelics cause something to be extinguished, what is it that is going away? Part of this is the ego. One role of ego is to tell stories about ourselves, stories that follow us throughout our lives. For example, if you’re depressed, the stories may include how worthless you are or how your life will always be terrible. If you’re addicted to nicotine, the story might be that you need cigarettes to get through your work day.

Pollan tells Gross that psychedelics disable for a short time the part of the brain where the “self talks to itself” — that place where our stories are created. This default mode network, as it’s called, connects the brain’s evolutionarily more recent cortex to the deeper emotion and memory centers. This part of the brain gives us the ability to reflect on ourselves, ruminate, and time travel (not physically, but by thinking about our past and future).

When psychedelics downregulate the default mode network, people experience the dissolution of ego or self. Gone are the stories that hold us together in our daily lives. Pollan said that this can be “terrifying or liberating” for people. But as with cancer survivors who make peace with dying, this experience can also shift a person’s perspective about the nature of life itself.

Pollan described his own (clinically supervised) experience with psilocybin as being “outside” himself. However, he didn’t experience the total dissolution of himself as others did. But he tells Gross that the “consciousness that beheld this ... was not my normal consciousness.” So even with the stripping away of the stories — the ego, or the little-s self — there is some consciousness that still remains.

Although the ego takes the blame for much of our suffering, it isn’t something that can be casually tossed aside. Ego does many things for us — including, says Pollan, helping get his book written. Psychedelics, though, help people realize that they are not identical to their ego. Knowing this gives us “another ground on which to plant our feet.” When this happens, the ego becomes a voice in the background telling stories about ourselves, even though it is not actually ourselves.

What does this say about the nature of consciousness? Some people, including many scientists, think that the brain is the seat of human consciousness. Others are not so sure. Pollan tells Gross that this is only a hypothesis right now. Others believe that consciousness is a property of the universe itself, like gravity or electromagnetic radiation, with our physical brain rising out of that consciousness.

As the title of Pollan’s book suggests, he focuses on what psychedelics can teach us about consciousness and transcendence, and also what it can teach us about addiction, dying, and depression. The last three have more scientific studies to back them up, but what psychedelics have to say about the first two may have the biggest impact on our understanding of the world we live in, and our place within it.