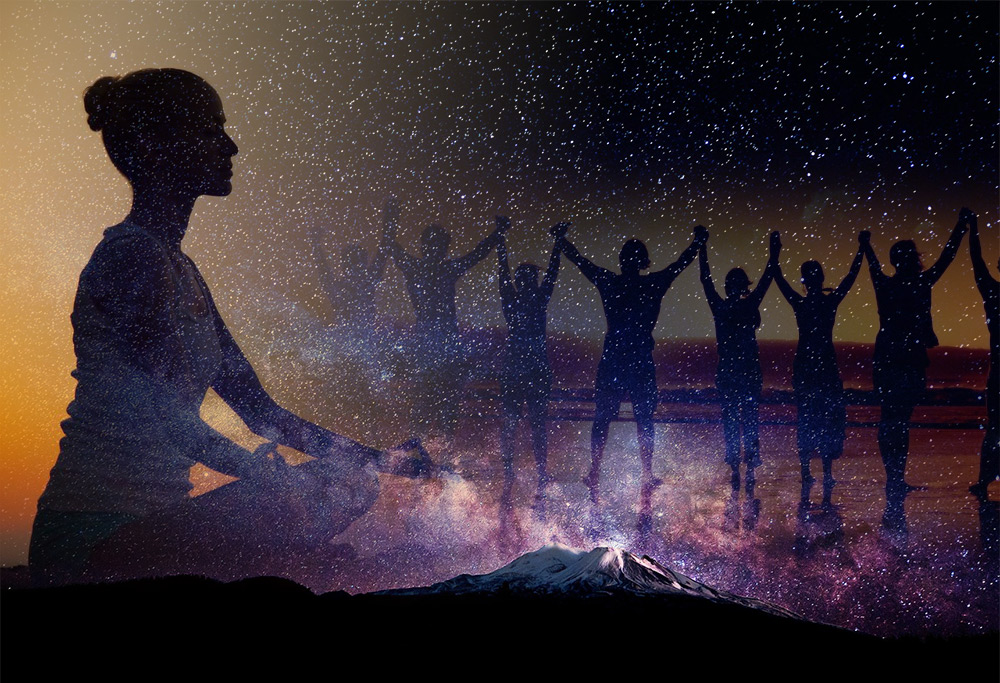 As meditators we have experience of timelessness. At the beginning, timelessness comes to us only in glimpses, but with years of meditation, linear sensation by and by disappears and we see we are always and only NOW. How to convey this experience in science has been my work since 1980. Physics today still believes that the universe exists in some physical time which has past, present and future. We do not have any proof for such a view, but this is “scientific” and meant to be “real”. Science is not yet aware that linear time is a psychological time through which science experiences universal changes happening NOW. Meditators have known this for ages, and it is time to bring this view into cosmology.

Considering that only NOW exists, the question of the beginning of the universe makes no sense. The only reasonable way is to think about the universe as a system which is changing in this eternal NOW. Astronomical observations are confirming that in interstellar space elementary particles are created constantly, and that in black holes matter is disintegrating back into the energy of space. Our research group has developed a model of the universe in dynamic equilibrium where the circulation of the energy, creation of elementary particles out of space energy – formation of matter – formation of stars – formation of black holes where matter disintegrates back into the energy of space, is permanent, with no beginning and no end. This model of the universe does not need a creator; the universe is recreating itself continuously NOW.

For every intelligent person the Big Bang model has a supernatural and religious flavor – even as a child I did not like the idea of the universe beginning in a Big Bang. Our research group has recently published an article about our cosmology model in NeuroQuantology and we will continue to argue that the Big Bang theory should be dropped because it is not supported by the latest scientific discoveries.

In order to serve humanity science will need to include meditation because the meditative experience of the world integrates all that exists in one living organism, including oneness and non-duality. Today’s scientific approach of analytic research reduces existence into small pieces, so the quality of oneness is lost. Humanity, an integral part of nature and the universe, cannot survive without fully integrating non-duality in our daily life. That’s why it is important to bring meditation into the educational system worldwide. In meditation we discover consciousness – oneness - which is fundamental for an intercultural society where nationality, religion and race are secondary. The primary is the discovery of consciousness, which is the core energy of the entire universe.

You can read more on this subject in the December 2017 issue of NeuroQuantology. See the article Advanced Relativity for the Renaissance of Cosmology and Evolution of Life at: https://www.neuroquantology.com/index.php/journal

Amrit Srecko Sorli is a physicist working with Davide Fiscaletti on Advanced Relativity. He has published around fifty scientific articles and seven books. The main result of their research is that time is merely the mathematical parameter of motion in space, while variable energy density generates mass and gravity. Linear time - past-present-future - exists only in the mind through which the observer perceives reality. In Advanced Relativity what can only be experienced (and not measured) has equal scientific validity. Amrit’s latest book is The Physics of Now: https://www.amazon.com/-/e/B00JQEEYYY.