Laozi and Quantum Physics - Part 3 of 3 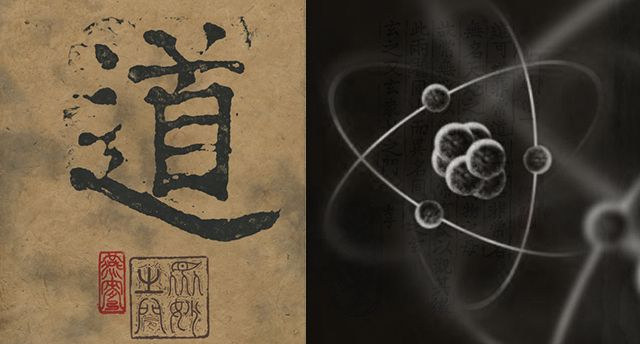 Laozi and the Dao

Laozi’s Daodejing is the foundational text of Daoism, dating to the sixth century BC according to Chinese tradition or to the forth century BC according to modern scholarship. Its first chapter can be read as a lucid formulation of the co-emergence of subject and object from the primal totality that Laozi calles ‘the Dao’. The emergence of a multiplicity of beings and things, standing in apparent isolation and objectivity, is what Laozi calls ming, ‘naming’: ‘naming’ is the mother of ‘the ten thousand things’. This process of ‘naming’ can be understood at many levels: on a rather immediate level it can be taken to refer to the discursive mind, that reasons and analyzes and classifies and separates the undivided flux of experience. But it can be taken one step further, it can be taken to refer to the inevitable subject/object split that is implicit in the law of experience itself: by creating a trace, all experience in a sense betrays itself by creating the appearance of an objective world and of a subject contemplating it ‘from the outside’.

As for the ultimate ground of reality, the Dao, the unnamed, it is ever present and ever unexpressible. It is ‘unnamed’ in a radical sense: it cannot be apprehended in terms of subject and object, in terms of mind and matter. But let us listen to what Laozi himself has to say.

The Dao that can be told is not the eternal Dao.
The names that can be named are not eternal names.
- Tao Te Ching: a guide to the interpretation of the foundational book
of Taoism

On one level these first two verses say: all discourse is contingent, all representations are only conditionally valid, all prescriptive norms are relative. Whatever we can say about reality is only a map, and a map is not the territory. ‘The territory’, reality, is forever beyond the reach of any map we can draw, is forever beyond the speakable. Dao called Dao is not Dao. No name we can name is an eternal name. ‘Name’ here stands for all representations, it embraces the whole dimension of our effort to describe reality. Laozi says: names, representations, are all relative, contingent, they have meaning within the context of a certain universe of thought, they are effective in order to reach certain goals, they are goal-dependent.

But on a deeper level these two verses can be taken to refer to the process of experience itself, to the general ‘law of knowing’ as subjects embedded in the world. As soon as there is experience, subject and object arise. As soon as consciousness draws the distinction between self and not self, I and other, I and world, names are there, i.e. ‘things’ are born. The universe is a universe of things, of objects, because it is a ‘named’ universe.  Things do not pre-exist consciousness: they emerge in the act of naming. Our modern scientific ‘myth of origins’ views things as primordial and consciousness as a later, perhaps accidental, addition to the scene. It goes somewhat like this: first there is the big bang, then the evolution of matter, then heavy elements are formed, then in some special circumstances organic molecules appear, then again in special circumstances life arises, and at some point in the evolution of life, perhaps in connection with a sufficiently developed nervous system, this something we call consciousness wakes up and starts looking around. That is the contemporary standard version of our story. Consciousness is a late guest who accidentally walks into the party. Ancient cultures, on the other hand, saw the whole universe as animated, they found consciousness everywhere. From this other point of view, matter and consciousness are not really two separate substances: they are two sides of the same coin.

Without name, heaven and earth’s beginning,
with name, the myriad beings’ mother.

The objective world and consciousness co-emerge in the act of experience. Then in the most basic sense ‘names’ indicate the process through which the inseparable unnameable totality of what is, the unus mundus, unfolds into subject and object, becomes conscious of itself by splitting into mind and matter, consciousness and world. In the Upanishad this process is described as the act by which Brahma, the creator, feeling bored with his/her eternal perfection, unity and solitude, chooses to split into the innumerable beings, to become cow and bull in order to play hide and seek with him/herself - and thus creates the world.

Of course the process of co-emergence of subject and object should not be understood as an act of creation happening at a certain moment in time, so that from then on there actually are two separate things, matter and mind. It should rather be conceived as constant creation, an act that is present in each ‘atom of experience’. And in it nothing is ever created as a ‘thing in itself’. The two poles, mind and matter, remain inseparable: the world only exists as world experienced by consciousness, and consciousness only exists as consciousness experiencing a world.

Therefore, ultimately, reality does not consist of things, of separately existent singular beings. Nevertheless, we live in a world of things and of individual beings: we live in a ‘named’ world. It could not be otherwise, because as soon as consciousness is there as subject, a world, an ‘other than itself’, is given as its object. The ‘nameless’ is the undifferentiated, the primordial unity, the unus mundus, the Dao. ‘Naming’ is the act by which out of the undifferentiated arise subject and object, consciousness and world - and thence unfold ‘the myriad beings’. The act of ‘naming’ is ‘the mother’. In her womb starts our journey of beings that experience themselves as independently existing - and to that womb our journey returns.

This is the meaning of the statement that ‘in the beginning there is the Word’, and for this reason in African religions the word is conceived as creative power. Beyond the universe of names there is only the nameless Dao, existence ‘beyond the power of words to define’.

As soon as the myriad beings arise, as soon as we exist as individuals and identify with a body, attraction and repulsion arise. This is so already for an amoeba: it seeks food and moves away from toxic stimuli. We would not be here if a long chain of evolutionary processes had not selected the same attitude in us. Desire (in a positive and negative sense, attraction and repulsion) is the law of individual existence.

Buddha framed the problem of desire in the most concise and elegant manner. Desire follows the identification with a self like a shadow: we are attracted towards what we perceive as expansion of the self, survival, pleasure, and recoil from what we perceive as contraction of the self, death, pain. But the self is not intrinsically existent: it is an illusion, a mirage, and this illusion is impermanent. Therefore, ultimately, all desire is bound to be frustrated: we do get old, contract and die. Desire is the root cause of suffering.

The Buddhist notion of anatta, no self, fits very well with the world image of contemporary physics, which describes all matter/energy in terms of infinitely extended fields. Individual particles do not really exist as localized objects; they are simply localized manifestations of the fields. E.g., an electron situated here on earth and another electron located in a far-away galaxy, are not two distinct objects: they are inseparable manifestations of one and the same field embracing the whole universe. In this perspective our own body is also not something possessed of a separate, intrinsic reality: it is rather something like an ‘interference pattern’, temporarily formed by the superposition of a certain number of fields extending throughout the universe.

A simile here might help us: our body can be compared to a wave arising on the surface of the ocean. A wave does not consist of a travelling separate mass of water. It is simply an emergent pattern in the motion of the ocean water, a pattern that propagates more or less undisturbed for a little while, then dissolves into other emergent patterns. The ultimate reality of the wave, we might say, is only the ocean. Therefore if we imagine the wave as a self-aware being conditioned to seek its own survival as a separate entity, its desire is inevitably doomed. This is our predicament as humans, as self-aware beings: we don’t exist, but we are attached to our existence. Death is the ultimate frustration of desire.

The first of Buddha’s Four Noble Truths is therefore the simple statement: existence (ex sistere, standing outside, being an individual entity separate from the whole) is suffering. That is the starting point of Buddha’s path, the path going beyond suffering. Buddha’s path is not essentially different from that of Laozi or fundamentally from that indicated by all Eastern spiritual traditions. Realise the illusory nature of the self: ‘you’ do not exist. Realise you are not the wave, you are the sea. When this realization becomes your living experience, the identification with desire ceases. You are then free: you have gone beyond suffering.

There are therefore two ways of being in the world. Free from desire, unidentified with a self, we contemplate the mystery of this wonderful, vast, incomprehensible existence. Immersed in desire, we live the whole gamut of human passions: love, hatred, joy, sorrow… We go through all the rainbow stages of the journey through form, what Buddhists call samsara, the wheel of conditioned existence.

These two arise together, but have different names.
Together we call them dark, the darkest of the dark,
the door of all mysteries.

Laozi’s way, just as the way of Mahayana Buddhism, the ‘great vehicle’ tradition, is not a way of asceticism and renunciation. The idea is not to leave the world in order to seek a mystical elsewhere (where else could you go?). The mystery and its manifestation, the boundless and the boundaries are two faces of the same reality. Nirvana (liberation, the extinction of the identification with a separate self) and samsara are one. The ocean and the waves are the same water.

Therefore Laozi does not say: give up being identified with the wave and identify yourself with the ocean, which is your true nature. His statement is subtler: he says ‘these two arise together, but have different names’. We are asked to keep our awareness in two places at once. There is no self, yet I exist as a self. The wave is just ocean, but it keeps dancing its dance as a wave. Laozi says: live in the world of manifest reality, the world of things, the world of desire, experience not just the mystery of the boundless, but also the infinite charming and terrifying details of the boundaries. Be with form, be with desire, but remain aware of the formless, remain aware of the state that is beyond desire. Be in the world, but not of the world.

First published in the Holistic Science Journal, September 2012
The author spoke at SAND Italy 2015
< Back to Part 1

Silence is a practice—a discipline or a passion...