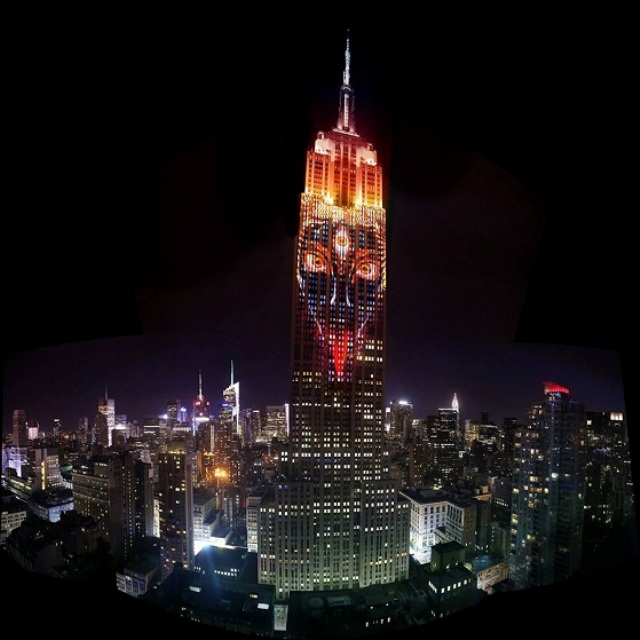 Donald Trump might have become the president of the United States. But make no mistake, it is really Holy Darkness that won this election.

Last year, Kali, the Hindu Goddess of death, destruction and resurrection, appeared on the Empire State Building, projected as an avatar of conservation by the filmmakers of Racing Extinction, a documentary about the environmental catastrophe now upon us. At the time I was so struck by the image, I wrote an article about the apparition. This is the sign of the times,  Kali Takes New York, I raved.

On election night, as the results were projected onto the Empire State Building, all I could see was Kali’s fierce stare. This was déjà vu. This time, Kali took America.

Donald Trump might already be picking his deplorable cabinet, but it is the Dark Mother, the destroyer of worlds, oracle of holy change, the tenderhearted be-header, that won this country. Kali has brought down our house in a shocking blow; all the illusions of America, stripped in a single night. We are not who we thought we were. Now we must get ready to stand in her fires of transmutation. We need them.

Listening to Hillary Clinton’s concession speech, one had the impression that this was a different woman from the political candidate that we have come to begrudgingly accept as the champion of the Democratic Party, assured by the establishment to become the first Madam President.

Stripped of her hopes and lifelong dreams, speaking honestly and transparently about her pain, this woman in a dark suit was a far cry from the controlled, manicured version of her shiny political persona. Stripped of her agenda, stripped of her certainties, this Hilary might have won the country. This Hillary touched our hearts. This is what we look like after the Dark Mother has had her way with us.

We stop shining of the false light. As our heart breaks, as our veneer cracks, we open to more integrity, more truth, more tenderness. We stop trying to be all things for all people. We become this one small thing, feigning nothing.

“Only to the degree that people are unsettled is there any hope for them.” ~ Ralph Waldo Emerson

Paradoxically, the price of true hope, it seems, is being unsettled beyond repair. And this is exactly the opportunity our political moment is presenting to us all. Right now, from all corners of our shocked culture, there are cries of hope, demands of needing to become even brighter lights amidst the spreading darkness. I disagree.

I think that this moment gives us an opportunity for reckoning only if instead of running for the light, we let ourselves go fully into the dark. If instead of resolving our discomfort too quickly, we consider the possibility of staying in the uncomfortable, in the irreconcilable, in the unsettled.

Before we rush in to reanimate the discourse of hope prematurely, we must yield to what is present. Receptivity is the great quality of darkness; darkness hosts everything without exception. The Dark Mother has no orphans. We must not send suffering into exile — the fear, the heartbreak, the anger, the helplessness all are appropriate, all are welcome. We can’t dismember ourselves to feel better.

We can’t cut off the stream of life and expect to heal.

Cutting off the inconvenient is a form of spiritual fascism. By resolving to stay only in the light in times of immense crisis, we split life; engage in emotional deportation, rather than hosting the vulnerable. Difficult feelings need to be given space so they can come to rest. They need contact.

In a culture of isolation, be the invitation to everything.

The intuition that the Dark Mother has returned is pervasive if we heed the signs, and our thirst for the dark is deep. Her every apparition spreads like wildfire. My Kali article went viral within hours, it was as if that image of Kali up there on top of the world overlooking Manhattan nourished the collective soul.

There is a great yearning for change in the order of things, and the Great Mother is leading the revolution. I’m with her. 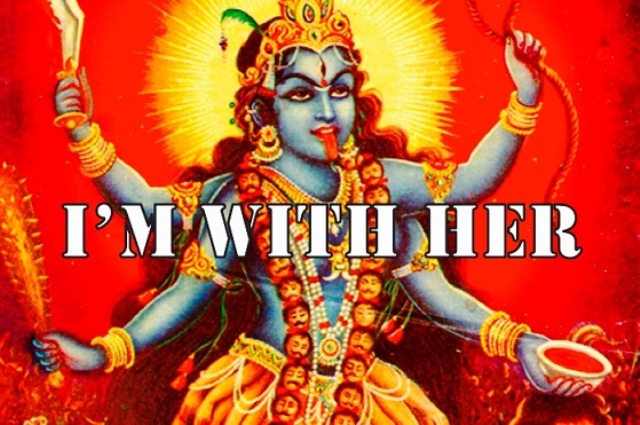 Christian theologian Mathew Fox speaks extensively about the reemergence of the Dark Feminine archetype into our collective consciousness in his piece The Return of the Black Madonna. It is really in darkness, he reminds us, “where illusions are broken apart and the truth lies.”

We are collectively getting so sick and tired of lies, of the superficial, of the shiny neon lights of pop culture, pop spirituality and politics as usual. We thirst for the Real. And the Dark Mother is here to quench.

We saw darkness reclaiming its place also in the passing of Leonard Cohen, this most belated of biblical prophets. He left us with his last and perhaps most spiritually astute album, “You want it Darker,” which has skyrocketed in popularity. The entire album is the ultimate invitation into Holy Darkness. Once he famously preached that the cracks are how the light gets in. Now, he assured us God wants it darker.

Many have interpreted it to be an expression of hopelessness. No. He is asking the only relevant question of our time, whether we can swallow the pill of darkness and still say Hineni! I am here, God, here I am, bring it on! In his last interview about the album, Cohen says that this track is about offering ourselves up when the “emergency becomes articulate.” I think we can all agree that it has finally become articulate.

The mystics tell us that we need spiritual crisis. That we must enter the Cloud of Unknowing, the deepest despair, the most profound darkness within, without hope, in order to grow spiritually. They call such a time of deep crisis, of great uncertainty, the Dark Night of the Soul. There, in our radical desperation, in our absolute abandonment, it is said, the Divine Doctor awaits. Holy Darkness was Her medicine all along.

Darkness heals us without a spoonful of sugar; the wound is the gift, and this election is a good dose.

As the spirit of the Dark Mother hovers upon the collective waters, she has much to teach us. Kali is the great protectress and ultimate sacred activist. She is standing at Standing Rock, roaring against the black snake and the abuses of corporate capitalism. She is marching in solidarity with the Black Lives Matter movement.

She is here mourning the dying out of species and showing her terrible tongue at the shocking xenophobic, nationalist regressionism swallowing the planet. She is the changing of the tides, and she means business. She has come to burn up the old paradigm of separation and transfigure the collective heart.

Scientists tell us we live amidst the 6th extinction. Every 20 minutes, another species disappears from our planet. Our oceans are dying, our rivers are burning. Kali beckons us to embrace our sacred fury and let our heart roar for all living beings. Like her, we must rise as protectors, else perish as fools. She knows that we belong to each other and share one fate.

Recently, three protesters at Standing Rock got their Kali on. In a radical act, worthy of the great Mother herself, they crawled inside the Dakota Access Pipeline, putting their bodies on the line. Reading about it, I was shocked, I was troubled, I was moved. Suddenly I realized that love is always a disturbing presence. We must disrupt the order of things to obey the orders of Love.

These acts will keep growing, because the fires of truth that Kali has lit are spreading. As the old story of convenience and profit turns to ash, hearts across the planet are aflame for love and justice. Over a million people checked into Standing Rock after organizers worried that police can track protesters through their Facebook statuses.

Started by an indigenous mother, the Standing Rock protest has become a cultural creative movement no one could anticipate. Here everything meets: social justice, ecological justice, economic justice, sacred activism. And there are reasons to celebrate, such as the Army Corps’ momentous decision to deny the pipeline permit.

Deeply we recognize that we are living amidst the churning of ages, although the climate catastrophe is not yet visible, most scientists now believe it is inevitable.

Climate change is here, whether we believe in it or not. Politically, with the election of Donald Trump, our country and the world have entered a dark night of the soul. We might still live in a culture of shine, greed, glam and white supremacy, but the Dark Feminine has now reemerged into this cycle, and heaven has no fury like the Great Mother scorned.

Now we must rest here in this darkness, to lay heart to the ground as a country, and feel intimately all that is being unraveled here. After all, every seed must go into darkness, must turn inside out, must break open in order to grow.

It is my prayer that our country sprouts. That this regression give rise to a counterculture of grassroots movements the likes of which we have never seen. And to a culture of love beyond measure. 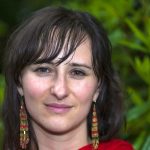 Vera de Chalambert is a spiritual storyteller and Harvard-educated scholar of comparative religion. She recognizes the intricate process of healing and awakening, unfolding for so many around the planet at this time, and offers healing sessions and spiritual direction via Skype and phone. Vera has studied with spiritual teachers, healers and visionaries the world over, and mined for her soul at the Barbara Brennan School of Healing, and Jason Shulman’s School for Nondual Healing and Awakening. She is deeply influenced by Buddhist and Kabbalistic lineages, and is a lover of the world’s great wisdom traditions. She speaks internationally and writes about mindfulness in the modern world and the Divine Feminine. You could visit Vera on her website, and follow her on Facebook and Twitter.

This article first appeared in the Rebelle Society