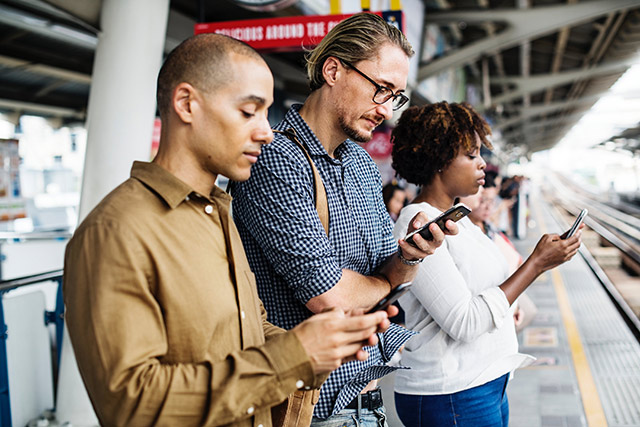 The internet has given us many amazing things — easy access to vast amounts of information, the ability to connect with people around the world, and an increasing number of online tools to improve our mental and physical health (not to mention 24/7 shopping, with drone delivery right to your house).

But like most technologies, the internet also has a dark side. One of these is social media. This tool has the capacity to both connect us with and disconnect us from those we care about. The pull of this digital social interconnectedness is also exceedingly strong, like the Sirens of Greek mythology that lured sailors with their enchanting singing — although in this case it is constant streams of friend’s posts, pictures, and funny videos.

Social media use is very common, especially among certain segments of the population. A recent survey by the Pew Research Center found that 88 percent of 18- to 29-year-olds in the United States reported using some form of social media. This dropped with each age group, down to 37 percent of people 65 and older.

This condition is not included in the latest Diagnostic and Statistical Manual of Mental Disorders (DSM-5) used by health professionals for diagnosis. Neither is the broader “internet addiction.”

Of course, withdrawal from gaming addiction, television addiction and gambling addiction doesn’t produce biological symptoms either, but is recognized by the psychiatric community. Because of the lack of consensus over whether social media addiction is real, some psychiatrists prefer to talk about “compulsive use” of social media, rather than addiction.
Even though social media may not be addictive in the same way that alcohol and recreational drugs are, excessive use of social media is a problem for many people. In a 2017 study in Hungary, 4.5 percent of almost 6,000 adolescents were “at risk” for problematic social media use.

There’s no clear agreement on what “problematic” means, but excessive use of social media can negatively affect a person’s personal, social, and professional lives. Studies have also found links between higher social media use and mental health problems like depression and low self-esteem.

These studies don’t show that social media causes these mental health problems. It could be that people who are depressed or have low self-esteem may be more drawn to social media.

Excessive social media use, though, can distort a person’s self-image by causing them to rely more on the opinions of their social media “friends.” This comes with increased comparisons to other people — something easy to do on social media — and even to younger versions of themselves.

Tim Bono, a psychologist at Washington University in St. Louis and author of “When Likes Aren’t Enough: A Crash Course in the Science of Happiness,” writes in his book that the constant comparing of yourself to others that is fueled by social media can actually make you unhappier. This social comparison is not restricted to the online world, but social media has made it a lot easier.

Social media use also affects three key areas of the brain  — the “mentalizing network” that helps us engage in social activities and judge others, the “self-referential cognition network” that encourages us to talk about ourselves, and the “reward network” which keeps us coming back for more.

Use of social media is also associated with a surge in dopamine, the “pleasure chemical” of the brain. Dopamine increases in response to unpredictability, reward cues, and small bits of information — you guessed it … social media. This makes it hard for people to resist checking their Facebook or Instagram feeds.

Engaging in social media even causes a release of oxytocin, the brain’s “cuddle chemical.” Social media causes oxytocin to increase by 13 percent, similar to what people get when they are marrying the person they love.

Because social media addiction isn’t listed in the DSM-5, it doesn’t always get the attention it deserves. More research is needed to understand the symptoms of the condition, how they develop, and whether there are genetic factors that make some people more susceptible.

But this doesn’t mean there isn’t help if you feel like you spend more time posting online or checking your friends’ feeds than you do connecting face-to-face. Whether you call this an addiction or “compulsive use,” many mental health professionals now specialize in helping people who need less digital social time and more real world connection.