If DNA is Software, Who “Wrote” the Code?

We all love our gadgets, particularly our PCs, Macs, tablets and cell phones – why?

Mainly because of what they empower us to do – the software or “apps” that they run that enable us to connect, perform tasks and calculations and be productive. In the “old days” before apps computer users needed to learn a bit of what is “under the hood”; perhaps not programming per se but some of the arcane commands that made the machines work. And sometimes we forgot they were even machines.  One of my first incredible experiences was when six computer disks at a law firm taught me word processing. I was awestruck by the reality that intelligence could actually be encoded in silicon. This was my introduction to “software.”

Several business and computer books later, somewhat cognizant about how to write “code,” I was fantasizing about writing a scifi screenplay about an intelligent computer program discovered by neuroscience in the brain when I saw a video on TED by geneticist Juan Enriquez. Enriquez described an apple as an [computer] application which runs as an “executable” – it reads or processes its DNA code from top down, executing each line in turn as an instruction.  In the case of an apple, when it receives sufficient energy from the sun, Enriquez said, it executes and drops from the tree.

Enriquez explained how sequencing DNA decodes its programmatic intentions through a combination of proteins, symbolically represented by 4 letters of our alphabet, A, C, T and G. Side by side with HTML, the code for a web page, it looks very similar. 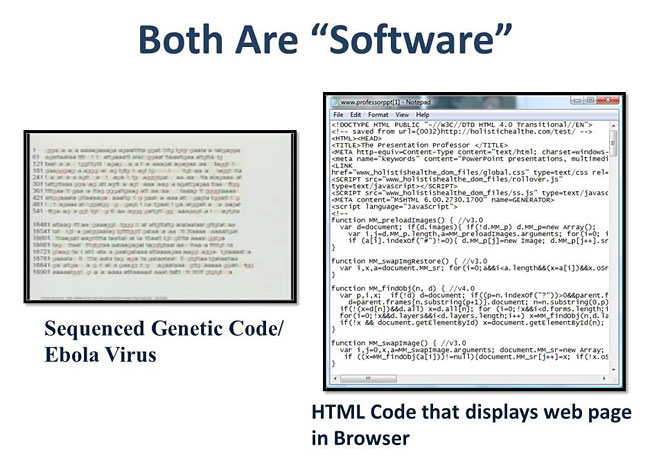 Moreover I realized from the video that geneticists aren’t ever creating life – they are switching the genes on and off using its internal software – and “copying and pasting” the code to, for example, revive extinct species – a process described in the video. I contemplated the reality that perhaps we don’t need to look for “intelligent life” on other worlds… Clearly, to the extent that it is “instructed” by DNA, life itself is intelligent – and it was so before humans even existed.

This insight moved me deeply and as you use computer software every day, I invite you to think about this:

Is software something that arises by accident?  We have direct experience with many “programs” that are encoded; each and every one was intentionally conceived to perform a task. (One can presume that in the case of DNA the task is first to survive, and then?  To awaken?) It is akin to the notion expressed by astronomer Fred Hoyle that to consider the possibility of DNA arising by chance would be like a tornado going through a junk yard and assembling an aircraft.  (Hoyle said this about Life – DNA is the software of life).

So within your biological reality there is software – as Eckhart Tolle says, an immense intelligence that runs you breath, digestion, elimination, and ALL body functions, if all goes well, harmoniously. 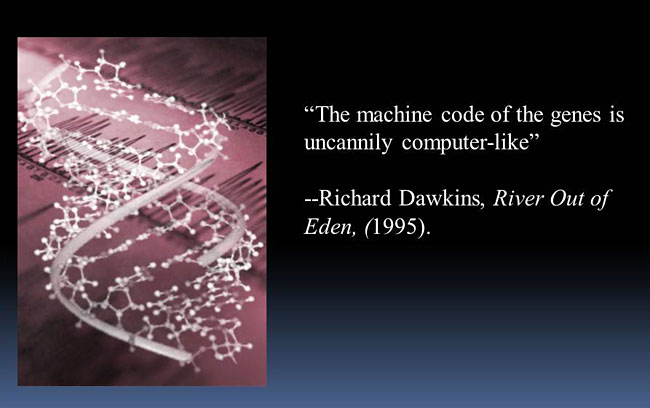 How do we account for such an apparently immense intelligence that is billions of years old? It is looking inside in the same way that we might look outside at the heavens and grope for a rational explanation but find none, and in our gut we feel the MYSTERY.

There are really only two “explanations” – if we eschew the non-explanation of calling it “God.”

One, we can kick the can down the road and presume that some other intelligence (aliens) wrote DNA code and genetically modified us for some alien purpose.  This is a popular theme first raised by Chariots of the Gods by Erik von Daniken, held in contempt by modern science, but possibly true.

The other direction we might go - and this is where neuroscience and quantum physics is headed kicking and screaming - is really the most obvious – Intelligence is not the exception – it is in computer terms, the “default.” Life is a priori intelligent, or a direct expression of a much vaster, infinite and higher intelligence.

This is of course an affront to our scientific hubris but it is the message of Science and Nonduality and the promise of an “observer-based” science that is humble and reverent in the face of “what is.” It is the recognition of nondualism – that all conceptual explanations only further the mystery – and that future discoveries must account for subjectivity and encompass the totality of phenomena. It is not pat, warm or fuzzy – but it is what IS.

With so many people confused and unsure of how and where we came from or what we are, and current science essentially ignoring this question (Consciousness – the hard question), it seems that the opening is right in front of us. Open a web page and View > Source and then recognize that software far more sophisticated is operating – right now – in your body, mind and consciousness.

And ask yourself, if DNA is software, where did it come from?   And then let the question seep deeply into your awareness.