Homeostasis, Feelings, and the Rise of Culture 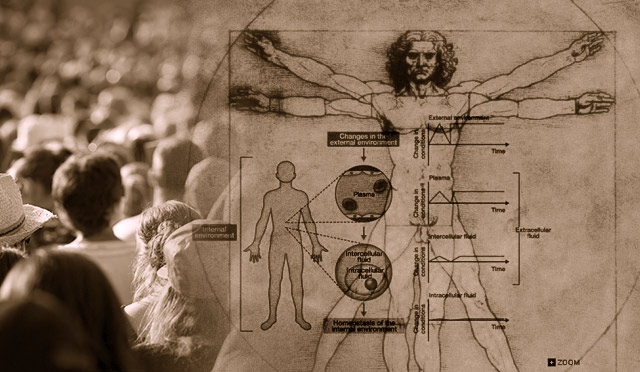 When people talk about the evolution and development of all that makes humans “unique,” one thing that often gets overlooked is our feelings. For neuroscientist Antonio Damasio, though, there can be no conversation about our humanity — or even our culture — without saving a seat at the table for this often-overlooked aspect of our nature.

“It is not possible to talk about thinking, intelligence, and creativity in any meaningful way without factoring in feelings,” writes Damasio in a new book titled The Strange Order of Things: Life, Feeling, and the Making of Cultures.

Damasio argues that feelings, which he calls the “unrecognised presences at the cultural conference table,” are not recent additions to the canvas of life. If you look beyond our ape ancestors, you will find the underpinnings of feelings in the cultural-like interactions and cooperation of insects 100 million years ago.

But Damasio reaches even further back in time to billions of years ago, when single-celled organisms began behaving in ways that bear some similarity to human social behaviors. This puts a decidedly different spin on the source of human culture, which we have long thought to be the unique product of our human brains.

At the heart of Damasio’s argument for a billion-year continuity of feelings and culture lies homeostasis, the tendency for all living things to maintain a stable internal environment. It is this natural ability that allows organisms to survive in a range of environments, even when conditions fluctuate. Homeostasis occurs without conscious control — a shifting of neural and chemical processes around a “happy” set point.

For Damasio, homeostasis is also what connects humans to our ape ancestors, insects, and even ancient bacteria. He describes homeostasis more poetically than most textbooks, calling it the “powerful, unsought, unspoken imperative” that ensures that organisms not only endure, but also prevail.

The enduring part is self-explanatory — it shows up as horseshoe crabs mucking about for 450 million years; or on a lesser scale, as humans criss-crossing the planet for thousands of years from one extreme environment to another.

Prevailing is a more subtle and seldom acknowledged aspect of homeostasis, writes Damasio, one that “ensures that life is regulated within a range that is not just compatible with survival but also conducive to flourishing, to a projection of life into the future of an organism or a species.”

Prevailing is not just about survival in the present; it also involves looking forward to what has yet to come — the way human culture carries societies forward even as individuals live and die.

Homeostasis drives the behaviors of organisms — search for food, move away from or toward heat, choose a mate, fight for survival. Single-celled organisms rely on “chemical molecules to sense and respond,” writes Damasio. Similarly, ants, bees, and mammals depend upon complex social behaviors for survival — which he writes come from their biology, not from “Montessori schools or Ivy League colleges.”

Humans are not exempt from homeostasis. But we have additional tools at our disposal, such as clothing, shelter, and social organization. The regulation of our internal environment also comes with a visible external gauge — “feelings are the mental expressions of homeostasis,” writes Damasio.

Although feeling is sometimes popularly used to describe a vague idea or notion — such as a “gut feeling” versus a “rational thought” — feelings arise directly from the workings of the body, in particular the internal world of the abdomen, thorax, and skin.

Feelings result from the action of chemical molecules in the blood and nerves — cortisol, serotonin, dopamine, endogenous opioids, oxytocin, and others. The functioning of our internal organs affects these chemicals, which in turn shape our feelings, giving us a “moment-to-moment report on the state of life in the interior of an organism,” writes Damasio.

It is this homeostatic thread that connects humans to the earliest life forms, and human culture to the behaviors of single-celled organisms. We often think of human culture as the product of our knowledge and intellect, but Damasio argues that “cultural activity began and remains deeply embedded in feeling.”

Far from being “occasional visitors to the mind,” feelings pervade our lives. Every image in our mind has a feeling attached to it. Even feelings themselves can be accompanied by other feelings. “There is no being, in the proper sense of the term, without a spontaneous mental experience of life, a feeling of existence,” writes Damasio.

We feel our way through the world as much as we think our way through. Although we try to keep feelings and thinking separate — especially in the ivory towers of academia — they are not two sides of a coin to be chosen at random, but instead are two aspects of the same being.

“If there is no distance between body and brain, if body and brain interact and form an organismic single unit, then feeling is not a perception of the body state in the conventional sense of the term,” writes Damasio. “Here the duality of subject-object, of perceiver-perceived, breaks down. Relative to this part of the process, there is unity instead. Feeling is the mental aspect of that unity.”