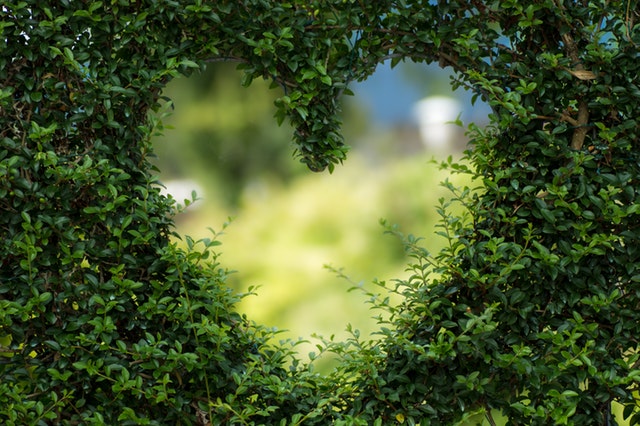 “The Caterpillar is the first character who really makes an effort to guide Alice on her journey. Since she’s tired of growing larger and smaller due to circumstances beyond her control, the Caterpillar teaches her to eat parts of the mushroom to control her size. Some critics, and especially people in popular culture, see the Caterpillar as a representative of drug culture since he’s smoking a hookah and shows Alice how to eat a magic mushroom. But we prefer to see the Caterpillar as a lackadaisical guru who helps Alice figure out how to control the imaginative world that she’s exploring. The Caterpillar also reminds Alice that changing in size and shape isn’t always a bad thing – after all, one day the Caterpillar will metamorphose into a butterfly, and instead of being unnerving, it will be the high point of his life.”1

Everyone needs a lackadaisical, hookah-smoking guru. After all, we too need to be reminded that changing isn’t always a bad thing and it could be the high point of our life. But, on the path to self-discovery, the longest journey, as stated by Gary Zukav, is from the head to the heart. It is akin to an emotional heart transplant. Why?

The Vedic sages did not have the understanding of the structure of the brain, but their exploration of human emotions led them to conclude that we have three bodies — the physical body, the emotional body and the mental body. And they came to similar conclusions as the neuroscientists, that the emotional body is impulsive and acts at times without forethought, hijacking the mental and the physical bodies. We have all experienced instances where we have lost control and acted in ways that we later regret. In these instances, our thinking brain is no longer in control and our emotions have taken over.

Emotions are powerful energies. In Hinduism, there is a powerful imagery of the potential energies trapped in our bodies, the imagery of a coiled serpent. This energy is called Kundalini and is best explained as a parable of Shiva and Shakti. The parable goes as follows:

“Lord Shiva symbolizes consciousness and the unmovable power of the observer. He is said to have been meditating for thousands of years while Shakti danced for him. Her longing to be at one, dancing with her beloved provokes him to open one of his three eyes. She beckons for him to dance with her. He closes his eye and rests back in meditation for thousands more years, awaiting her absolute clarity that joining in harmonious union with him is her true desire. As her longing intensifies, she determines that she must dance with her Beloved Lord Shiva. At that, his three eyes open, they dance together, and all at once the universe unfolds into creation. All of nature is created as a result of their union.”

Both neuroscientists and the Vedic sages have concluded that when the emotional and the mental bodies/brains work in harmony we reach peak levels of performance. The ultimate state of being is when mind, body and heart are in perfect alignment and in harmony with nature.

“Nature is all that dances, all that moves and changes in this world. The witness or seer within each of us is Shiva and the nature of all things around us and within us is Shakti. When Shiva and Shakti are separate, spiritual awakening cannot take place. That separate state is known as a duality. The very merging of Shiva and Shakti obliterates duality and opens the spiritual river of oneness through which Kundalini flows.” 2

Our negative emotions are trapped energies (Shakti) seeking release. Our spiritual metamorphosing happens when we transmute our negative emotions into healing energies. It is the journey that Gary Zukav refers to as the journey from the head to the heart. I have come to think of it as a heart transplant. This emotional transformation has been the most difficult part of my journey.

I have learnt to pay attention to my negative feelings, for negative emotions draw our attention to areas in us that need to be healed. The energies trapped in our emotions are looking to be released. We can release these energies consciously, or they will release themselves, often causing drama in our lives. Emotions that are held back, and not released, leave an emotional scar in us.

We often use the analogy of a musical instrument to describe our emotional state. We say that “our heart strings were pulled,” “we are high strung,” we are “tight as a drum,” “felt played like a fiddle,” etc. There is a good reason for it: our emotions are energies in motion that create sensations in our body. Each emotion has a unique “signature movement” in our body. Anger feels different than love, sadness different from joy. We respond emotionally to life events. It is as if life events strum our emotional strings to produce different notes in our being, Love, happiness, gratitude and awe feel as if our entire being is in tune with the harmony in nature, whereas sadness, anger, fear and disgust produce discordant notes in us.
“It is with heart one sees rightly; what is essential is invisible to the eye” — Antoine de Saint-Exupery, The Little Prince.

I taught myself to watch my emotions. They become objects to be watched. Watching releases the tension in the body. I began to track my emotions, every day for eighteen months, and built a database of my emotions and my mental states and recorded how my body felt in response to an emotional charge. To quantify my emotions, I created a 10-point rating scale. 5 points represented homeostasis for me, anything less than 5 was negative and over 5 was positive. The graph below shows the daily pattern of the state of my mind, body and emotions, over eighteen months of tracking. 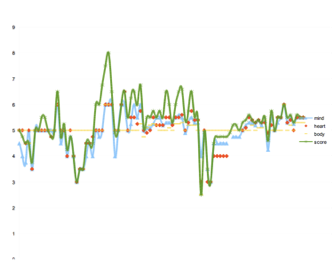 The exact data points are not the point, it is the trends that matter. During this period, I went through many emotional ups and downs, as the lines show, but the overall trend is positive. I attribute this to the fact that through this practice I was better able to cope, and have addressed some of the underlying causes that trigger the negative emotions in me.

I have become a scientist of my own emotions. I am able to watch my thoughts, emotions, and bodily sensations dispassionately. I have discovered a lot about myself just by watching. As the incomparable Yogi Berra said: “You can observe a lot by watching”. 3 I learnt that by staying current with my emotions I am able to get them off my chest. I do not hold them in. They no longer fester in me and become toxic.

I have noticed that negative emotions feel different in the body than positive ones. With negative emotions the body feels weighed down: hence the expression “I feel like I am carrying the weight of the world”. Positive emotions make my body feel buoyant, almost weightless. Not surprisingly our emotional state affects others around us. Emotions are like vibrations emanating from us and creating a field around us.

Negative emotions bring out negativity in others and positive emotions have a positive effect on others. Neurologists attribute this effect to mirror neurons in our brains. These are the monkey see monkey do neurons. “When I see you smiling, my mirror neurons for smiling fire up, too, initiating a cascade of neural activity that evokes the feeling we typically associate with a smile. I don’t need to make any inference on what you are feeling, I experience immediately and effortlessly (in a milder form, of course) what you are experiencing.”, according to Marco Iacoboni, a neuroscientist at UCLA. 4

Negative emotions alert us to the broken pieces of our psyche. They are the tip of the iceberg, and we have to look beneath the surface and discover what triggers these emotions and why we feel the way we do. Heeding the message embedded in our negative emotions is a big part of self-discovery. If we fix what is inside the outside will not matter.