Billions of years ago, an iron nucleus forged in another galaxy was flung into space at close to the speed of light—headed for your cells 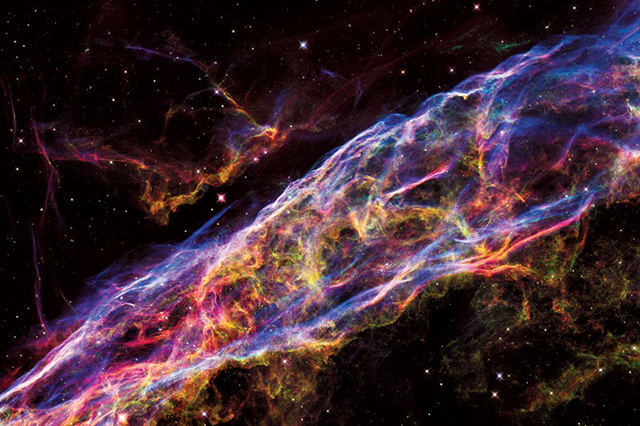 TRAVELLER: A cosmic ray
ORIGIN: A galaxy far, far away
DESTINATION: Our atmosphere
DURATION: Billions of years, or weeks

Its nursery is the heart of a supergiant star about to explode into a radiant supernova. At a temperature of about 100 million kelvin, atomic nuclei collide and fuse, adding still more heat to the furnace. Just there on the outer edge of the core is our traveller, a product of that fusion: a nucleus of iron.

The star’s core has been growing for a few hundred thousand years. Eventually it gets too big to hold itself together and suddenly collapses, generating a supernova blast of radiation that shreds the entire star. Caught in the explosion, the iron picks up speed, is bounced around by a combination of shock waves and turbulent electromagnetic fields, gains more and more energy as it goes, until finally it breaks out of the fireball and flies free.

This is a gentle beginning. Our iron speeds through space, leaving behind it the dead star’s glowing nebula. It is headed for the centre of the galaxy, where a monster awaits: a supermassive black hole, a billion times the mass of our sun. Swept up by a stream of gas, the nucleus is dragged perilously close to the point of no return, where it would be inevitably pulled through the black hole’s event horizon to who-knows-what beyond. But at the eleventh hour it is caught by the intense magnetic tornado that circles the black hole, catapulted into a jet of plasma, and squirted out at 90 per cent of the speed of light.

The shock waves in this jet are even more extreme than the ones of the supernova fireball, turning the whole thing into a gigantic, tumultuous particle accelerator. High-energy charged particles bounce off tangled magnetic fields, gaining energy as they are batted around. A few are accelerated to colossal energies.

By the time our iron nucleus leaves this maelstrom, it has an energy of about 8 joules, millions of times greater than anything Earth’s Large Hadron Collider can produce. Now at about 99.9999999999999999 per cent of the speed of light, it is flung out of its native galaxy into the emptiness of intergalactic space.

As the iron nucleus wanders between galaxies, pulled this way and that by magnetic fields, its view of the universe is a strange one. At this ludicrous speed, the effects of relativity compress faint starlight from all directions into a single point dead ahead. Relativity also does strange things to time. While the nucleus is travelling, the universe around it ages by 200 million years. In another distant galaxy, Earth’s sun completes one lazy orbit of the Milky Way, dinosaurs proliferate, continents split and rejoin. But to the speeding iron nucleus, the whole trip takes about 10 weeks.

On the last day of its intergalactic holiday, our traveller finally approaches the Milky Way’s messy spiral. It heads towards a type G2 dwarf star, and a planet where the dinosaurs are now long dead. According to on-board time, the iron nucleus passes Pluto just 16 microseconds before it reaches Earth. When it arrives here, we call it an ultra-high-energy cosmic ray.

The wispy gases of our upper atmosphere present a barrier far more challenging than anything it has encountered so far. The iron nucleus hits a nucleus of nitrogen, and the extreme energy of the collision not only obliterates both nuclei, but creates a blast of pions and muons and other subatomic particles, each with enough energy to do the same again to another nucleus, generating a shower of ionising radiation that cascades down through the atmosphere.

Some of these particles will hit an airliner, slightly increasing the radiation dose of passengers and crew. Some may help to trigger the formation of water droplets in a cloud – perhaps even help spark a lightning bolt. Some will find their way into living cells, and one will tweak an animal’s genes, spurring on the slow march of evolution. But it is very likely that nobody will even notice as the atmosphere scatters the ashes of an exceptional traveller that once flirted with a giant black hole in the faraway Virgo Cluster.