Listen to Sam Harris in conversation with the author

You’re rich. No, really you are. Whether you’ve paid for this newspaper, or a computer to browse the web on, or even handed a few coins over at an internet cafe, you’re far richer than many of your fellow human beings. As William MacAskill reminds us in his brilliant primer, Doing Good Better, 1.22 billion people in the world earn less than $1.50 a day. Mainly, that’s down to where they happen to have been born: 85% of the global variation in earnings, he tells us, is determined by location. “The extremely poor are poor simply because they don’t live in an environment that enables them to be productive.”

That puts an awful lot of us in an extraordinary position. The money that sits in our bank accounts, sloshes around our pockets or even hides down the back of our sofas has the potential to transform the lives of the very poor.

To bring the reality of this home, MacAskill uses the example of Oskar Schindler, who bribed officials in order to save the lives of Jewish people working in his factory. “You might think,” he writes, “that war is a particularly unusual time, and that altruism like Schindler’s isn’t really that relevant to our lives ... this isn’t true. Every one of us has the power to save dozens or hundreds of lives, or to significantly improve the welfare of thousands of people.”

So, here we are, in a world with unimaginable extremes of inequality – extremes that nevertheless give the lucky ones among us enormous power to effect change. It’s a responsibility and a challenge that can seem overwhelming. Thankfully, Doing Good Better is structured as a toolkit for meeting it. It’s not a literary or even a philosophical read: it’s a manual that bounces along, full of counterintuitive insight. I’ve already changed the charities I donate to as a result of MacAskill’s advice, and if you read the book, I expect you will too.

MacAskill is a philosopher by training, and, astonishingly, still in his 20s. And while he is currently an associate professor at Oxford University, his interest in the subject of altruism is anything but ivory-tower. He has already co-founded two not-for-profit ventures – 80,000 Hours, which advises people on how to choose a career that will enable them to do good; and Giving What We Can, a charity portal that focuses on the most effective kinds of donation.

Effectiveness is, in fact, his watchword: in his view, “effective” altruism is the only kind worthy of its name. A conclusion based on meticulous research and the sifting of evidence, but also personal experience: MacAskill has in the past volunteered to support children with disabilities, worked as a teaching assistant in an Ethiopian classroom and tried to convince people on the street to give money to Care International (where he admits he encountered mainly “blank, apathetic stares”).

The formula for deciding whether a charity is effective is straightforward: how much of an improvement do you make in how many people’s lives, for how much money? The answer, for many “good causes” may come as a shock. A popular US charity called Books for Africa distributes donated educational material to schools across the continent. According to its website, it has sent 33m books to 49 countries since 1988, and last year it raised $2.3m (£1.5m) to cover the costs of shipping. It is highly rated by the evaluation body Charity Navigator and has been praised by Kofi Annan.

Surely it stands to reason that a greater abundance of books will result in better educated children, and all the benefits that flow from that? Except that the impact of increasing the number of books in schools has been tested, and, in the absence of teacher training, “providing textbooks has either no discernible effect on children’s school performance, or only a limited effect on the most able students”.

Do you know what does improve educational outcomes, and in dramatic fashion? Deworming. Parasitic infections make children unwell, more likely to miss school and fall behind. Supplying cheap and effective medicine to treat them reduced absenteeism in Kenya by 25%. Ten years later, it was found that the children who had been de-wormed earned 20% more than those who hadn’t. Give to a deworming charity and you’ll stand a real chance of improving hundreds of lives. 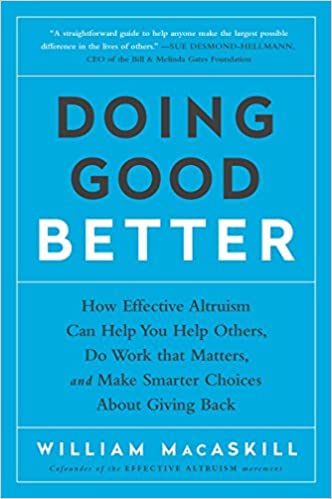 Another key question is: what would happen if I didn’t donate? “Scared Straight” is a much-garlanded approach to reducing teen offending in the United States. You may have seen the episode of Orange Is the New Black where delinquent girls come face to face with their future: the mean women of Litchfield Penitentiary. Again, it makes intuitive sense. You would be scared straight after seeing what might await you in prison, wouldn’t you? And rates of offending do drop among those exposed to hardened criminals. The problem is, they would have dropped further if the kids had just been left alone: a meta-analysis of these kinds of programmes has shown that they can be more harmful than doing nothing. How so? We don’t know for sure, but it could be because some teens feel the need to prove they’re hard enough for the environment they’ve just witnessed.

Doing Good Better has plenty of surprising examples like these. MacAskill convincingly demonstrates ways in which the Fairtrade and anti-sweatshop movements could end up doing more harm than good. He debunks the idea that a virtuous work-life involves putting in long hours at an NGO – sometimes it can be better to seek out a higher wage in order to give more. But none of this is done in a cynical, point-scoring way, and we are shown charities, such as GiveDirectly and the Against Malaria Foundation, that deserve every penny of the money they raise. No, the author is very much an idealist: he has fire in his belly and an urgent desire to make the world a better place. His plea is simply to follow the evidence – and as a result, not to waste a minute or a dollar more.

This article was first published on The Guardian

She is the mystery of light being born into matter

Why do we allow the logic of the market to occupy our minds?

The Hidden World of Fungi

Fungi have long supported and enriched life on our planet. They must be protected as fiercely as animals and plants.

God is a Mother

and with that sentence the world stops

Goodall’s mystical experience occurred in the forest of Gombe

The Death of the Climate Activist

the Anthropocene calls upon a radically new ontology

From Separation to Oneness

From monoculture to diversity

She is the mystery of light being born into matter

Real vs. Fake Shamans, Hallucinogens, and the Dalai Lamas of South America

The Death of the Climate Activist

the Anthropocene calls upon a radically new ontology

Goodall’s mystical experience occurred in the forest of Gombe

An Indigenous Context for Being a Human Being

Why do we allow the logic of the market to occupy our minds?

With Dahr Jamail and Stan Rushworth

Fungal networks, ecology, and us

The Rising Voice of the Feminine - SAND18 US

Mirabai Starr in conversation with the audience at SAND18 US

From Fear to Trust

Bayo talks about youthfulness at the I of the Storm event.

Daniel shares how we can avoid a civilization collapse.

Where to go when the highway no longer leads to interesting places?

God is a Mother

and with that sentence the world stops

With Sará King and Daniel Siegel

Embrace a wider view of who we truly are

The Hidden World of Fungi

Fungi have long supported and enriched life on our planet. They must be protected as fiercely as animals and plants.