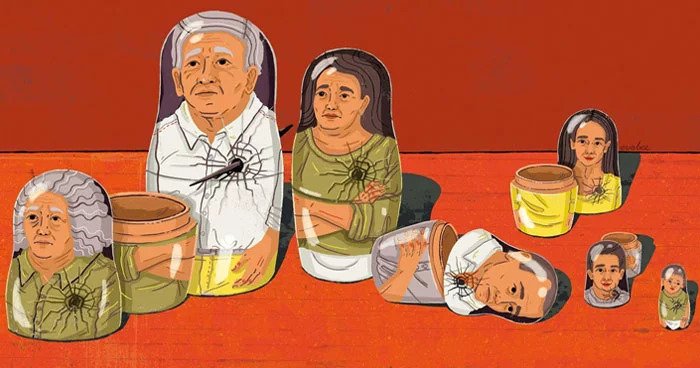 When post-traumatic stress disorder was first recognized as a psychiatric diagnosis in 1980, not everyone believed that trauma could have long-term effects on health. Now PTSD is a medically accepted condition.

But new research showing that the physical effects of trauma can be passed down to children and even to grandchildren is generating just as much heated debate as PTSD did in its early years.

This process, known as epigenetic inheritance, involves changes to the DNA that affect which genes are active and when, without altering the actual DNA sequence.

One 2018 study looked at trauma experienced by Union Army soldiers held in Confederate prisoner-of-war camps toward the end of the U.S. Civil War, when no prisoners were being exchanged between the North and South. Prisoners were subjected to overcrowding and poor sanitation, and were given only small rations of food. Many died from scurvy or diarrhea.

Researchers examined the health records of over 4,700 children whose fathers had been held in these camps, along with over 15,100 children of Civil War veterans who had not been captured.

The mortality rate among the sons of prisoners of war was 11 percent higher than that for sons whose fathers had not been prisoners. The daughters of former prisoners of war appeared to be unaffected.

Researchers also looked at other factors that could have been involved, such as the father’s socioeconomic status or the son’s marital status or occupation. None of these altered the results.

They also tried to exclude other possible explanations, such as fathers having a genetic trait that helped them survive as prisoners, but also increased their sons’ risk of dying early. Or traumatized fathers abusing sons born after the war.

The researchers found that only sons born after the war had an increased risk of dying early, not sons born before their fathers became prisoners of war. This suggests that the traumatic experience led to epigenetic changes in the fathers’ cells that were passed down to their sons.

Other research has found similar signs of epigenetic inheritance in people. One study looked at children and grandchildren of people living in remote Swedish villages that faced shortages of food in the late 1800s and early 1900s.

Children of men who had lived through famine before adolescence had a lower risk of dying from cardiovascular disease. On the opposite side, people whose paternal grandfather had plenty of food during their early years had a fourfold increased risk of dying from diabetes.

Other researchers have focused on children of Holocaust survivors and children of women who were pregnant during the 9/11 attacks. Many of these studies are small, so larger studies will be needed to really understand what is happening.

Most of the debate around epigenetics is not about whether it is real — there are a lot of studies to back it up — but about how it works and what it means for intergenerational trauma in people.

Experiments in mice are starting to fill in some of the blanks. These are easier to do because mice have shorter lifespans, so researchers can more quickly see how epigenetic effects pass from one generation to the next.

In a 2013 study in mice, researchers found that trauma associated with scent could pass to the offspring.

Researchers exposed adult male mice to the scent of cherry blossoms — acetophenone — while giving them small electric shocks on their feet. Over time, the mice learned to associate the scent with pain, even when there was no shock.

The pups of those male mice showed an increased sensitivity to the scent, shuddering more when they smelled it, compared to pups whose father had not been conditioned to associate the scent with pain. This was true even though the pups had never been exposed to acetophenone in their life.

Even the third generation — the “grandchildren” — showed the same increased sensitivity to the scent. This sensitivity only occurred with acetophenone, not other scents.

The sensitivity, though, was not identical to the reaction that the fathers had to the scent. This is one key difference between epigenetic inheritance and traditional genetic inheritance, which passes traits on exactly as they are.

The mice that were sensitized to acetophenone, along with their descendants, also had brain changes related to detecting the scent. This included a greater number of neurons that produced receptor proteins to detect acetophenone, as well as larger structures that relay signals from the sensory neurons to the brain.

The researchers think that DNA methylation may explain how this sensitivity to the scent is passed on. Methylation is a chemical modification of DNA that prevents a gene from being expressed. It leaves the DNA sequence untouched, though, and it is also reversible.

Other mechanisms for epigenetic inheritance have been proposed, including changes to histones. These are proteins that act as a scaffold for DNA, but also control which genes are active.

RNA molecules are another possibility. RNA is made from DNA. Some are turned into proteins in the cells, while others are involved in regulating which genes are active.

In a 2018 study, researchers found that pups of mice exposed to trauma — in this case, separation at birth from their mothers — showed symptoms of this trauma. This included eating more and taking more risks.

The researchers isolated regulatory RNA molecules from the sperm of mice who had experienced this trauma. They then injected these molecules into the embryos of mice whose parents had not undergone early-life trauma.

The pups that grew from these embryos showed the same changes in behavior as pups whose parents had experienced the trauma.

The field of epigenetics is still in its early stages, so more research is needed to fully understand how it works. Some results, though, already suggest a bright side. The Swedish study, for example, found a heart-protective effect on children whose fathers had eaten less as children.

In the cherry blossoms study, researchers found that they could desensitize mice to the smell by exposing them the acetophenone without giving them a foot shock. This showed up in their sperm — the mice had lost the epigenetic signature associated with the fear-scent response.

If trauma passes in people in similar ways, it may be possible to undo some epigenetic effects by using techniques like cognitive behavioral therapy. This could help break the cycle of trauma that can affect people across generations.