"There is a great mystery in the metamorphosis that brings a lowly caterpillar to the majesty of the winged creature that emerges from a chrysalis. Since ancient times, humans have used the emergence of butterflies to symbolize the wonder of life's capacity to completely transform. For thousands of years, humans have looked to butterflies as a reassuring symbol in times of change.

Yet at this moment, when the entire Earth is in the throes of an uncertain transformation, butterflies have become a symbol of loss rather than renewal, an evidence of collapse rather than redemption. Monarch butterflies migrating south from California must now pass through areas where native habitats are already 95% diminished by modern culture and human interference.

Many migrating butterflies find refuge at a nature preserve that sits at the southern tip of Texas, facing the border with Mexico. For decades, the National Butterfly Center has served as a nature sanctuary along the banks of the Rio Grande River. Nature enthusiasts travel great distances to watch the delicate creatures float over the wildflowers in what many have called a magical place.

In recent years however, the butterfly center has been thrust into the news and caught in the storms of conflict over immigration policies at the border. Strange as it may seem, it has now also become a landing place for wild conspiracy theories that border on insanity.

The troubles began when then president Trump ordered a section of border wall to be built right through the National Butterfly Center in order to the migration of “illegal aliens.” What began as a legal battle over this “butterfly wall,” has recently morphed and escalated as extremists began posting and pushing conspiracy theories about the nature center. The new attack claims that the butterfly refuge is secretly run by “left wing thugs with a sham butterfly agenda.”

Extremist groups have asserted, without any evidence, that pedophilia and rampant sex trade were taking place on the property along with illegal migration. A rapid escalation of online and in-person harassment of the sanctuary staff soon followed. Recently, increasing threats of violence by far right extremists and Qanon conspiracy followers have caused the butterfly center to close indefinitely.

It seems hard to exaggerate the distortions occurring when butterflies become the center of a controversy promoted by those who deny reality and refuse to accept the need for meaningful cultural change and healing at this time. Part of the irony includes the fact that butterflies are not migratory in the sense of human migrants who might, for any number of reasons, be crossing borders and boundaries. Rather, the migration of butterflies demonstrates the interconnectedness of everything and everyone as well as the capacity of life to continually transform and renew.

Those so fiercely threatening violence at the gates of the butterfly center may be caught in a nightmare of their own making. Yet, there is also a nightmare quality to being alive at this time when radical changes place extraordinary stress upon each person. Reports of climate crisis and all manner of cultural upheavals cannot simply be contained by the individual psyche, nor can they simply be dismissed. As the web of life loosens amidst rapid changes, everything can become psychically charged, as if some collective process of shedding and recovery has to happen before a meaningful transformation can occur.

The word psyche, often used to indicate the human soul or spirit, derives from a Greek root that means butterfly or night moth. Just as butterflies go through phases of darkness and even disintegration before they can manifest their intended beauty and wonder, the psyche of humanity now seems to be suffering stages of darkness and dissolution on the way to a greater awakening.

Butterflies can appear to be delicate and changeable like the human psyche; yet they are also hardy and determined as they undertake epic migrations. Indigenous tribes of the American Southwest particularly revered butterflies whose exquisite presence was considered a miracle, not just of transformation, but also resurrection. The current journey of humanity involves returning to essential connections to our own nature and thereby to great nature; but also to the core mystery of life, death, and renewal, symbolized since ancient times by the metamorphosis of the butterfly." 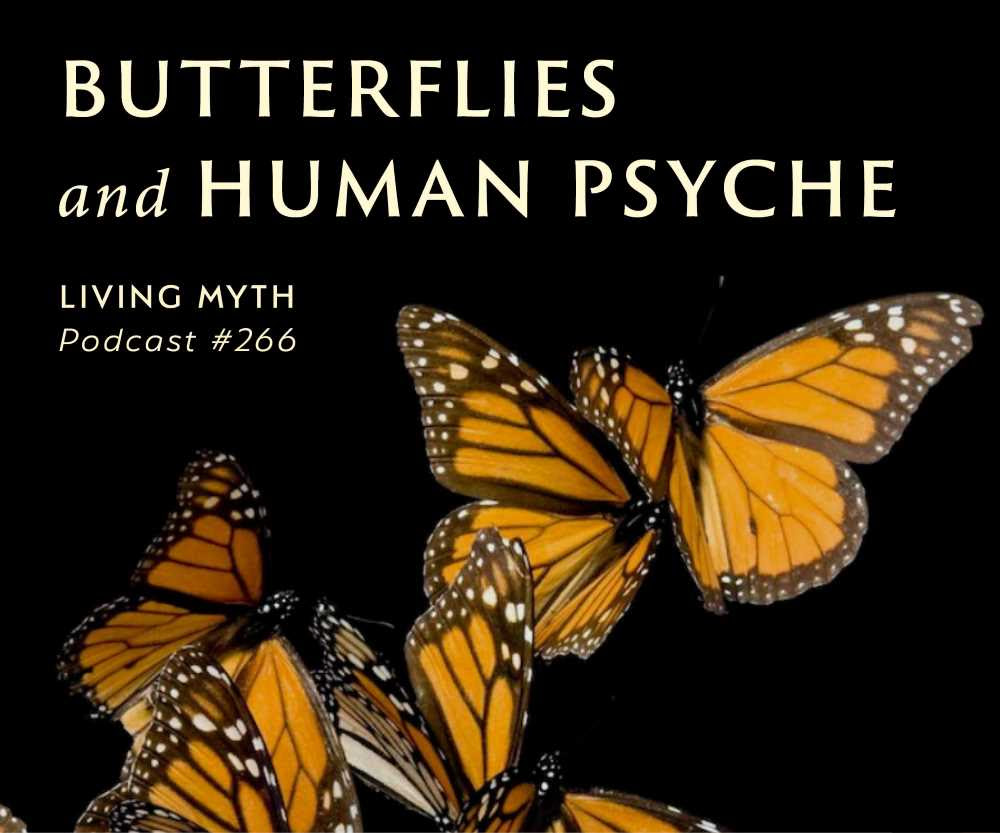 From The Living Myth Podcast Episode #266 with Michael Meade