Beloved I Am Listening

Reflections On The Vijnana Bhairava Tantra

This is Part 2 of a series. Read Part 1 here

The first verse spoken by the Goddess in the Vijnana Bhairava Tantra is one of the most enchanting phrases I ever heard in any language:

Whisper this to yourself quietly. Let each word pulsate from the silence, through the levels of your being, and back to the silent pulsation. Treat each word as a mantra, humming with music and rich in resonance.

On one level we could hear this as something like, “Beloved, I am listening to the Songs of Creation.” Or, “Shining One, I have heard that which has emerged from the intercourse of Rudra and his Shakti.” We can also hear this as, “I have been listening to the Rudrayamala Tantra.” These sixteen mellifluous syllables are intended to set all kinds of strings vibrating in your heart and soul, and your body and mind.

Sanskrit is an English word, from saṁskṛta, “constructed, perfected, initiated, adorned, highly elaborated.” Sanskrit is a divine language, the language of the gods. And the gods are at play – deva means the gods and also “sport, play.” Therefore if we think in Sanskrit a little, let ourselves in on the secret, the whole atmosphere becomes playful and sacred at the same time. Divine laughter.

Sanskrit is legendary for its ability to encode puns, multiple meanings, and humor into even very brief statements. One of the terms for this richness is śleṣa, defined as “connection, junction, union, sexual union, embracing, an embrace, a pleasing combination of contrasted ideas, words having a double meaning, ambiguity, paronomasia, pun.” And paronomasia in turn refers to “word play,” the use of a word in different senses or the use of words similar in sound to achieve an effect such as humor or dual meaning. Sanskrit often goes beyond double entendre to triple and quadruple entendre, as we shall see. 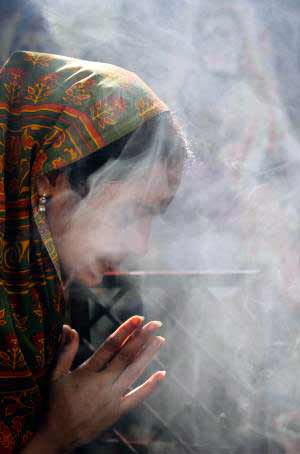 Before we go any further, let’s mentally make offerings of divine ambrosia to all Creation, so that the Goddess and Shiva, and the ancient seers, and all the custodians of this text, are totally inebriated on celestial elixir and will bless us. Manasa Puja is mental worship, held to be as valid as actually doing an external ritual – you can just quickly visualize making generous offerings. So let us offer oblations to Bhairavi, Bhairava, and all of the sages and wisdom women of all time. Whew. Bartender! Keep the amrita, the nectar of immortality, flowing.

Now let’s look at the dictionary entry for each word of this first phrase. Let’s savor the meanings, images, and metaphors that are mentioned and then rearrange them into something a bit more readable. These are abbreviated listings from the Monier-Williams Sanskrit-English Dictionary – keep in mind that the full meaning of each word is quite extensive. We only are only capable of hearing a small part of the song that the Goddess and God are singing to each other.

śruta – “Heard, listened to, heard about or of, taught, mentioned, orally transmitted or communicated from age to age. Known, famous, celebrated. That which has been heard, especially from the beginning. Knowledge as heard by holy men and transmitted from generation to generation. Oral tradition or revelation, sacred knowledge, the Veda, the act of hearing. Learning or teaching, instruction. Memory, remembrance.” The root śru is “to hear, listen to, attend to, give ear to.”

So already in this one word of two syllables, the Goddess has invoked the song of the universe, for the Vedas are the self-existing songs resonating in the ethers and heard by seers.

I have heard that which has been transmitted

from the beginning of the universe,

the song of creation.

I have heard the song that is reverberating everywhere in Creation.

I hear the echoes of our lovemaking

Manifesting as knowledge humans can hear. 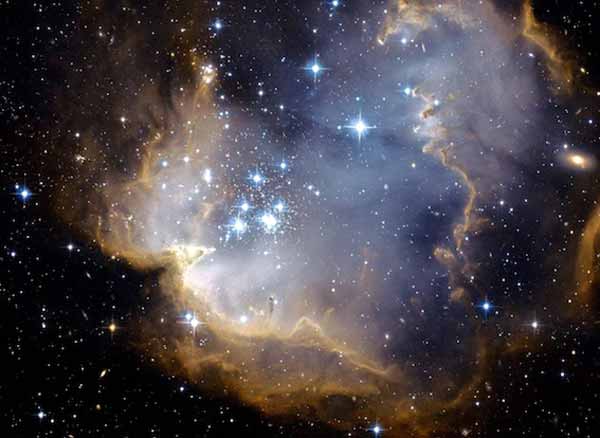 The Goddess has incarnated into the level of listening to the reverberations of creation, and She is speaking from there, and inviting us in.

Deva – heavenly, divine, a deity, god. The gods as the heavenly or shining ones. Sport, play. An organ of sense.

One of the names of the Goddess is Devi (devī), who is speaking to her other half, calling him Deva, inciting a conversation. “Shining one, You who are the sense organs of eternity and infinity, shall we play? Are you up for a little sport?”

If we wanted to, we could hear mayā as word play (śleṣa), with the similar sound māyā. Only a slight difference in sound distinguishes mayā, the first person pronoun, from māyā, “Creating illusions. Art, wisdom, extraordinary or supernatural power. Magic, a magic show.” Māyā is also a name or appellation of the Goddess. So we could hear this as, “by me,” and we can hear the word play as,

I am art, I am wisdom, I am magic. I am supernatural power.

Sarvam - whole, entire, all, every, of all sorts, manifold, various. Altogether, completely, in all parts, everywhere.

I am listening to the Song of Life reverberating everywhere.

Rudra - crying, howling, roaring, dreadful, terrific, terrible, horrible. Running about and roaring. Howler. Driving away evil. The god of tempests. Ruler of the Rudras. Ruler of the Maruts, “the flashing, shining ones, the storm gods.” In music, a kind of stringed instrument, a kind of lute or guitar.

This sounds like Heavy Metal – “roaring, terrific, terrible, howling guitars.” The sound of storm gods, accompanied by a light show of lightning and thunder. The Goddess is calling her lover by one of his ancient names, Wild One. This sounds like a woman speaking to a man, a Goddess saying, “Bring me your wildness.”

Bring me your primordial wildness that matches my wildness, like a cosmic storm.

The gods embody their own opposites, so Rudra is Wildness and Calmness at the same time. Wild Serenity.

Rudra is invoked in the Rig Veda, in a series of hymns that Devi alluded to with her first word, shrutam. Some people consider Rudra to be another name of Shiva. Here all of a sudden we are in the realm of the untranslatable. There is simply nothing in English, short of a series of very long books, that could describe the word Rudra. But let us go ahead anyway. Because this is the Goddess singing to her Lover, if we allow the rich imagery in the Hymns to Rudra in the Rig Veda, we could hear her saying,

Beloved Wild One, strongest of the strong, I am speaking to you,

You who come to me bearing lightning.

Mighty One, your touch is wonderfully healing,

The most comforting touch in the universe.

Come to me, my impetuous one.

This is only a tiny bit of what is invoked by the word Rudra, is we let some of the images in the dictionary and in the Hymns to Rudra come out to play.

Yamala - twin, paired, doubled. A singer in a duet. Name of the number “two.” Twins, a pair, a couple.

You to whom I am joined in love, united in this duet1.

Rudrayamala (rudrayāmala) is listed on page 883 of the Monier-Williams as “The name of a tantric work in the form of a dialogue between Bhairava and Bhairavi.” 2 Devi is placing this current conversation that she intends to start in the context of her ongoing talks with her lover.

My lover. You who contain me. You who are my very soul, my being.

I have heard the Songs of Creation emerging from the Union of our two energies.

So you can see that the “literal,” dictionary definition of a word in Sanskrit often sounds like a juicy, raucous poem, a wild and far-ranging hymn to the joy of existence. We can let the meaning be as wet or as dry as we prefer. The Goddess is saying, “Heard I have, my Shining One, the song of revelation that has been brought into existence by our sexual intercourse.” At the same time, She is saying, “I have heard all and everything contained in the Rudrayamala Tantra, the beloved text that sings of the way of union with the Supreme Spirit through meditation.”

The Vijnana Bhairava Tantra makes good use of the poetic toolkit of Sanskrit and we honor the text when we savor all these delicious nuances. These sixteen syllables are engineered to give fresh and refreshing revelations every day, for as long as you are entertained to listen to them. This is only half of one verse, and the text consists of 162 verses. It is astounding that this text exists at all and has survived the ravages of time and history. Through its existence in the human realm, the Goddess is saying to us, “You who have ears to hear, come listen in to this song of love and wonder, which is always resonating everywhere in creation, and in your body and heart.”

Lorin received his Ph.D. in Social Science from the University of California at Irvine in 1987. His doctoral dissertation was on the language meditators come up with to describe their experiences and the maps they make to navigate their inner worlds. His Master’s Degree work focused on the hazards of meditation and the crisis points in a meditator’s development.

The Vijnana Bhairava Tantra is a classic meditation text that describes 112 doorways for entering divine awareness right here in the midst of everyday life. Lorin was introduced to the Vijnana Bhairava Tantra in 1968 while working in a physiology lab at the University of California that was doing research on meditation. It was love at first listening, a love that continues to this day, this moment.

The Vijnana Bhairava Tantra appeared in Kashmir around 800 AD, as far as we can tell. The tantra is set as a conversation between The Goddess Who is the Creative Power of the Universe, and the God who is the Consciousness That Permeates Everywhere. For short, they call each other Devi and Bhairava, or Shakti and Shiva. They are lovers and inseparable partners, and one of their favorite places of dwelling is in the human heart. The text is friendly, inviting us in to play.

Lorin’s version of the Vijnana Bhairava Tantra is called The Radiance Sutras, published by Sounds True (2014). Check it out at radiancesutras.com

This article first appeared in The Sutra Journal