The Dalai Lama and the Atlas of Emotions

First published in May 2016

The Dalai Lama helps chart the territory of emotion.

“When we wanted to get to the New World, we needed a map. So make a map of emotions, so we can get to a calm state.”
Emotions are tricky entities. They confuse the mind and disturb perception, isolating an individual in a private sense of reality. So what to do with them? A type-cast, non-dual stance has been to banish feelings and emotions to the Neverland of illusion. They’re not real. Don’t trust them. Disown them. Now, the Dalai Lama has teamed up with Dr. Paul Ekman, his daughter Dr. Eve Ekman and a top team of psychologists to suggest otherwise. Emotions are the territory we live in: they are here to be navigated, and to navigate them, we need a map. 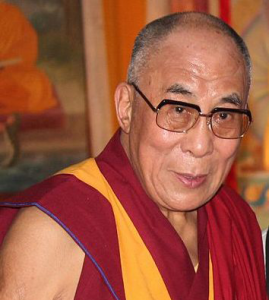 As Matt Lucia recently wrote: “Out of the very intelligent need to escape, we unfolded unique strategies of fight/ flight/ freeze, to take us out of dysregulating states of intense vulnerability and groundlessness, and away from the overwhelming aliveness of the somatic and emotional worlds.” To say it more simply, we have been conditioned to fear and feel ashamed about our emotions. Responding to pressing psychological need, however, voices from the nondual community are increasingly calling for greater compassion towards our own emotions (and those of others), as vehicles of human wholeness.
In the words of Jeff Foster, “It’s becoming clearer that the real adventure, the real beauty and joy of life, lies not in being ‘nobody’, in detaching yourself from the world, in numbing yourself to feelings and denying emotions, in endlessly parroting spiritual clichés such as “there is no me” and “everything is a story”… but in rediscovering your deep humanity, in being a person again (yes, a person!), in fully engaging with life from a place of vulnerability and deep acceptance, in dancing with so-called ‘relative existence’.

But how to navigate the fields of emotion among us? Must emotions be first identified and honored in order to be seen and surrendered?

An Atlas of Emotion

In an unprecedented move, the Dalai Lama recently joined forces with top psychologists of the Western world to map out this touchy-feely emotional territory. The motive? If we can navigate our emotions with grace, then we have more of a chance to remain in a state of calmness. The result is a fascinating online Atlas of Emotions, a 21st century tool for anyone feeling horrible to literally navigate their way through the contractions and repressions of living energy.

As a first step, a survey was carried out of 149 scientists (emotion scientists, neuroscientists and psychologists who are published leaders in their fields) to ascertain a consensus about the nature of emotions and the moods or states they produce.

The survey led to the conclusion that there are five categories of emotion: anger, fear, disgust, sadness and enjoyment; each with an elaborate subset of emotional states, triggers, actions and moods. Enjoyment? Yes, even emotions of joy and compassion, can disconnect us from calmness. According to the list of psychopathologies written in the Annex, joy can get fixated as Mania and/or Cyclothymia. 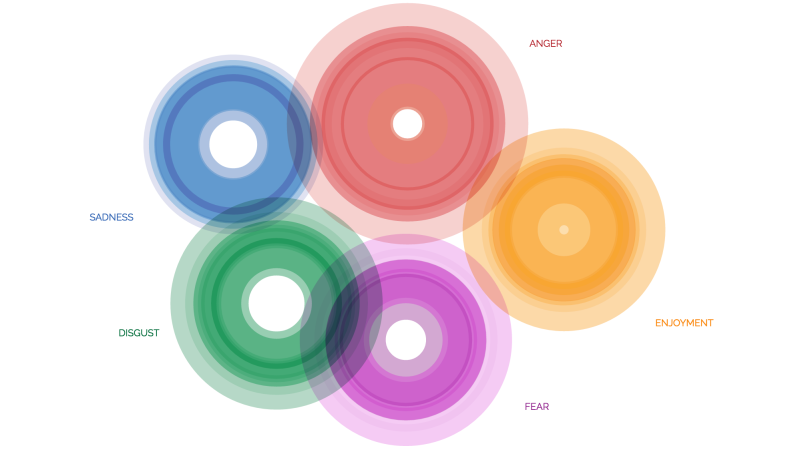 The interactive map lets you click through emotional phenomenon: from identifying one of the five key emotions (such as anger) through to exploring its range of layers and expressions.

The range of anger, for example, goes from a low intensity annoyance, to frustration, exasperation, argumentativeness, bitterness, vengefulness and on to full blown fury. Anger (“We’re angered by interference”) can also be clicked through to examine its common actions (insult, quarrel, be passive aggressive) and its triggers (such as rejection, mindless bureaucracy, and more). At the Annex of the Atlas, phenomena get more clinical, with listings of personality traits, psychopathology (such as antisocial personality disorder, otherwise known as sociopathy) and ‘signal and message’. The message citation for anger for example, is listed as: “Get out of my way.” Anger can carry a message ranging from dissatisfaction to threat.”

The backdrop to all the varied continents, valleys, peaks and rivers of emotion detailed within the interactive Atlas is calmness. “A calm, balance frame of mind is necessary to evaluate and understand our changing emotions. Calmness ideally is a baseline state, unlike emotions, which arise when triggered and then recede,” says the Atlas. In a sense, calmness is the new stillness, a nondual position from which to navigate troubled waters of emotion.

“Exploring the Atlas may increase people’s understanding of this vital feature in their life,” writes Dr. Paul Ekman who compiled the Atlas together with his daughter, Dr. Eve Ekman, through dialogues with the Dalai Lama and with funding from the Dalai Lama Trust. “We hope that teachers will use the Atlas in classrooms and that educators and therapists will use it with their clients to better understand themselves.”

“When we wanted to get to the New World, we needed a map. So make a map of emotions so we can get to a calm state,” the Dalai Lama told Dr. Ekman, according to the New York Times.

Paul Ekman met the Dalai Lama on the impetus of his daughter, Eve, who has a long-term fascination with Tibet. “From nearly the first moment that we met, I had a déjà vu experience, as if I had known the Dalai Lama all my life, as if he were the brother I never had,” says Ekman, one of America’s most pre-eminent psychologist and a co-discoverer of micro expressions with Friesen, Haggard and Isaacs. “This seemed very strange to me. I later learned from the Dalai Lama that he had the same feeling. He did not regard this at all strange because of his belief in reincarnation.”