“The emptiness of existence (…) finds its expression (…) in the flitting present as the only manner of real existence; in the dependence and relativity of all things; in constantly becoming without being”

“Of every event in our life it is only for a moment that we can say that it is; after that we must say forever that it was. (…) It would probably make us angry to see this short space of time slipping away, if we were not secretly conscious in the furthest depths of our being that the spring of eternity belongs to us”

“With the disappearance of willing from consciousness, the individuality is really abolished also, and with it its suffering and sorrow. I have therefore described the pure subject of knowing, which then remains over as the eternal world-eye. This eye looks out from all living beings (…) It is thus identical with itself, constantly one and the same”

You would be forgiven to think that the passages quoted above are by some eastern nonduality sage, the fruits of a lifetime of meditation and letting go of the ego. But they have, in fact, been written by one of western philosophy’s greatest exponents, Arthur Schopenhauer, in the first half of the 19th century. Indeed, Schopenhauer’s profound insights—echoing eastern nonduality as they undeniably do—can be placed squarely in the western philosophical tradition, with roots in naturphilosophie, German idealism and a direct link to Immanuel Kant’s west-defining work.

As the West eagerly explores Advaita Vedanta, Kashmiri Shaivism, Yogācāra Buddhism and a number of other eastern traditions, the West’s own native philosophy of nonduality remains largely undiscovered. Decades of systematic misunderstanding and grievous misrepresentation by academics certainly haven’t helped. For instance, Schopenhauer’s metaphysics has been described by Prof. Christopher Janaway—perhaps the most recognizable Schopenhaurian scholar alive today—variously as “fanciful,” “ridiculous,” “embarrassing” and even “barbaric;” something “so obviously flawed that some people have doubted whether he [Schopenhauer] really means it.” How could any philosophy achieve its deserved renown under such sweeping and crass mischaracterization?

Upon failing to understand Schopenhauer, Janaway concludes that it is the former—not Janaway himself—that “seems to stumble into a quite elementary difficulty.” Such an attitude is rather typical of western academic hubris towards ideas that don’t fit its expressly dualist subject-object paradigm. For this reason, Schopenhauer is best known today for—of all things—his ostensive pessimism and misogyny. Yet, however true both charges may be, they do not change the fact that Schopenhauer’s introspective insights are one of the greatest intellectual and spiritual achievements in the history of the West; a treasure buried in our backyard, which we have tragically been largely oblivious to for over two centuries.

But now we have a new opportunity to rediscover what is ours, for the benign influence of eastern nonduality in the West may have opened the space and created the receptiveness necessary for the recognition of Schopenhauer’s message; it may have finally given us the tools—the language—to fathom and appreciate a line of reasoning and insight that has eluded presumed experts for decades. For the sake of the West’s own sanity, we must grab this opportunity and reconnect with our own roots, recover our own western spiritual identity.

Indeed, Schopenhauer conveys his ideas not through Kōans or meditation exercises, but a kind of logical reasoning—this most archetypically western of all things—so hypnotic in its pace, coherent in its approach and persuasive in its conclusions that, remarkably, similar results can be achieved. Reading Schopenhauer is a kind of meditation, but one that leverages the West’s own inherent dispositions, strengths, style, language, references and metaphors. His metaphysics reflects the wisdom of our own heritage.

Schopenhauer’s prose is widely praised for its clarity and matter-of-factness. He writes almost as if he were talking to the reader in person, dispensing with the embellishments and formalisms typical of the academic literature of his time. Admittedly, however, this favorable assessment is born out of comparisons with the impenetrable writings of other late 18th and early 19th century philosophers, such as Georg Hegel. In relation to present-day literature, Schopenhauer’s prose is somewhat heavy and longwinded. He uses long sentences, constantly recapitulates material already discussed and—trickiest of all—implicitly attributes context-dependent meaning to key terms. For instance, what he means by the word ‘consciousness’ (‘Bewußtsein’) varies slightly—though significantly—depending on where the word occurs in his text.

Particularly for the latter reason, modern readers often find Schopenhauer ambiguous and self-contradictory. Neither charge is actually true, but acquaintance with present-day analytic philosophy and cognitive psychology may be necessary to clarify things: Schopenhauer is so far ahead of his time that he matter-of-factly anticipates ideas—such as metacognition and core-subjectivity—that have become part of our conceptual lexicon only in the past few decades.

In this context, to help make Schopenhauer’s metaphysics more accessible I’ve written a concise book where I try to disambiguate his terminology usage, make explicit the overarching argument line that underpins his various claims, and clarify the ideas of present-day analytic philosophy and cognitive psychology that Schopenhauer anticipates. In what follows, I reproduce a hopelessly incomplete summary of his metaphysics—used in the beginning of my book—in the hope of arousing your interest to study him further.

Schopenhauer’s philosophy is characterized by a partition of the world into two categories, which he calls ‘Will’ and ‘Representation,’ respectively. The latter is the outer appearance of the world: the way it presents itself to our observation. The former, on the other hand, is the world’s inner essence: what it is in itself, independently of our observation.

Indeed, for Schopenhauer the Will “is the being-in-itself of everything in the world, and is the sole kernel of every phenomenon,” whereas Representation is merely the “Will become visible” or “translated into perception.” Representations without underlying Will would be “like an empty dream.” There is nothing more fundamental than the Will, the “inner nature” of everything, for, as Schopenhauer repeatedly affirms, “The Will itself has no ground.”

Schopenhauer is a metaphysical idealist with regard to the physical world—i.e. the world of material objects interacting with one another in spacetime, according to causal laws. For him, this physical world exists only insofar as it consists of images—that is, Representations—in the consciousness of the observer. It has no existence beyond this observer. He writes that:

“things and their whole mode and manner of existence are inseparably associated with our consciousness of them. (...) the assumption that things exist as such, even outside and independently of our consciousness, is really absurd.”

A ‘thing’ for Schopenhauer is a physical object with a certain form, occupying a position in spacetime and obeying causal laws. Unambiguously, he then claims that:

“the demand for the existence of the object outside the Representation of the subject (...) has no meaning at all, and is a contradiction (...) therefore, the perceived world in space and time (...) is absolutely what it appears to be.”

That the physical world is what it appears to be means that it is made of perceptual qualities such as color, tone, flavor, odor, etc.—that is, it is constituted by the perceptual experiences of the observer. And that’s all there is to it. There is no consciousness-independent physical world outside observation, comprising separate objects with definite form, physical properties and position in spacetime.

However, Schopenhauer doesn’t stop here. He posits that behind the Representations—that is, underlying the physical world we perceive around us—lies the world-in-itself, which is “completely and fundamentally different” from what appears on the screen of perception. This world-in-itself is what remains of the world when it is not being observed—that is, when it is not being represented in the consciousness of an observer. The “forms and laws” ordinarily discernable through perception “must be wholly foreign” to the world as it is beyond perception. In other words, the world-in-itself is not physical; in it there is no space, time or causality, which are themselves merely modes of perceptual experience.

And although Representations—that is, our perceptions—are also experiential, God’s inner experiences are qualitatively different from what we experience while perceiving them: we don’t experience God’s will as it is in itself, but solely as it presents itself to us—that is, as matter. In other words, what it feels like to be the world—to be God—is different from what it feels like to perceive it. Unsurprisingly by now, this lines up perfectly with Nisargadatta Maharaj’s words: “When you see the world you see God. There is no seeing God apart from the world. Beyond the world to see God is to be God.”

As insightful and coherent as it is, this chain of ideas is so alien to Janaway’s dualist references that he is utterly incapable of accepting what Schopenhauer means by the word ‘Will’: “we must enlarge its sense,” Janaway argues, “at least far enough to avoid the barbarity of thinking that every process in the world has a mind, a consciousness, or a purpose behind it.” Really?

Despite Janaway’s bewilderment, there is no mystery here: Schopenhauer explicitly defines the Will as “what is known immediately to everyone” through introspection, whereas “consciousness alone is immediately given.” So the Will can only be consciousness. Everything else is only accessible through the mediation of Representation.

Schopenhauer explicitly links the Will to endogenous experiences accessible only through conscious introspection:

“what as Representation of perception I call my body, I call my Will in so far as I am conscious of it in an entirely different way (…) the body occurs in consciousness in quite another way, toto genere different, that is denoted by the word Will.”

As such, we, too, are essentially Will, bits of God that have become seemingly separated. Our physical body is merely how our inner experiences—particularly those of a volitional nature, such as desire and fear—present themselves to outside observation. The matter of our body is simply the “Will become visible;” there is nothing more to it. And, by the same token, the matter of the inanimate universe we inhabit is merely the transpersonal Will—God’s will—become visible. Ultimately, thus, there is only Will or universal consciousness.

For Schopenhauer, the meaning of life is to help the Will—God’s inner life—to become aware of itself through our very human but unique capacity for self-reflective observation. He writes:

“Through the addition of the world as Representation, developed for its service, the Will obtains knowledge of its own willing and what it wills.”

In the process of doing so, we suffer, for the Will strives “blindly”—instinctively—towards self-awareness, oblivious to the costs. Schopenhauer’s recipe for reducing or eliminating this suffering is a very Buddhist one:

The idea is that our personal volition is the source of all suffering. Only by taking energy away from our desires and fears can we stop suffering. And this, in turn, is only achievable when we see through our suffering by means of intelligent, self-reflective introspection.

These are just brief snippets of a formidable body of work entailing both formal metaphysics and profound introspective insight. Schopenhauer’s corpus is a treasure lying at the heart of the West, yet largely ignored by the West. As we busy ourselves trying to attain enlightenment through paths developed in the East, we miss one meant for ourselves, developed by a person much like ourselves. It is time we changed this and reclaimed what is ours. May this little essay be a helpful first step. 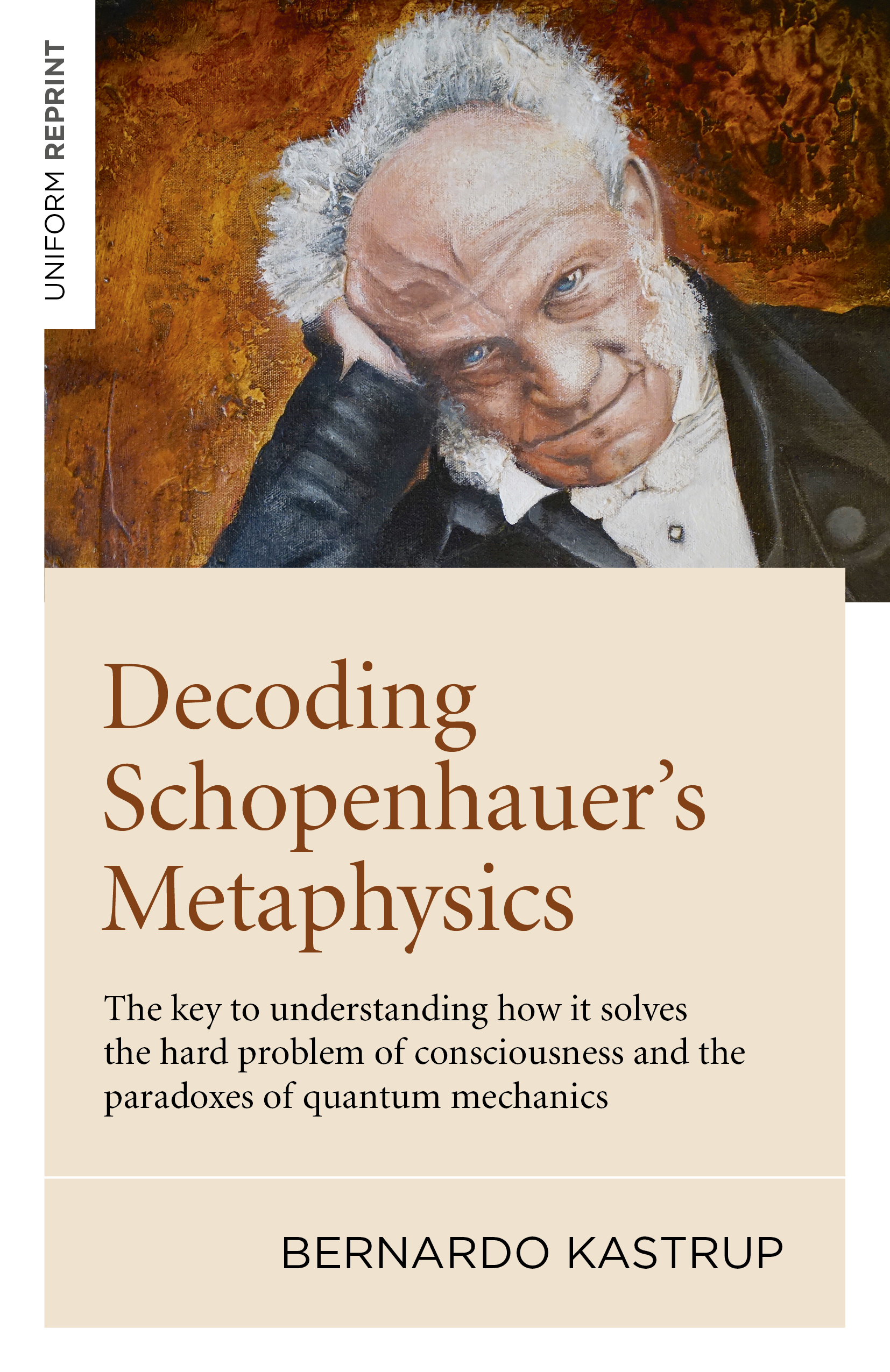 Quotes from Christopher Janaway are from his book, Schopenhauer: A Very Short Introduction, Oxford University Press (2002).

The quote from Nisargadatta Maharaj is from his book, I Am That, Chetana Publishing (1973).