Art & Spirit in Mathematics: The Lessons of Japanese Temple Geometry (part I) 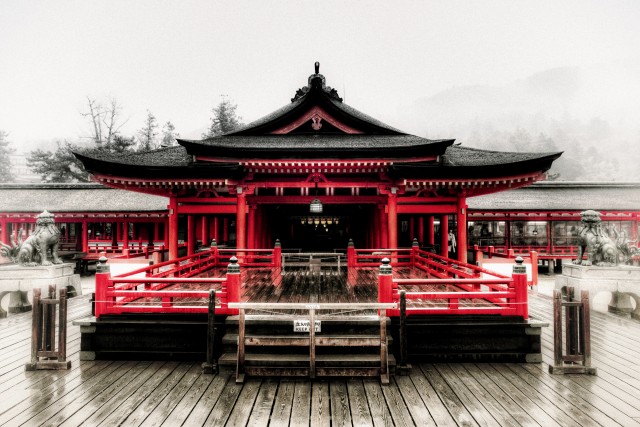 Imagine for a moment being in a church where mathematics groups meet regularly to solve geometry problems and to pose new ones, to learn new tools for solving intractable ones, and to celebrate beauty that is intellectual, artistic, and spiritual. It may be hard for you to imagine, for mathematics plays such a different role in our culture. We have to enlarge our understanding of mathematics to admit such a possibility, which is one reason why it is so interesting to study Japanese Temple Geometry (JTG). JTG was a sophisticated mathematics whose development, from the 17th to the 19th century, was centered in Zen and Shinto temples, during the period when Japan had closed its borders to Western influence. As an ethnomathematician trained in mathematics, I have come to believe that mathematics is profoundly influenced by culture. Through this realization (and others), I have lost the dualist faith in the transcendental and absolute nature of mathematics into which I was socialized as a student.

The example of JTG might free us to look at mathematics with more than our logical minds, and see in it aesthetic dimensions of beauty, and spiritual dimensions of deep meaning. We’ll move from the general to the particular. Part I is a historical sketch of JTG with musings on what we can learn from its example. We’ll see how math can develop in other ways, and how such differences can even impact issues of war and peace. Part II takes a close look at three Temple Geometry problems, in an unusual context, meant to encourage you to approach them open to resonances beyond the disembodied intellect of the math classroom. Each problem is introduced through one or two slides from an art project that has occupied me over several years, now called: Japanese Temple Geometry on Beautiful Trees. The art slides are followed by presentations of the problem and of its solution. My hope is that the aesthetic-spiritual dimensions will not get lost if and when you dig into the math.

Part I. The Lessons of Japanese Temple Geometry
When I first heard the phrase “Japanese Temple Geometry” (JTG) from my Goddard student Rowen Olson, I imagined a relevance of the Golden Ratio to the design of Zen temples, a watered down “sacred geometry”. I was delighted to find that my assumption was totally wrong, that this was the real thing: serious geometry practiced in temples as a sacred art for hundreds of years. Soon I was reading Fukagawa and Rothman.

And, for devotees of the Golden Ratio, we use it essentially in Problem B of Part II.

While I am an ethnomathematician and a mathematician, I am not a historian, know no Japanese, and almost all of my knowledge of JTG comes the wonderful book that my student had found: Sacred Mathematics: Japanese Temple Geometry, by Fukagawa Hidetoshi and Tony Rothman, published by Princeton University Press in 2008. Fukagawa, a high school math teacher, devoted much of his life to recovering and retelling the disappearing story of JTG, and to finding and conserving the surviving sangaku, the wooden panels on which the Temple Geometers painted their diagrams along with calligraphy describing the problem. We’ll give a thumbnail sketch of the story of JTG that Fukagawa and others are telling, but first, spend some time looking at a beautiful sangaku: 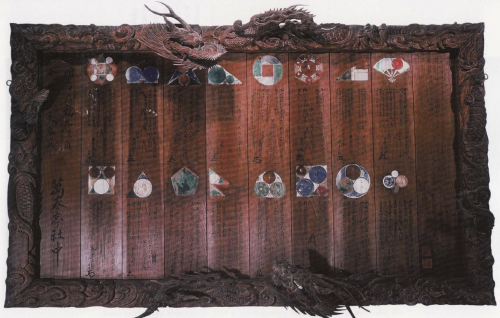 This beautiful sangaku holds sixteen problems. It was made in 1873, when JTG was already in decline, having been banned from the schools a year earlier. (Plate 5 in Sacred Mathematics)

Portuguese traders arrived in Japan in 1543, and a few years later Jesuit missionaries, starting with Francis Xavier, began their work of conversion. After several decades the movement took off and by 1580 the number of Christians peaked at over 100,000. Then a long period of repression began. By 1635 the cathedrals and Bibles had been destroyed, the converts who had refused to renounce their faith had been martyred, the missionaries were gone, and the borders of Japan would remain closed to Europe (and later the USA) for over two centuries.

The Jesuits brought two essential books: the Bible and Euclid’s Elements. Euclid was recognized as a kindred spirit, and geometry became a national pastime, a practice whose perceived spiritual and aesthetic qualities brought it to prominence in Zen and Shinto temples. It is an interesting reversal that as Bibles were burned, the learning of the Elements was brought into the temples. Japanese Temple Geometry flourished as the major cohesive strand of Japanese mathematics for more than two centuries. During this period, mathematics in Europe and Japan developed in complete isolation from each other, after having started, thanks to the Jesuits, with pretty much the same basic knowledge. It was an experiment that might have been dreamed up by an ethnomathematician.

The experiment began to wind down in 1854, when Commodore Perry’s gunboats (depicted here in an American painting and a Japanese cartoon of the “black ships”) sailed into Tokyo harbor and successfully demanded that Japan open its borders to trade.

This opening brought the two mathematical traditions into a slow collision.

After the humiliating capitulation to Commodore Perry’s manifestly superior war technology, Japan gradually resumed cultural contact with the West and learned of the power of calculus. When it was understood how Western mathematics had enabled the gunboats, a sense of disgrace focused on the mathematicians who had “fallen behind”. JTG became associated with weakness. Everyone was to learn calculus. By 1872 the teaching of Temple Geometry in schools was officially banned. The national fascination with geometry faded and the sangaku were removed from the temples. Most were discarded or recycled.

Temple Geometry faded from memory—a shameful episode best forgotten—but in recent years it has been rehabilitated. The surviving sangaku panels, about 900 of them, are being conserved, and the amazing story of a culture profoundly in love with geometry is being unearthed. This movement has been led Fukagawa Hidetoshi, a high school mathematics teacher, who wrote the first modern history of Temple Geometry and then collaborated with Tony Rothman in translating it into Sacred Mathematics. Rothman, a physicist who loves geometry, added a wider perspective and much new material to this elegant and groundbreaking volume.

The story of JTG that we are telling, taken largely from Fukagawa and Rothman, has its critics. Alexander Bogomolny, an ardent lover of the mathematics of Temple Geometry, is skeptical of its broader social and spiritual significance (see his wonderful geometry website Cut-the-knot.org). In judging this issue on the side of Fukagawa and Rothman, I am reminded that monks in medieval Europe studied Euclid as a way of putting their minds into harmony with the mind of God, where mathematical truth was believed to reside. During that time, little new geometry was created, as everything was referred back to the authority of Euclid. The Temple Geometers faced no such constraints. They were inspired by Euclid, but not bound by him. The growth of geometrical knowledge in Japan was explosive. And the centers of that growth were Zen and Shinto temples.

Fukagawa suggests the magnitude of his own achievement in his Preface: “When I became a high school mathematics teacher forty years ago, I studied the history of Western mathematics and would present some of this historical material to my students. In those days, it was said that traditional Japanese mathematics had no material of any value for high school students.”

By auspicious coincidence he was given an obscure text that he managed to decipher, from which, “I found that traditional Japanese mathematics of the seventeenth, eighteenth, and nineteenth centuries had much good material for high school students.”

Our interest is not just in the quality of the mathematics judged by our standards, as in the special qualities of the endeavor: “We call this mathematical world “Japanese temple geometry.” The mathematics lovers who formed this world enjoyed solving geometry problems.”

This world of mathematics lovers assembled in a temple is pictured in this unusual sangaku, which also poses three problems. 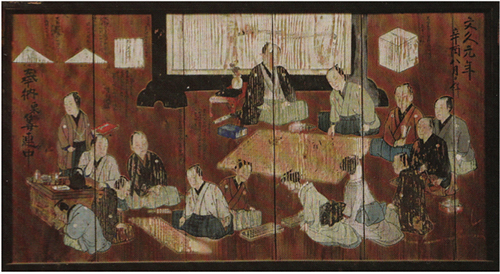 The group on the left includes two women and a child who are learning to use a Japanese abacus. On the right the teacher is leading a discussion of geometric calculations that involve solving higher degree equations. (Plate 4 in Sacred Mathematics)

When Temple Geometry met Western mathematics the latter won, because math-based technology gave Commodore Perry bigger guns and faster ships. Math continues to be a vital weapon for our military, and also contributes to many aspects of the unsustainable destruction of our living environment. In stark contrast, Temple Geometry, which was cultivated for peaceful purposes, for personal development and pleasure of the Temple Geometers, was part of a more stable and harmonious culture.

From the viewpoint of the Temple Geometers, it is our relationship with mathematics they appears badly out of balance. They may have been at one extreme, where mathematics was widely enjoyed and understood, but rarely applied; we have gone the other way, with mathematics central not just to technology and war, but also to communication, medicine, economics, education, etc. Yet all too many of us suffer negative emotions around math, from fear and loathing to boredom and indifference. Our view of mathematics is profoundly influenced by the dominant beliefs of the guild of academic mathematicians, which place mathematics above culture and beyond us. We are likely to feel powerless when decisions are made on mathematical grounds. Perhaps we could learn from the example of Temple Geometry how to reclaim our mathematics for peaceful purposes, to see in it the potential for pleasure and growth rather than domination, to experience it as “our most fascinating and imaginative art form”, rather than as a foundation for commerce and war (quote from the subtitle of Paul Lockhart’s lovely little book A Mathematician’s Lament). We would need to take it seriously as an integral part of our culture.

The widespread enjoyment of contemplating such problems on multiple levels points to a culture where math anxiety was not rampant, where people were at home with mathematics and did not regard it as alien. They were free to experience it as play, but play with serious intellectual, aesthetic, and even spiritual dimensions. The pleasures can be greatly magnified by exploring problems with a dynamic geometry program like the wonderful (and free!) GeoGebra which I have used to create the geometric figures in Japanese Temple Geometry on Beautiful Trees. The Temple Geometers would have loved GeoGebra.

After 1854, Japan came to devote a national effort to catching up with the West, and with the USA in particular. The STEM disciplines of science, technology, engineering, and mathematics were intensely cultivated. After 87 years, Japan paid Commodore Perry back at Pearl Harbor. Math played an even more direct role in the end of WW II, since the weapons used at Hiroshima and Nagasaki were unlike any that had come before, both in their destructive force and in their essentially mathematical nature. Our mathematics-based weapons technology had triumphed again. And again Japan tried to catch up, this time by embracing atomic power, a choice starkly illuminated by the Fukushima meltdown.

We leave Part I perhaps feeling some of the heavy pain associated with mathematics on different levels, and enter Part II, where we will take a non-traditional approach to three Temple Geometry problems, introducing each with a slide or two from Japanese Temple Geometry on Beautiful Trees.